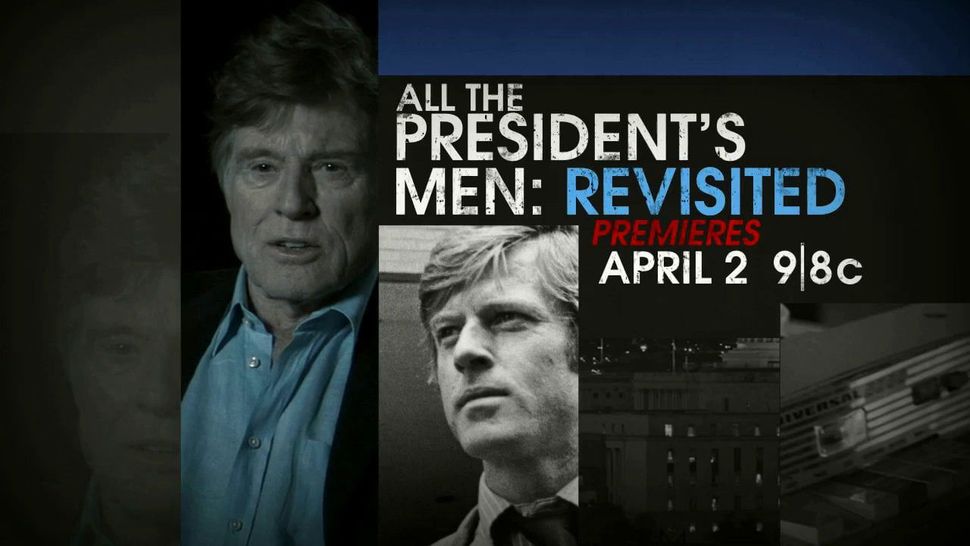 What’s a poor television network to do on a Saturday night when much of the nation will be tuned to NBC to watch “Saturday Night Live” recap the most bizarre week in America’s most bizarre presidency? What could possibly compete? How can you match SNL’s merciless send-up of the Trump-Russia scandal, with its lies, firings and apparent cover-up threatening to upend Donald Trump’s presidency?

If you’re Cinemax, a cable channel that knows a few things about being an also-ran, you run “All the President’s Men,” starring Robert Redford and Dustin Hoffman as Bob Woodward and Carl Bernstein, respectively. Alert readers remember the gripping 1976 movie retelling of the Watergate scandal, with its lies, firings and real cover-up that toppled Richard Nixon’s presidency.

The trouble with Cinemax’s choice is that the analogy between Trump-Russia and Watergate is far from perfect. For one thing, the underlying crime in the Watergate scandal was a cheap burglary. The president was dethroned not by a petty break-in but by the illegal cover-up. As the facts emerged, the entire nation was enraged, the president resigned in disgrace, and 69 Nixon aides and allies were indicted and 48 convicted for their roles.

Underlying the Trump-Russia scandal, by contrast, is the very real suspicion by the nation’s leading intelligence and law enforcement agencies that the White House is occupied by a con man who colluded with a hostile power that was trying to undermine American democracy. If that’s properly investigated and confirmed, it will prove a lot more serious a crime than a burglary.

What’s more, it keeps getting worse by the day, as Trump piles one debacle atop another — some in broad daylight, others under a hilariously bungled cloak of darkness. At first there were minor flubs, like threatening to invade Mexico and hanging up on the prime minister of Australia. Then came serious missteps like firing FBI director James Comey. Now we enter the realm of implausible: openly blabbing state secrets — ours and Israel’s — to the Russian foreign minister. Nakedly pressuring the FBI director to stop investigating the mess the president has created. At this point we’ve left political drama and entered the realm of slapstick science fiction.

There’s another disparity between the two scandals: The Watergate scandal ended in the downfall of a president and a victory for the rule of law. Our constitutional system of checks and balances worked as Congress, controlled by the opposing party, stood up to the White House. At this point in the Trump-Russia scandal there’s no reason to believe that this Congress, under hyper-partisan control of the president’s party, is up to the job. To all appearances, the congressional majority cares more about the Republicans than about the Republic. The nation may be helpless.

Perhaps a better analogy would be the Iran-Contra scandal. That was a genuine crisis of democracy and national security, as Trump-Russia seems to be. Ronald Reagan’s White House was found in 1985 to be selling weapons illegally to its arch-enemy Iran. The scheme was intended to finance a Central American guerrilla war run illegally out of the White House basement. The plot, much like the current one, shocked the coastal elites but failed to arouse an already divided nation. The White House successfully withheld key documents; an investigative commission handpicked by Reagan found no evidence of presidential involvement, and a grand total of 14 officials were indicted and 11 convicted. Five cases were thrown out on appeal; the rest were eventually pardoned by Reagan’s vice president and successor, George H.W. Bush.

Knowing all this, Cinemax might have chosen to counter SNL with the 1964 political thriller “Seven Days in May,” in which a group of war-hungry officials plots to undermine the too trusting president.

The trouble with this analogy is that Reagan, unlike his fellow entertainer Trump, had accumulated considerable government experience before entering the White House, and he managed to portray himself to the nation as a genial grandpa rather than a spoiled brat. Whether Reagan was actually a wily schemer or an absent-minded dupe of the Iran-contra, conspirators may never be known. It could be that the right flick for this saga would be “Dave,” the 1993 Kevin Kline comedy in which the president spends the entire movie in a coma.

Trump, by contrast, seems intent on composing his own indictment papers almost daily. Is he a wily schemer, pulling an impossibly complex fast one on us and our foes alike? A naive, incompetent blowhard trying earnestly to learn a job to which he’s hopelessly outmatched? A Russian dupe — or worse, a collaborator? Or, as seems increasingly likely, a deeply damaged soul, a clinical narcissist with the conscience and attention span of a 3-year-old, wandering through the American government and breaking every shiny object he sees? Are we watching a remake of “The Manchurian Candidate,” the 1962 thriller about a foreign agent planted in the Oval Office? Or “Being There,” the 1979 black comedy about a dimwit who stumbles cluelessly to the top?

It could be that we’re aiming too high, looking for too perfect an analogy. Maybe we should just concentrate on comparing elements of the story, or individual characters. Take, for example, Rod Rosenstein, the deputy attorney general.

Appointed just weeks ago, he’s been thrust abruptly into the spotlight because his boss, Attorney General Jefferson Beauregard Sessions III, had to recuse himself from the entire Trump-Russia imbroglio due to his own role in the Trump campaign. Also because he failed during his confirmation hearings to report his own meeting with the Russian ambassador, which for some reason hasn’t brought an indictment for lying to Congress. Sessions’s recusal leaves deputy Rosenstein solely responsible for the decision of whether or not to appoint an independent prosecutor to pursue the case.

Now our analogy is fairly easy: This is like the Bill Clinton indictment, in which another obscure Jewish administration employee, White House intern Monica Lewinsky, held the nation’s, um, fate in her hands. Lewinsky’s role in the Clinton crisis became critical January 21, 1998, when Matt Drudge reported the existence of her famed blue dress, with its DNA stain proving her dalliance with the president. That led to Clinton’s questionable grand jury testimony, which in turn led to his impeachment.

That very evening of January 21, with the nation in an uproar over the blue dress, Clinton met in the White House with Benjamin Netanyahu, the visiting Israeli prime minister. Netanyahu was expecting Clinton to read him the riot act over the stalled peace process. Thanks to Lewinsky and her blue dress, Clinton had other things on his mind, and the expected U.S. reprimand was forgotten. Some pro-Israel observers at the time were comparing Lewinsky to the biblical Queen Esther, whose romance with the gentile king of Persia saved the Jewish people from disaster just as they believed Lewinsky’s dalliance did for the Jewish state.

It’s now up to Rosenstein to decide which way he wants to send the Trump-Russia investigation — to an independent inquiry by a special prosecutor or into the tender arms of the Republican Congress. Perhaps, then, the movie Cinemax should have aired was the epic 2006 melodrama “Queen Esther: One Night With the King.”