On Intermarriage, The Conservative Movement Is At Odds With Its Members 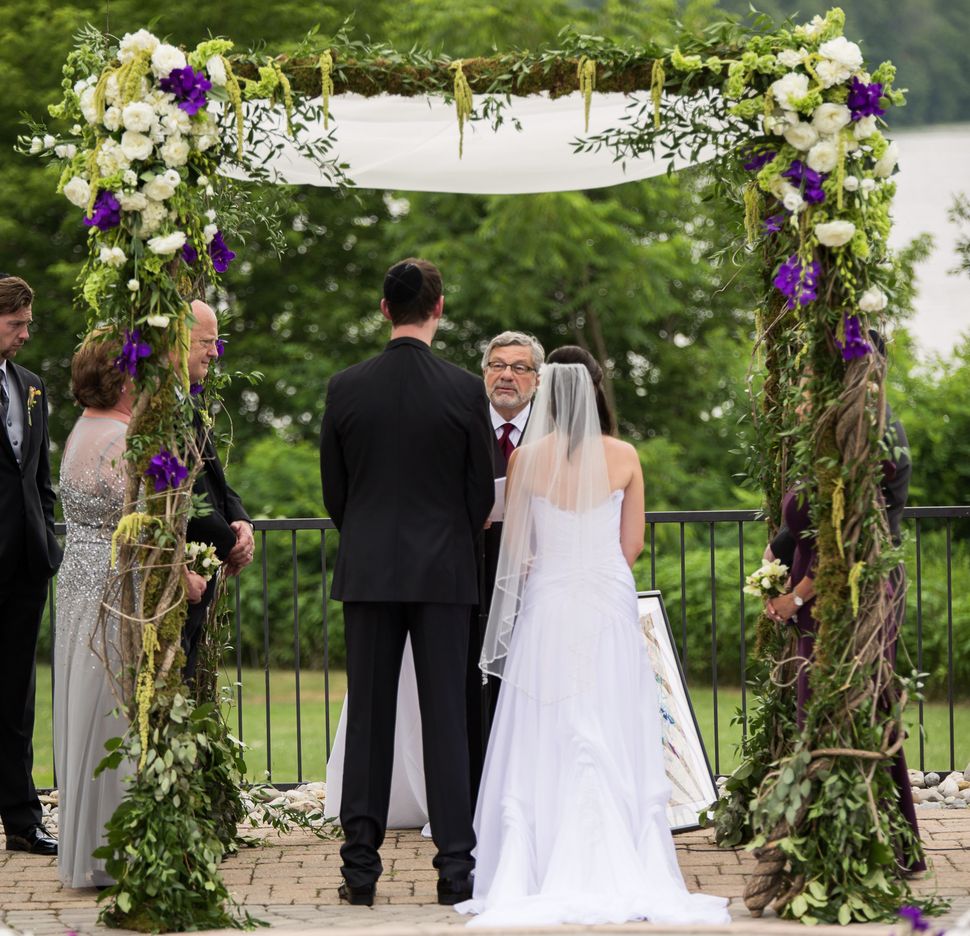 The current crisis in Conservative Judaism can be traced to a potentially fatal flaw that has been present in the movement since its inception: It has never been one movement. It is really two movements: The movement of its rabbis and philosophical leaders, and the movement of its constituents, the laity. For generations, this tension could be overlooked. Indeed, it underlay the appeal of the movement. But it is no longer sustainable. And intermarriage is one of the phenomena that demonstrates why this is so.

Marshall Sklare, in his 1955 book Conservative Judaism, documented this tension. To its rabbis and philosophers, Conservative Judaism is rooted in the 19th century school of Wissenschaft des Judentems, the study of Jewish sources using critical, scientific analysis. Conservative rabbis were eager for a way to “conserve Judaism” and stave off the Reform movement. They wanted to preserve the idea that Halacha, Jewish law, governs the public and private life of a Jew. But they also recognized the need for change, and believed that scientific and historical analysis of Jewish sources could lead to a controlled modernization that would not diminish loyalty to the fundamentals of a sacred tradition.

But this was not why Conservative Judaism appealed to its constituency. Sklare wrote that members of Conservative congregations would explain their affiliation as “a ‘halfway house’ between Reform and Orthodoxy.” Conservative Judaism, “while not orthodox, derives from familiar sources; while not completely reformed, it is sufficiently advanced so as to be ‘modern.’”

For first- and second-generation Americans eager to become new Americans but also intent on preserving their Jewish identity, this was ideal. Conservative Judaism was traditional and familiar. The prayer service was largely in Hebrew. Men covered their heads and wore tallitot. There was respect and reverence for tradition. But there were also elements of “modernity.” The rabbi preached and led some of the prayers in English. Men and women sat together. Some congregations utilized the organ in its worship.

And, critically, it was understood that no one monitored your life outside of the synagogue. Whatever the rabbi preached from the bimah, how you lived was your own business. This was a tacit bargain made between rabbi and congregant. The rabbis preached living in accordance with Halacha. The members lived their lives autonomously, selectively deciding what, if any, of Jewish living they carried with them when they left the confines of the synagogue.

There are many reasons why this bargain does not work any longer. But it is intermarriage that clearly breaks it, and lays bare how threatened the future of Conservative Judaism is by this internal contradiction.

Intermarriage is different from all other issues that face Conservative congregations. When a Conservative Jew decides to marry someone who is not Jewish, and invites their Conservative rabbi to officiate, rabbi and congregant can no longer sidestep each other. When that beloved rabbi refuses to officiate, there is a consequence in the private life of the congregant. The public and private realms are thrown into irreconcilable conflict. The synagogue becomes an obstacle in the life of the family, an agent of rejection. When the rabbi suggests a Reform colleague to officiate at such a marriage, or offers no suggestion at all, the member is left to ponder, “Why should I continue to participate in this community that has let me down at a moment when I need, and desire it, most?”

I experienced this gap between the rabbinic community and congregants when I was expelled by the Rabbinical Assembly, the association of Conservative rabbis, for officiating at intermarriages, a violation of the RA’s “Standards of Rabbinic Practice.” Although I was punished by my colleagues, the response I received from congregants, — the constituency of the Conservative movement — has been overwhelmingly the opposite. I received a level of affirmation that startled me. The Rabbinical Assembly and the Jewish Theological Seminary may adamantly reject the idea that Conservative rabbis should officiate at interfaith marriages; the Conservative constituency overwhelmingly believes they should.

Intermarriage is one of the clearest manifestations of the consequences of the gap between rabbis and constituents, which I believe is at the core of the crisis in Conservative Judaism today. But the fundamental issue is that while leadership still perceives Conservative Judaism as a halachic movement, its constituents do not. For them, Judaism is not about law. It is a matter of the heart and spirit. It is about intent, feeling, and identity. And when it comes to intermarriage, it is about love. It is not about adherence to technical standards that are arcane and burdensome, that lack transparency, and make life harder and more difficult. Like most non-Orthodox Jews, members of Conservative synagogues are seeking religious communities that enable them to celebrate the milestones of their life with joy and meaning, and which help them shoulder the burdens of a challenging society with greater confidence and purpose.

But where they seek peace, Conservative Judaism offers Halacha. Where they yearn for fulfillment, they are given the message that they are Jewishly inauthentic. Where they crave acceptance, they are judged.

The irony is that there are many Conservative rabbis and their congregations that understand this. These synagogues are changing as rabbis and constituents work together to fashion a new vision for contemporary Judaism. They do this despite the official positions of the Conservative movement. As a result, the members of many thriving Conservative congregations are loyal to their rabbi and synagogue and proud of their affiliation, but they have no allegiance to the “Conservative movement.” These synagogues are rapidly becoming post-denominational by default, because the institutions of Conservative Judaism are viewed as irrelevant, if not obstructionist, to them.

As a movement, Conservative Judaism remains obsessed with boundaries. It is fearful of the opprobrium of the Orthodox and afraid of being confused with Reform. As a result, it is deaf to the cry of its members. It is a movement afraid to change and is therefore in danger of becoming irrelevant. To paraphrase Rabbi Abraham Joshua Heschel, the movement worries too much about the purity of dogma and not enough about the integrity of love.

I have been a Conservative Jew all my life. It is part of who I am. I am pained by the movement’s problems and the oft-heard, paralyzing, apocalyptic visions of the Jewish future invoked to justify an unwillingness to entertain bold change. It bespeaks a fundamental lack of faith. But why should we lack faith? As students of Jewish history, Conservative Judaism’s leadership should be aware of the demonstrably robust quality of the Jewish experience. Have we not learned that Judaism is not a fragile flower that needs to be fenced in? Rather it thrives when liberated, allowed to grow naturally, to change and evolve. Judaism is nurtured by the dialectic with host cultures, not diminished by it.

The Conservative movement needs to believe in the Jewish future, not be afraid of it. It needs to let go of the paralyzing fear that keeps it wed to the issues of the past. It is its efforts to protect and preserve out of fear that will, in the end, lead only to the very result that is feared the most.

On Intermarriage, The Conservative Movement Is At Odds With Its Members