No, Jewish Republicans Aren’t About to Join the Alt Right 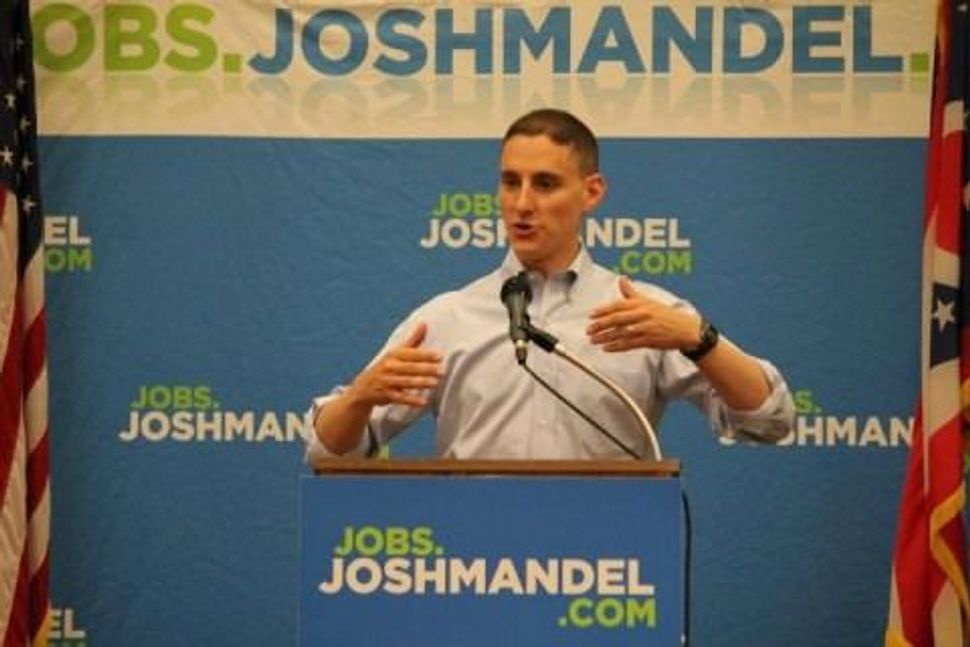 In an opinion essay that appeared recently on these pages, my colleague Peter Beinart described the tiff that broke out in mid-July between the Anti-Defamation League and Ohio state treasurer Josh Mandel, a prominent Jewish Republican politician. The tiff revolved around an ADL research report issued July 18. Titled “From Alt Right to Alt Lite: Naming the Hate,” the report describes the new right-wing hate groups that are gaining mainstream influence in the Trump era. It also names some of their leaders. On Twitter, Mandel defended some of these newly named hatemongerers, calling the ADL “a partisan witchhunt group targeting people for political beliefs.”

Beinart believes that this trend – of Republican Jews making common cause with the Alt Right – is going to become par for the course in the Trump era. But he’s wrong. Here’s why.

Jewish Republicans Aren’t About to Join the Alt Right

Beinart’s main point is that Jewish Republicans are about to move toward Breitbart-style politics and open flirtation with the Alt Right, bigotry and all. The reason? “That’s where the votes are.” In fact, that’s highly unlikely, once you look at who the Jewish Republicans actually are.

The biggest hole in the analysis is that chasing the voters isn’t as urgent for Jewish Republicans as it is for non-Jewish Republicans, because there are so few Jewish Republicans in electoral politics. Consider: Of four Jewish Republicans named in Beinart’s column, only Mandel has ever run for office. The other three he mentions include two journalists, the Weekly Standard’s Bill Kristol and Breitbart’s Joel Pollak, and one academic and frequent political appointee, Paul Wolfowitz.

The fact is, Jewish Republicans are a sizeable, talented and influential group, but they rarely hold elected office. Their politicians pale in numbers and influence before two other subgroups: donors and pundits. By pundits we mean conservative Jewish journalists and academics. The pundits may be further subdivided into the neoconservatives, a cohesive, influential bloc that includes Kristol, John Podhoretz, Max Boot, Danielle Pletka, David Frum, Jonathan Tobin, Bret Stephens and others, and a smaller, more scattered group of harder-line rightists like Pollak, Matt Drudge and David Horowitz.

Among non-elected Jewish Republicans, a minority stands with Trump, notably megadonors Sheldon Adelson and Ronald Lauder. The most visible subgroup, the neoconservatives, are nearly unanimously anti-Trump. A few, like Max Boot, have even begun calling themselves “former Republicans.” The neoconservatives have neither an army nor a vast voter base, but they strongly influence Jewish conservatives’ thinking.

What can we expect from the Jewish Republicans whose careers actually depend on voters? Alas, there’s no clear answer.

Jewish Republicans holding or seeking elected office are too few and too diverse to characterize neatly. But if there’s a common denominator that captures even a plurality, it’s “moderate.” A serious lurch to the right by Jewish vote-getters is probably a contradiction in terms.

It wasn’t always thus. In the 1950s and 60s, Jewish senator Jacob Javits gave his name to a whole wing of the GOP that didn’t blanch at the term “liberal.” In the mid-1980s, four of the eight Jews in the Senate were Republicans. Today, there are no more than a dozen or so Jewish Republicans nationwide holding state or federal elected office, including a governor (in Missouri), two congressmen, a handful of state legislators and one ambitious state treasurer.

That’s in sharp contrast with elected Jewish Democrats, who number easily over 100. Their numbers allow them to behave more like other politicians. They tend to have durable careers and to follow the standard politician’s career route, rising from city council or legislative aide to state and then national office. They’re numerous enough in Congress and states like New York and Florida to congregate in occasional, informal blocs.

Elected Jewish Republicans, by contrast, are more often loners. Frequently they’re eccentric or volatile types who last a term or three before returning home. Among the few with stable careers, the most common descriptor is moderate. Hard-line Jewish conservatives rarely last long, in part because their target voter base tends to be Christians who tend to want to vote for a Christian. Eric Cantor, the long-serving Virginia congressman, long the sole Capitol Hill Jewish Republican, lost his 2014 primary — while serving as House majority leader — to a primary challenger usually described as a Tea Party activist but actually a voice of the Christian Right.

No elected Jewish Republican knows the parlous state of Republican moderates more acutely than the speaker of the Texas state house, Joe Straus, arguably the most influential Jewish Republican in elected office today. He’s often described as the last moderate standing in a Texas Republican party that’s turned massively toward the Christian right. For Jewish Republicans, he’s Horatio at the bridge. Something in their party doesn’t want them anymore.

The ADL Wasn’t Always About Israel

To make his case, Beinart also argues that the ADL was “best known” until recently for tarring Israel critics as anti-Semites. He should check his calendar. The ADL actually pioneered that equation in 1968, just after the Six-Day War — and dropped it by 1993.

Before 1967, mainstream Israel viewed its conflict with the Arabs as a clash between two peoples claiming the same land. The best presentation of that view is still Vladimir Jabotinsky’s 1923 essay, “The Iron Wall.”

By turning the conflict into a case of anti-Jewish bigotry, the ADL added a new moral dimension to counter the growing post-1967 acceptance of Palestinian claims. Painting Israel-bashing as anti-Semitic had the additional benefit of putting the Israel issue squarely on the ADL agenda, previously focused exclusively on fighting prejudice.

The anti-Israel-as-anti-Semitic strategy started to unravel in the 1980s. It wobbled in the moral fallout from the 1982 Beirut massacre. It shattered amid the widening Likud-Labor policy rift over territory. By 1993, when Yitzhak Rabin and Yasser Arafat signed the Oslo peace accords, the ADL had largely abandoned that argument. Only pockets of conservative resistance remained. The league even began playing a quiet role as mediator between the community’s mainstream pro-Israel leadership and newly vocal Jewish peace groups like Americans for Peace Now.

Muslim Rights Are Important — But Not Exclusively So

In Beinart’s essay, the state of American politics is measured almost entirely through the prism of Muslim rights. That’s a vital issue, both politically and morally, but it’s not the only issue. Indeed, resolving the tension between minority rights and economic justice is the central challenge facing Democrats today. It divides Republicans, too, though less visibly than Democrats.

The topic is too important and too complex to be dealt with quickly in a catalogue like this. We’ll discuss it at length in the not too distant future.

This isn’t a new ADL

Beinart says at the outset that the ADL-Mandel exchange “would have been unthinkable two years ago,” since it’s only in “President Trump’s era” that “the group’s new national director, Jonathan Greenblatt, has thrown the organization into the fight against the nativism and bigotry rising on the American right.”

Unthinkable? Maybe that was true once, but for different reasons. In 1964, for example, when Random House published “Danger on the Right,” the 300-page exposé of nativists and bigots by ADL national director Ben Epstein and general counsel Arnold Forster, no Jewish Republicans defended the extremists. That would have been unthinkable back then.

In fact, the ADL had been infiltrating and exposing the extreme right nonstop since World War II. Following the turbulent 1960s it began targeting groups on the left as well. Many liberals never forgave it.

But dangers on the right have only metastasized, especially since the Reagan administration opened its doors to a clown car of extremists. In an increasingly polarized America, ADL reports became explosive stuff, none more so than 1994’s “The Religious Right: Assault on Freedom and Tolerance in America.” The 170-page exposé sparked a furious counterattack led by televangelist Pat Robertson of the Christian Coalition, an influential Republican and a key target of the ADL report.

The furor rattled the Jewish community. Dozens of prominent Jewish conservatives signed newspaper ads attacking the ADL. Young pundit Bill Kristol, in a Forward interview that fall, called it “shortsighted and self-destructive for a Jewish organization like the ADL to unjustly and gratuitously alienate Christian conservatives.” He accused the ADL of helping Democrats to “demonize religious conservatives.”

The battle ended in 1995, when journalists noticed a 1991 Robertson book, “The New World Order,” in which he painted conspiracies by shadowy “European bankers” with names like Rothschild and Warburg. Robertson was forced to apologize. The ADL notched a victory. On the other hand, Robertson is still around, and he’s not even the GOP’s far-right flank anymore.

Why This All Matters

Anyone, liberal or conservative, who wants to engage politically with the Jewish community, as so many currently do, will get nowhere if they don’t learn how the community works, who and what are its moving parts. The Jewish community is, among many other things, a quasi-political entity that plays a recognized role in broader American society. How it plays that role depends largely on who bothers to learn the rules and show up. These days, conservatives are better at that than liberals, though that’s hardly the whole story. There’s an important lesson to be learned in the continued rise of elected Jewish Democrats and near-disappearance of elected Jewish Republicans that has yet to be explored.

Either way, whoever is up or down at any moment, we all have a stake in the system. We all suffer when it’s broken.

No, Jewish Republicans Aren’t About to Join the Alt Right