To The Right And The Left: Stop Comparing Everyone You Don’t Like To Nazis 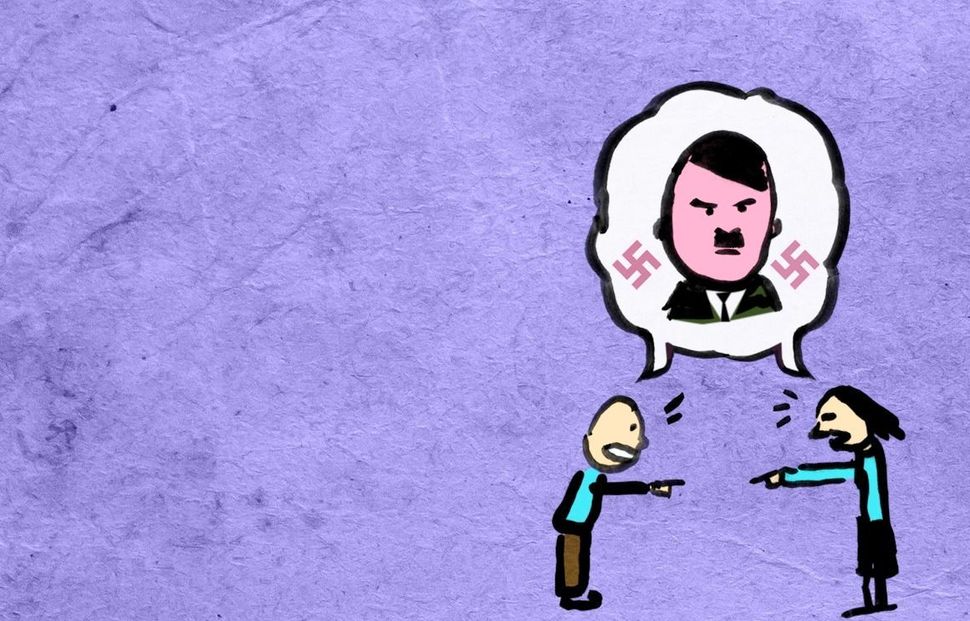 Following events in Charlottesville, with Neo Nazis on the American street and President Trump’s abject defense of “Southern heritage,” there have been two types of response. One is from the anti-Zionist left. The other is from the Jewish right. But though the authors of these responses may believe themselves to be radically at odds, they are mirror images of each other. The two types of response are in fact structurally identical, both trading in a false equivalency.

The argument from the left makes the spurious claim that Zionism is a form of supremacy, just as bad as the white ethno-nationalism expressed by neo-Nazis and the alt-right. The argument is buttressed by the support that rightwing Zionism receives from parts of the alt-right, as well as by President Trump’s so-called “support for Israel” and by the deafening silence from Prime Minister Netanyahu about Neo Nazis in Hungary and his anodyne comments about the same in the United States.

For all that, it is a spurious comparison. What the argument overlooks is that Israel, for all its problems, remains a democracy. The citizens of Israel are multi-ethnic, and their rights, technically, do not depend on race or creed. That Israel is an unequal democracy and fails to live up to these ideals is for many, including this writer, a matter of fact; but this does not a white supremacy make. That Israel under the leadership Prime Minister Netanyahu in practice undermines the constitutional norms does nothing to disqualify the importance – even the centrality — of these founding values of equal rights to “the Zionist idea.”

In fact, in his novel Old-New Land, Theodore Herzl clearly states that an anti-democratic, ethnocentric Jewish society is constitutionally at odds with Zionism. David Littwak, Herzl’s prototype of the young Zionist, desires to establish a New Society based not on nineteenth-century ethnic nationalism but on nineteenth-century pioneers in cooperative life in England, Germany, France, and Ireland. This New Society is at peace with its neighbors, part of a network ranging from Cairo to Damascus to Beirut to Baghdad. Opposed to religious privilege, Litvak imagines a new society, in which “religion had been excluded from public affairs once and for all.” The New Society was not even a state, but rather a cooperative association composed of affiliate cooperatives. In the end, Litvak warned his fellow citizens that “all your cultivation is worthless and your fields will revert to barrenness unless you foster liberal ideas, magnanimity, and a love of mankind.” In other words, for Theodore Herzl, without liberal values there is no Zionist project.

The second argument that one hears these days comes from the Jewish right. It echoes the one made by President Trump after the march in Charlottesville, and it consists of the spurious claim that leftist counter-demonstrators are just as bad as neo-Nazis and the alt-right. Like the equivalency between Israel and white supremacy, this argument is buttressed by a kernel of truth: the anti-Semitism problem that can seep into the exceptional animus expressed against Israel at the anti-Zionist wing of the intersectional left.

Lacking all sense of perspective and proportion, the argument that anti-Semitism on the left is just as bad as it is on the right assumes that the radical left is anti-Semitic to the core. It relies on equating anti-Semitism to anti-Zionism, another false equivalency.

Reasonable people have the right and obligation to debate what is right and wrong with Israeli policy and society. Those who call this anti-Semitism disgrace themselves.

But beyond that, what kind of threat is actually posed by those on the left – even by those who most vociferously reject the existence of the State of Israel? Israel is an economically and militarily strong sovereign nation with deep ties, both in this country and internationally. The kind of “threat” posed by the anti-Zionist left is a minor political threat to what for so many American Jews is a core political interest, namely support for the State of Israel and its well-being. The argument equating the anti-Zionist left and the alt-right confuses a fringe, political phenomenon on the left with the existential threat posed to Jewish life and limb posed by racists and Nazis currently egged on by the highest office holder in these United States.

There used to be a consensus, especially among Jews, that Nazis represented a special category, uniquely placed at the bottom of the barrel of political life. As a unique category, nothing – nothing at all – should be compared to Nazis. Watching people compare Israel with Nazis, or leftists with Nazis, one understands just how terribly amiss is our current political climate, buffeted by powerful political and racial hatreds in both the United States and in Israel.

This is our political environment today. Across the ideological spectrum of the American Jewish community, from the far left to the right, people need to start distinguishing rotten apples and oranges.

Zachary Braiterman is professor of Religion at Syracuse University where he teaches modern Jewish thought and culture. He blogs at www.jewishphilosophyplace.com.

To The Right And The Left: Stop Comparing Everyone You Don’t Like To Nazis