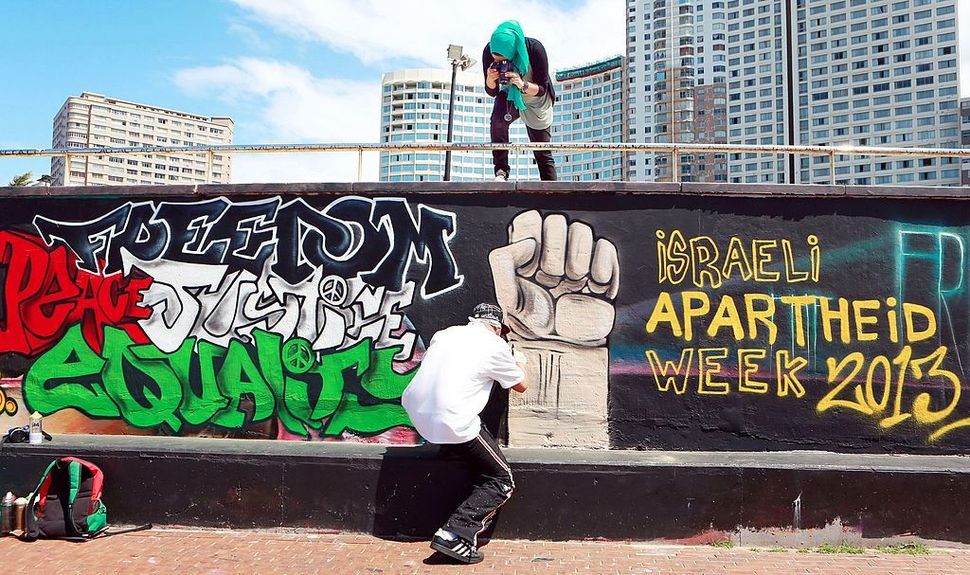 Last month, American parents across the country drove their daughters and sons to college to begin a new academic year. These parents had little to temper their excitement and optimism, except maybe some concerns about costs, or academic performance, or perhaps their beloved offspring’s choice of extra-curricular activities. American Jewish parents, however, were not quite so unburdened. They were, after all, knowingly sending their young innocents into campus wars run by committed professionals.

The campus wars targeting Israel have been ongoing for years. But they are also intensifying. There are a growing number of anti-Semitic attacks on campuses, which also include things like Israeli Apartheid Week, fake “walls”, months-long campaigns for student-body boycotts, faculty members who single out Israel in the classroom and the public square, faculty associations that solely target Israel, and streams of lectures by professional anti-Israel advocates.

Over the past 20 years, under the guise of anti-Israel activism, many campuses, including some of the most selective and influential in the Western world, have been transformed into Israel-hostile environments that directly and indirectly affect, often harmfully, a majority of Jewish students and, more broadly, Jewish life on campus.

But the Israel proxy war happening on college campuses isn’t just about the Middle East. While the ultimate goal of anti-Israel activism might be eliminating support for Israel by the U.S. government and the American public, getting there involves a crucial strategy that is the main goal of campus activism. That strategy, now a goal in and of itself, is the alienation of Jewish students from Israel, Jewish life and the Jewish community. And at that, the anti-Israel activists excel.

Ironically, the latest evidence of their effectiveness comes by way of a study conducted at Stanford University that purported to prove the opposite.

Produced by doctoral students in the Stanford Research Group in Concentration in Education and Jewish Studies, the scholars interviewed 66 Jewish students in five University of California campuses where key anti-Semitic incidents have been in the news.

What they found was surprising. The researchers concluded that Jewish students are fine. They rarely experience direct anti-Semitism, and while Israel-related politics on campus may make many of the interviewees uncomfortable, overall, the anti-Israel and even the pro-Israel counter-activism are not detrimental to the students. This is in no small part because they get out of the way by moving to the “sidelines” of the debate and proceeding with life as students normally would.

But that in and of itself is a huge price to pay. The study’s conclusions indicate that in order to avoid the confrontational nature of the debate, Jewish students are simply removing themselves from it, and by extension from much of campus Jewish life. And while the Stanford researchers conclude this is a victory, it’s actually evidence that Jewish students are victims of the war being fought against them.

It is also evidence that the Jewish community, despite the persistent campus efforts of groups such as StandwithUs, CAMERA and the ADL, has been unable to prepare or engage Jewish college students to withstand the swelling sea of anti-Israel criticism to which they are uniquely exposed. Even Birthright trips, which may be viewed indirectly as a counter-measure of sorts, last for only 10 days within a typical 4 year campus stay for students. And campus is where the wars are taking place. As the study explains, Jewish students found few places for debate about Israel characterized by curiosity and mutual respect; “To our interviewees, debate often deteriorated into ‘yelling.’”

This is no accident. A closer look reveals that the majority of anti-Israel activism is tactical, opportunistic and cynical. If ending the Occupation were the issue, other lengthy occupations, such as Turkey’s illegal one in Cyprus or China’s in Tibet, would be subject to campus campaigns. They are not. If Palestinian suffering were the issue, activists would be demonstrating against Lebanese, Palestinian Authority and Syrian maltreatment of the descendants of 1948 Palestinians. They do not. If human rights were the issue, dozens of countries would be in the campus “dock.” They are not.

Understandably, the response of most Jewish kids is to move to the “sidelines” and focus on their personal lives and studies. And, along with building a future constituency of Israel-hostile college graduates, that is precisely the intent of the anti-Israel professionals running the campus wars: to create enough noise to distance all but the most committed Jews.

None of this is accidental or grassroots. It is the outcome of an organized, well-funded, decades-old assault. At the same time, far-left Jewish groups have joined forces with key anti-Israel groups such as Muslim Students Association (MSA), Students for Justice in Palestine (JSP) and the boycott movement’s PACBI. As noted by the leader of Jewish Voice for Peace (JVP), a key group that has disrupted religious and commemorative Jewish events, the goal is to create a “wedge” in the Jewish community. The effect of this is to undermine liberal Jewish support for Israel and to segregate those who still dare to openly support the Jewish-majority state. While the non-Jewish groups demonize Israel and its supporters to the broad student population, anti-Israel Jewish groups serve as allies who can deflect accusations of anti-Semitism (“Not all Jews support Israel”).

It’s true that Israel, too, spends money on American college campuses. And there are some who have expressed concern that Israel participates in this proxy war by providing funding for counter-efforts, and therefore colors the views of Jewish students just as the hostile groups do. But like President Trump’s equating of neo-Nazi marchers with the protestors who fought them, this claim equates attacks with an attempt to defend against them. It equates false accusations of Israel’s genocide, ethnic cleansing, war crimes, apartheid, and racism with the defensive arguments countering those claims. Case in point: You don’t see Jewish students running dozens of “Arab Terror Week” campaigns.

But beyond that, the claims that Israel is funding these events are false. Even Birthright is only funded partially — about 25% — by Israel. Virtually all funding for any support for Jewish students on campus comes from private donors and some organizations. Perhaps unfortunately for the American Jewish community, Israel only came to recognize the importance of the campus wars in 2015. Its response — an initiative called Mosaic, has fallen profoundly short, offering a fraction of the promised funding, with about $66 million over 3 years split among Chabad and an Aish HaTorah offshoot — groups that rarely engage in campus Israel activism — and Hillel. The money promised to Hillel, true to Minister Bennett’s assurances that funding would not be used for political purposes, has so far been used to hire educators, not to engage in activism. The Israeli government did offer $250,000 on a joint venture with StandWithUs, but this is too small a sum to compete with the money being spent by the other side.

As for that other side — why are they fighting a proxy war on college campuses? What is the value of conquering these campuses? Why are these forces pursuing this strategy of campus and media wars?

Campuses represent the future. Today’s student is tomorrow’s politician, entrepreneur, voter and consumer. She or he is also tomorrow’s Jewish parent, synagogue volunteer and community donor. The campus wars are a strategy targeting the future of the Jewish community in North America.

Ultimately, by dividing the future Jewish community, the campaign seeks to transform and destroy the community’s perceived and actual political influence, certainly into the future. Without such influence, the thinking goes, Israel will eventually lose the American support that has been critical for its survival and growth.

The movement of Jewish students to the “sidelines” demonstrates the effectiveness of this campaign. Jewish students have been left with few options. They can maintain a connection to Jewish life on campus while seeking to avoid politics. This has become difficult because Jewish organizations tend to be populated by engaged Jewish students, and Israel remains an important element in the identity of most. Another option is to join the Jewish organizations and participate in pro-Israel activities. This is time-consuming, draining and socially costly. It also often forces relatively liberal students to side against the minority and social justice groups (a historic sweet-spot for Jews) that have been effectively recruited by the anti-Israel groups. Third, the Jewish students may join the anti-Israel parade. It is far easier to accuse someone of loving war crimes than it is to receive the accusation. Or, finally, there is what most Jewish students end up doing because all of the other options are unappealing: removing themselves from the debate entirely, often by ignoring campus Jewish life, their connection to other Jewish students, and certainly a serious connection to Israel.

No other community in North American or European universities has to face this type of engagement on campus. This is a war, and it is a war targeting the Jewish community, especially the community of the future, by going after Jewish students — by going after our kids. And they are winning.