Is Israel Trying To Turn American Jews Into Orthodox Right-Wingers? 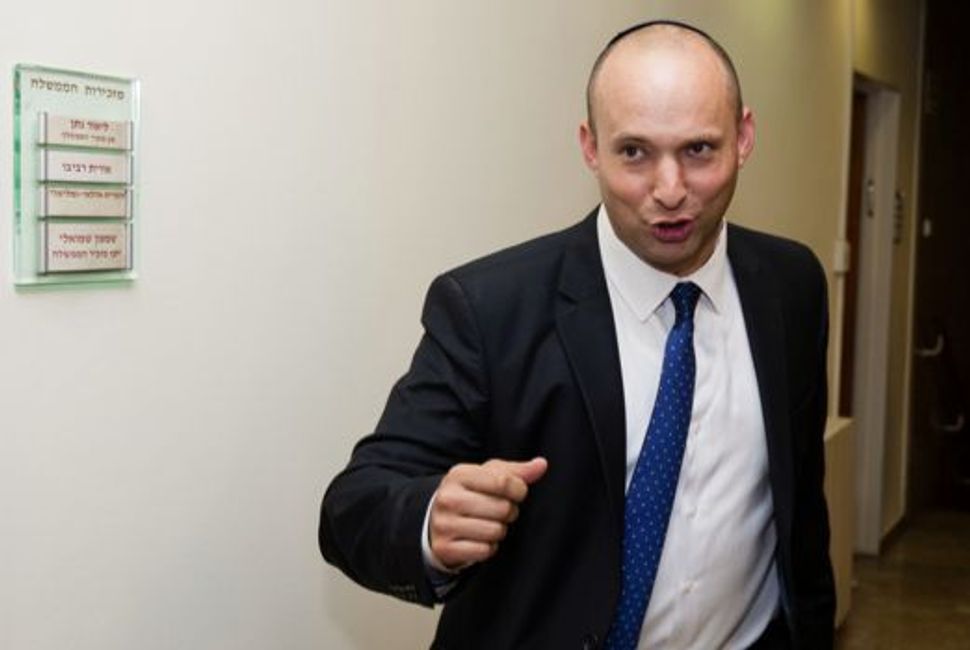 Running on Empty: Naftali Bennett is a man with much ambition. Image by Getty Images

The Israeli government has rolled out the first stage of its long-awaited Israel-Diaspora outreach initiative, which promised to inject hundreds of millions of dollars into a broad range of innovative Jewish identity programs.

One might say that the program unveiled in an August 12 announcement, a series of grants for outreach programming on college campuses worldwide, has fallen far short of original expectations. But that would be too generous.

Originally planned with a $300 million annual budget, one-third of it from the Israeli taxpayer and the rest from Diaspora donors, the program has launched instead with $66 million over two years, including $10 million in the first year from the Jerusalem government. And instead of the broad range of Jewish movements and ideas the program was to feature, it is launching with just three partners: Hillel International and two right-wing Orthodox Jewish outreach organizations.

The Israel-Diaspora Initiative was formulated in November 2013 at an international conference of community leaders in Jerusalem. It was supposed to remake Diaspora Jewish identity-building, working through a broad, interdenominational alliance of Diaspora Jewish movements and organizations, with backup from a range of Israeli government ministries.

In June 2014 the government approved an allocation of $50 million, half the original sum. It also authorized the formation of an independent company to manage the project and select Diaspora Jewish “partner organizations” that would develop and implement the innovative programming.

After three years of bureaucratic turf wars and political battles, a managing company launched with an Israeli government allocation of $10 million for the first year and a promise of $12 million in the second year. Twice that amount is to be raised by the three Diaspora program partners. The two-year total thus comes to $66 million, with the major fundraising burden now on the grantees.

The managing company, first called the Initiative for the Future of the Jewish People, then the Israel-Diaspora Initiative, was unveiled August 12 with yet another name, Mosaic United.

The three program delivery organizations are what’s left of the broad coalition of innovative Jewish movements that had been expected to join. In addition to Hillel, the roster includes two outfits that specialize in promoting Orthodox Jewish observance: the Chabad-Lubavitch Hasidic movement and a less familiar organization called Olami Worldwide.

As for the range of Israeli government departments meant to cooperate in the venture, that’s been reduced to one: the Ministry of Diaspora Affairs, headed by Naftali Bennett of the Jewish Home party, the main political voice of Religious Zionism and the settler movement.

The main Israeli nongovernmental partner that had been expected to participate, the Jewish Agency for Israel, dropped out in August 2015, protesting that under the Diaspora ministry’s management, the program’s “current reality has been changed in direct contradiction to both the spirit of the Initiative” and the government’s 2014 decision formally establishing it.

The original goal of the initiative was to strengthen Jewish identity among Diaspora Jews. But after the recent launch prompted objections to the Orthodox tilt of the program providers, Bennett issued a statement claiming, as reported by Haaretz, that “the activities would not be focused on issues of religion and Jewish law.”

Rather, Bennett was quoted as saying, “The activities on campuses throughout the world are the real answer to the growing anti-Semitism and the delegitimization of Israel on campuses.”

Back in 2015, though, days before the Jewish Agency’s withdrawal, Haaretz obtained an internal Diaspora ministry document that described the problems the initiative aimed to address. “In recent years,” the document said, “there has been a continuous erosion of the Jewish identity of communities around the world.” The erosion, the document went on to say, included the “undermining of the Jewish foundations of the family unit” and a “significant rise in critical discourse regarding Israel.”

The ministry document appears to explain the choice of the Orthodox partners. As part of its promotion of Orthodox observance, Chabad Hasidism touts a traditional version of Jewish family values, including rules on modest dress for women, “impurity” during menstruation and opposition to homosexuality.

Less well known is Chabad’s political role in Israel, where many of its rabbis and leaders are prominent in far-right, pro-settlement and anti-compromise activism. Several top Israeli Chabad leaders have become leading right-wing activists. Rabbi Yitzhak Ginzburgh, a senior Chabad educator and philosopher, has written in praise of the late Baruch Goldstein, who committed the 1994 Hebron massacre. Ginzburgh also mentored Yitzhak Shapira, co-author of the 2009 book “The King’s Torah,” which justified killing Palestinian babies because they might grow up to be terrorists. Another Chabad leader, Rabbi Shalom Dov Wolpo, raised money for the families of Jewish terrorists and has urged the death penalty — by a court, not vigilantes — for dovish Israeli leaders Ehud Olmert, Ehud Barak and Tzipi Livni.

Olami Worldwide is not a household name like Chabad. Repeated attempts to contact its leaders were unsuccessful. Its website describes it as an umbrella that works with some 300 organizations around the world, promoting Jewish education and trips to Israel. According to press reports and sources familiar with Jewish campus programming, the organization works closely with Aish Hatorah, an Orthodox outreach organization that rivals Chabad in its global reach.

Aish, as it’s familiarly known, began in the 1970s as a Jerusalem yeshiva proselytizing among young Jewish travelers and volunteers. Over the years it has expanded, opened offices in several countries and developed a sprawling, elaborate website that markets books and ritual objects, teaches Orthodox practice and promotes its extensive adult-education classes.

It has also spun off a number of side organizations, including several right-wing pro-Israel projects. The best known is Honest Reporting, a media watchdog group that spun off in 2000 and that has been independent since 2006.

Another spinoff, the Clarion Project, produces and distributes films that preach against the threat of radical Islam. It is widely regarded by civil liberties organizations as a prime purveyor of Islamophobia. One of its films, “The Third Jihad,” caused a scandal in the New York City Police Department in 2012 when it was revealed that the film had been showing in a continuous loop for months to officers at a department training facility.

The founder and CEO of Clarion, Raphael Shore, a former Aish media expert, also heads another organization, JerusalemU.org. It produces videos to promote Jewish identity, observance and attachment to Israel. One of its video series, “Habits of Happiness,” teaches Jewish ritual and traditional values as a path to personal meaning and inner peace.

Though the precise relationship between Olami and Aish is unclear, the executive director of Olami, Rabbi David Markowitz, previously served in several senior positions at Aish, including head of its New York office.

One prominent Aish devotee, Philadelphia businesswoman Amy Holtz, left the private sector after the organization inspired her to greater Jewish observance, as she related in an interview with the Jewish Exponent. She served for six years as president of Shore’s JerusalemU organization until last January, when she became head of the Israel-Diaspora initiative now called Mosaic.

Apparently, Israel believes that some combination of Holtz’s business and media savvy, Shore’s alleged Islamophobia, Aish and Chabad’s traditional family values and Jewish Home’s far-right politics is just what’s needed to fight campus anti-Semitism and win over the hearts and minds of American Jewish youth. But will the youth buy it?

Update: This piece has been updated to clarify that Honest Reporting has been independent since 2006.

Is Israel Trying To Turn American Jews Into Orthodox Right-Wingers?