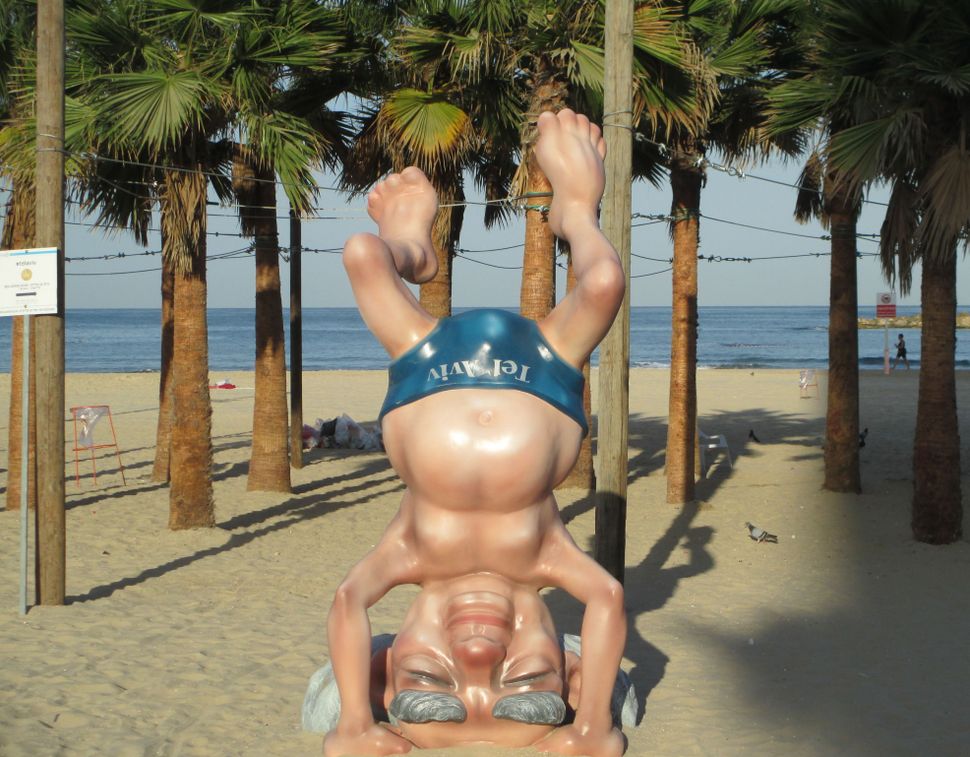 On Tel Aviv’s Frishman Beach stands a statue of Israel’s founding father, David Ben Gurion — on its head. Wearing only blue briefs branded ‘Tel Aviv’, Israel’s first prime minister performs a handstand in the sand in the iconic pose made famous in a photograph from 1955. This flippant tribute to Ben Gurion is the only statue of the leader in Israel—and it is one of only a handful of statues of historical figures across the country.

Around the world, a debate is raging over the removal of statues of controversial historical figures, from British colonialist Cecil Rhodes to US Confederate General Robert E. Lee. But Israel, where the battle for historical memory is no less acute, has been spared this argument over statues — because there are few statues over which to argue.

Israel’s closest controversy was over the bust of convicted rapist and former president Moshe Katsav at the President’s Residence. President Shimon Peres refused requests to remove it, arguing that one cannot rewrite history. (The bust now features a plaque, noting that Katsav was charged with and jailed for rape.) But statues are few and far between.

Why are Israeli public spaces so completely void of historical statues? According to conventional wisdom, the answer is the Biblical injunction against graven images: the Jewish state is free of statues because the Ten Commandments forbid sculpting idols, entailing both a religious prohibition and a cultural taboo. Erecting statues of heroes, the thinking goes, is un-Jewish idol worship. According to Professor Maoz Azaryahu of Haifa University, this was partly a matter of conscious policy. When the government and local authorities announced public contests to design new memorials in the 1950s, they specifically asked artists to display sensitivity towards Jewish tradition. In other words: no statues.

This taboo against statues is still relevant today. In 2005, the town of Tiberias commissioned a 2.8m-high statue of Maimonides, a replica of the one in Córdoba, for the twelfth-century rabbi’s gravesite. But citing Exodus, local Shas rabbis threatened a municipal political crisis. The plan was cancelled, and the statue was shipped to Fez in Morocco instead. (The frustrated artist also sent a scale replica to Professor Azaryahu, whose class studied the episode, and it now sits proudly in his house.)

Indeed, the few historical statues that exist in Israel are in its solidly secular bastions. Tel Aviv installed a statue of its first mayor, Meir Dizengoff, to celebrate the city’s centenary; it also unveiled a statue of Raoul Wallenberg, a replica of the one in Budapest, in 2002. The moshav of Tel Mond erected a modernist statue of its founder Lord Melchett in 1936. The kibbutz of Yad Mordechai hosts a heroic statue of its namesake, Warsaw Ghetto Uprising leader Mordechai Anielewicz.

But the religious prohibition on statues tells only half the story. The absence of statues across Israel speaks to the heart of the emergence of a vibrant, hybrid, native Israeli culture in the twentieth century, and the fascinating, dynamic interface between modernity and tradition. Indeed, two independent trends complemented and amplified this Jewish taboo.

Firstly, Israeli art emerged in an era when Western commemorative art was already becoming more abstract, Professor Azaryahu told The Forward. Whereas European powers erected monuments to their leaders in the nineteenth century, this style was increasingly identified with the Soviet bloc in the twentieth century. This trend in Western art, he argues, was mutually reinforcing with the Jewish prohibition on building idols. Indeed, Israel is completely covered in memorials—but they are almost exclusively symbolic. Even notable statues of people are symbolic, rather than figurative. Negba’s large bronze statue of an Israeli soldier, a pioneer, and a nurse honours those who fell defending the kibbutz against the Egyptians in 1948. But Natan Rappaport’s monument presents idealised representations of Israelis, not real people. Yad Vashem’s Warsaw Ghetto bronze reliefs, also by Rappaport, are similarly symbolic. Likewise, Ramat Gan’s monument to Jewish victims of Iraqi persecution shows an anonymous man absorbed in grief and prayer.

Statues of leaders, emphasises Israeli art professor Dalia Manor of Ben Gurion University, were simply “not very twentieth century”. By the time Israel was born, Western art in general had already moved away from glorifying heroes and leaders through statues. Britain is planning to install a new statue of Margaret Thatcher in Parliament Square, but the UK already has a rich tradition of commemorating leaders through statues. Israel emerged too late for such a tradition to take root.

Despite peppering India with statues of British royalty, British Mandatory authorities did not erect their own statues in Palestine. According to Professor Azaryahu, the only British statue was a bust of General Allenby, who liberated Jerusalem from the Ottomans — and it disappeared from Beersheba’s Military Cemetery during the Arab riots of 1936-37.

Secondly, the homegrown Zionist culture that developed in the early twentieth century was collectivist and egalitarian — the antithesis of the imperialist cultures that literally put their leaders on a pedestal. Israel was established by socialist pioneers of modest means, who wore their collars open and shunned the self-aggrandizement of leaders of imperial powers. Israel was born without class hierarchies, nobility, or a tradition of deference. Indeed, the only statue of a Jewish head of state in Israel is David Polus’s 1936 sculpture of King David, tucked away in Kibbutz Ramat David. And the statue of Tel Aviv Meir Dizengoff is deliberately anti-heroic, featuring an old man in a bowler hat atop a small mare.

Israeli culture was influenced both by Western nationalism and Soviet collectivism, says Professor Yael Zerubavel of Rutgers University — and its commemorative art represents the junction between these different traditions. Commemorating the past through the “collectivist ethos of patriotic sacrifice,” Israeli culture is unique in the world for its culture of “numerical commemoration” — a tradition of commemorating heroic events by the number of dead, Zerubavel argues. Israelis commemorate their dead in a radically egalitarian fashion, remembering each person on the basis of their membership in a wider group.

This culture, notes Professor Zerubavel, symbolically erases the distinct individuality of its heroes; conversely, attempts to commemorate individual soldiers separately from the rest of the group with whom they fell have always been met with a fierce backlash. And this same collectivist spirit, she argues, also served to discourage a culture of elevating historical leaders outside their context — whether through physical statues or otherwise. Nevertheless, the fact that Israel so commonly names streets after historical figures proves that its collectivism is limited, and that the Jewish injunction against building statues exerts its own powerful cultural push.

Israel’s streets and squares are virtually empty of statues commemorating historical figures, but that empty space is itself is a tribute to history: a monument to the emergence of a complex Israeli culture, forced to confront questions of memory and sovereignty while constructing and inventing itself in turbulent conditions. It represents the fusion of Jewish tradition with European nationalism, Soviet collectivism, and modernist art. And it tells the story of a vibrant culture that fervently idolizes its heroes, but strictly metaphorically, allergic to turning them into idols.