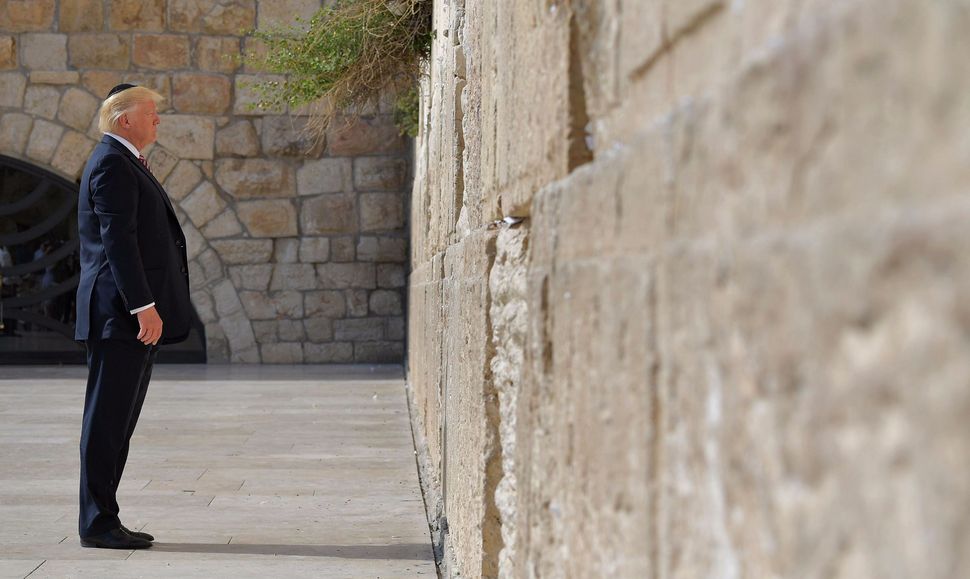 Donald Trump at the Western Wall in Jerusalem. Image by Getty

Donald Trump promised that he would move the United States Embassy from Tel Aviv to Jerusalem as one of his earliest acts as president. Like so very many things this man has said and promised, it turned out not to be true.

Now, there’s word that on Wednesday, Trump plans to announce that the U.S. will recognize Jerusalem as the capital of Israel, without bothering to move the embassy. It’s a play that even some of his own closest advisers think is a terrible idea, scrambling their earnest attempts to bring Israelis and Palestinians together by effectively allowing Washington to put its thumb on the scale of the most sensitive issue in this conflict.

Long-term, Jerusalem should be the official capital of Israel. It is the beating heart of the Jewish people and deserves to be recognized as such by the entire world.

Long-term, Jerusalem should also be the official capital of an independent Palestine. For Jews to ignore or minimize the devotion that Palestinian Muslims and Christians feel about the holy city displays willful blindness or worse.

Just as it is absolutely wrong for Muslims to deny Jerusalem’s Jewish heritage, so is it wrong for us to deny their attachment.

Polling I saw recently showed that Jerusalem is the most important issue for Palestinians in any negotiation with Israelis by a wide margin, and for many reasons. It, too, is the heartbeat of religious life, a locus of culture and (one day it is hoped) tourism. Without Jerusalem, the West Bank is effectively split into two.

This is why 300,000 Palestinians continue to live there, in ever concentrated and squalid conditions. As Jews increasingly encroach on East Jerusalem, holy sites like the Haram al-Sharif compound — which Jews call the Temple Mount — become even more important as one of the few places Palestinians can gather freely.

As a Jew, I can relate to this level of devotion because I feel it myself. That is why it’s imperative to come up with a plan that honors both narratives. A year ago, I suggested that if Trump were intent on moving the American embassy to West Jerusalem, then he should open one for the Palestinians in East Jerusalem at the same time. A “striking, symmetrical action like this could jolt the peace process to life and help re-conceive Jerusalem as a shared city,” I wrote.

That certainly may be too bold an idea for this President. But a unilateral declaration, as he is reportedly considering, will be disastrous for any long-term prospects of resolving this conflict.

Ladies and gentlemen, g’virotai v’rabotai, sayidati wa sadati, we have to learn to share. It’s the only way to bring peace to Jerusalem.

Are two states still possible? Ever the optimist, David Makovsky of the Washington Institute for Near East Policy, launched a new website last week called Settlements and Solutions, which uses civilian satellite data to provide a better understanding of settlement trends. Understanding the changing nature of the settlement movement, Makovsky argued in the Washington Post, makes an Israeli-Palestinian compromise possible.

As he told me, “The website does not say there is a will, but rather there is a way to go down that road.”

Time to bring back the Equal Rights Amendment? Could this political climate give rise to a return of the ERA? That’s the provocative question raised by Leigh Ann Wheeler, a historian at SUNY’s Binghamton University, in The Conversation. She cites a 2016 poll that 80% of the public thinks there’s already a constitutional amendment protecting equal rights for women. And when told that’s wrong, 90% support one.

And if you want inspiration about this moment, here’s a letter from Martha R. Birnbaum, a reader from Tampa, Florida, shared with her permission:

I finally got it. I am 75 years old and have been working toward an egalitarian Judaism forever, or at least since I became a Bat Mitzvah: when I wasn’t permitted, as a woman, to read from the Torah. If you look within sexual harassment, (which I and mostly every woman I knew experienced) and you go down deep, you will find “gender harassment.” Off the top of my head: not being able to lead services at Camp Ramah, staying home from “Bar Mitzvah” class on the day the boys were learning to lay t’fillin, and just yesterday, sitting in a Talmud class of five, where I was the only female, and being bullied by two of the men present. And I just sat and watched.

But no more. I understand what the younger women are saying. At every level, and at every age, we women have to speak out, no exceptions. If we don’t stand up in the merely annoying cases, the whole system just escalates to the behaviors we are seeing in these men who are, possibly, guilty of criminal assaults against women. No more excuses.

The royal engagement. Our delightful story by Jenny Singer about Prince Henry’s new fiancée, Meghan Markle, was far and away our most popular story last week.

If I have my history right, the last time the brother of a would-be British king was married in royal style was in July 1986, when Prince Andrew wed Sarah Ferguson. I was there, as a foreign correspondent — fanciest wedding I ever attended, even as a working stiff.

Looking forward. Somehow my invitation to President Trump’s White House Hanukkah party on December 7 got lost in the mail. Are you going? Let me know if the lamb chops are as delicious as in past years.

Remember to send your comments and questions to me at [email protected]. And if you want to weigh in on whether Trump should move the embassy to Jerusalem, Have Your Say here.