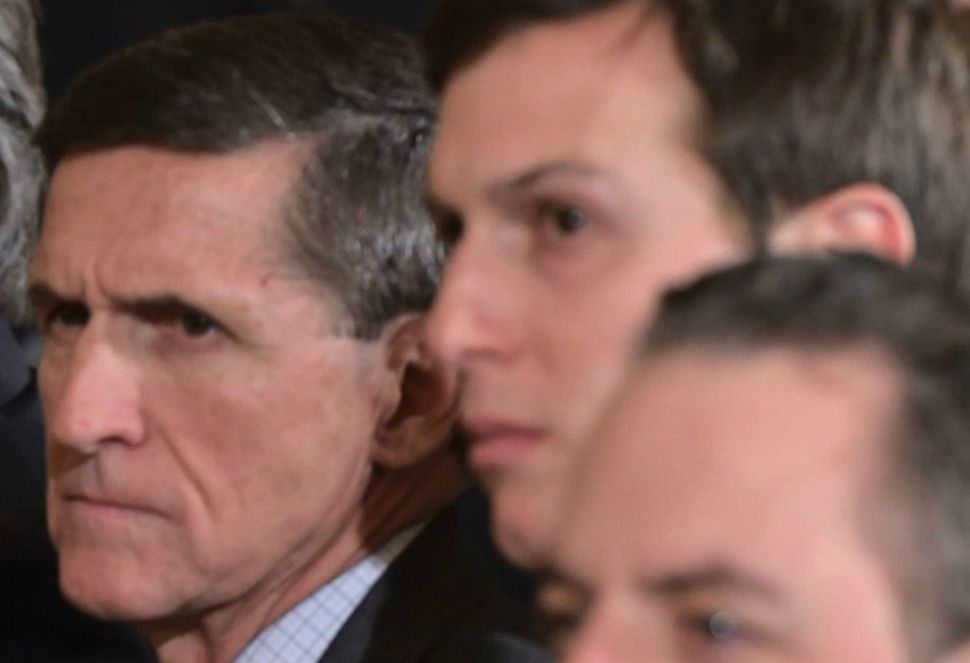 Because he’s playing three-dimensional chess, it’s easy to forget what special prosecutor Robert Mueller is really after. He’s investigating the suspicion that the Donald Trump for President campaign actively colluded with Russia in its effort to undermine the election. Everything else is secondary to that investigation. Anyone incidentally run over by that train is just collateral damage. Including, it seems, Israel — and perhaps the American Jewish community.

Sure, lying to the FBI, as two Trump associates so far have admitted doing, is a felony. So is collaboration with a foreign power by a private citizen to thwart a sitting president’s foreign policy, as former national security adviser Michael Flynn appears to have done. On the other hand, cooperating with an unfriendly power to sabotage America’s most basic democratic process, the presidential election, is an assault on the Constitution. That’s the big fish Mueller is after.

That’s why Flynn hasn’t been indicted for his admitted foreign intrigues. He pleaded guilty to lying about what he did — falsely denying, first, that he’d asked Russia to minimize its response to new U.S. sanctions, and second that he’d asked Russia and other foreign governments to delay or block an anti-Israel resolution at the United Nations Security Council. He admitted committing the underlying crimes when he admitted that it’s a lie to say he didn’t. But he wasn’t charged with those crimes.

No, those larger crimes are left hanging over Flynn’s head. That’s the prosecutor’s way of pressuring him to tell what he knows about those above him. Mueller has been working his way up the chain of command, from bit player George Papadopoulos to onetime campaign chairman Paul Manafort to top foreign policy aide Michael Flynn. Now he’s collecting evidence on the higher-ups. That’s three-dimensional chess.

Israel’s involvement dates back to December 2016, a year ago, when the Security Council was preparing to vote on a resolution sharply condemning Israel’s West Bank settlements. The Obama administration was known to be intent on abstaining, letting the resolution pass 14-0. Prime Minister Benjamin Netanyahu wanted urgently to block the vote, and according to news reports at the time he reached out to the Trump team after failing to persuade President Obama to veto. It’s now reported that Trump son-in-law and adviser Jared Kushner assigned Flynn to lobby council members on Netanyahu’s behalf.

Flynn’s confession and reported implication of Kushner is a sideshow, a stepping stone toward Mueller’s ultimate goal of uncovering Russia’s role in the presidential campaign. But it could damage the trust that undergirds U.S.-Israeli cooperation, by showing Israel’s willingness to undermine U.S. policy by violating American protocol — in this case the one-president-at-a-time rule.

It could be even more damaging to American Jews. The FBI and U.S. military intelligence have been hunting for decades for evidence of American Jews illegally helping Israel at Israel’s behest. Now they may think they’ve finally found one: Jared Kushner.

Flynn’s locution over the attempted U.N. intervention may or may not lead eventually to indictments. If there was a crime committed, it would probably be under the Logan Act, the 18th century law that forbids private citizens colluding with foreign powers to undermine U.S. foreign policy. Bringing charges would be a stretch. Logan historically has led to only two indictments, both more than a century old, and neither ended in a conviction. It’s as close as you can get to a dead letter in American law.

On the other hand, the FBI has never been shy about digging up strange legal doctrines to nail a suspect. Back in 2005 the bureau arrested two officials of AIPAC, the American Israel Public Affairs Committee, on charges of violating the Espionage Act of 1917 by illegally possessing classified material. The act had never before been used against private citizens receiving documents, and the Justice Department finally dropped the case after four years of legal torture for the accused

The FBI’s Israeli-spy hunt goes back to 1985, when U.S. naval intelligence analyst Jonathan Pollard was caught spying for Israel. The FBI never believed Pollard’s was an isolated case. In all these years, though, they’ve snared only one other culprit, a New Jersey octogenarian who’d been a bit player in the 1980s. Still, they’ve managed to upend a number of lives and careers on frivolous evidence, most famously CIA lawyer Adam Ciralsky and Army tank engineer David Tenenbaum, and baselessly denied security clearance to dozens of others.

What’s tragic about the U.N. resolution flap is that it’s so unnecessary. The resolution, Security Council Resolution 2334, broke no new ground and said nothing that the council hadn’t said many times before. If there was anything surprising about it, it was the fact that by abstaining, the Obama administration broke its own record as the only administration since 1967 that hadn’t permitted a single anti-Israel resolution from the Security Council.

The objections raised by Israel and its allies focused on two supposed offenses, First, it declared Israeli settlements in the West Bank to be illegal under international law by violating the Fourth Geneva Convention. That supposedly set a dangerous new precedent that made Israel vulnerable to sanctions, international court action and more. Israel has never agreed that the convention applies to the West Bank or Gaza. No other country in the world agrees with Israel’s reading.

Neither claim is remotely true. The facts: The Security Council has adopted, by my count, 29 resolutions since January 1981 (the start of the Reagan administration) that were blatantly one-sided in criticizing, deploring or condemning Israel and its actions. That’s 29 anti-Israel resolutions that the United States did not veto but rather allowed the council to approve, either by abstaining (16 times) or voting yes (13 times).

Of those, 13 explicitly stated that the Fourth Geneva Convention is applicable to Israel’s rule in the territories it captured in 1967, which makes civilian Israeli settlements illegal. The council had voted twice in 1979 to declare the settlements illegal explicitly. The 13 that followed reaffirmed the first two. Of those 13 resolutions reiterating the Geneva rules, the United States voted yes on six (two under Reagan, four under Bush Senior) and abstained seven times.

The bottom line is that the entire Flynn-Kushner gambit at the U.N. is a sideshow in the larger Trump-Mueller-Russia drama, but it could have longterm implications for the Jewish community. American Jews could well be the collateral damage.

For quick reference, here is a complete list of all 1,853 Security Council resolutions adopted since Reagan’s inauguration in January 1981, with links to the text of each one.