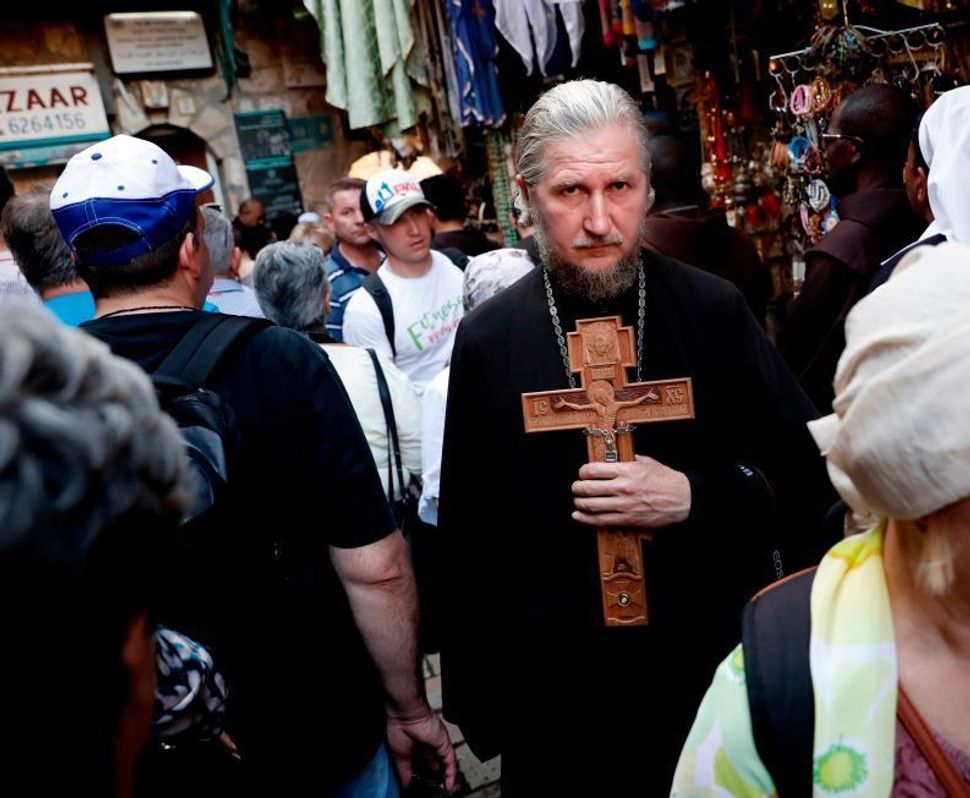 The MSNBC host Chris Matthews last week was not the only one to argue that President Trump’s decision to recognize Jerusalem as Israel’s capital was timed to sway the special election for U.S. Senate in Alabama tomorrow, where the turnout among white evangelical Christians may determine Roy Moore’s future.

Matthews, however, went a step further and said those evangelicals hold “crazy ideas” about Jerusalem.

Big mistake. Not only because such language serves no purpose other than to feed into the stereotype of a liberal media that continually insults a sizeable number of Americans.

But also because these beliefs aren’t crazy. They are deadly serious. And Americans, Jews especially, have to take them seriously. While some Christians have long adhered to “end-times” ideology, the difference today is that they have a friend in the White House willing to shape public policy to reflect these beliefs.

It’s impossible to imagine that President Trump actually shares this faith. He doesn’t have to. He can exploit it for political gain, as he has and likely will continue to do so. That’s why we can’t dismiss these ideas as beyond the mainstream. They’re in the Oval Office now.

Sixteen percent of Americans self-identify as white evangelical Protestants, according to the latest numbers from the Pew Research Center; that’s 52 million people, 81% of whom voted for Trump last year. Many of his staunchest supporters believe in the centrality of Jewish control over Jerusalem in a way that even many Jews do not.

“This runs deep. It is a core value,” Richard Land told me in an interview. “ I can’t imagine that Jewish people and Israelis can have a stronger ally than the evangelical Christians who believe as I do. Even if they attack us, we are going to turn the other cheek. There’s nothing we’re going to do that will stop us from being pro-Jewish and pro-Israeli.”

Land is the president of the Southern Evangelical Seminary in Charlotte, North Carolina, and formerly ran the public policy arm of the Southern Baptist Convention. I turned to him as someone recognized for being able to explain this ideology so that a Jew like me could understand.

“Evangelical Protestants, the majority of them, believe that God made certain promises to Israel and that those promises are still in force,” Land said. “That the Jews are still God’s chosen people. That he gave the land of Canaan to the Jews forever, in obedience and disobedience.”

Since Land and others like him believe that Jesus Christ will only return as the Messiah when Jews reside in Canaan and rule over Jerusalem, the establishment of the state of Israel in 1948 is considered a fulfillment of one aspect of biblical prophecy. Trump’s announcement is another one.

That’s because their faith is predicated on Jews playing a major role, though one that can make many of us uncomfortable, and even terrified, based on the following scenario.

Life on earth will get much worse before it gets better. Seven years before Jesus returns, Land says, all believing Christians will suddenly disappear. A charismatic figure known as the anti-Christ will preside over unprecedented war and conflict, and will build a representation of himself on or near the Temple Mount (which, of course, Muslims also revere.)

“At that time,” he continued, “there will be tens of thousands of evangelists who will be supernaturally converted and go around the world preaching the gospel. Millions of people will come to faith in Christ during this period. Many will be martyred by the anti-Christ.”

If you hear the gospel, and convert — you are good. If you once heard the gospel and rejected it — it’s over. This is why massive conversions will take place in Muslim countries where Christians were historically restricted from evangelizing, Land said.

Many Jews will convert, Land believes, but a remnant will remain. The anti-Christ will gather the armies of the world to fight those Jews, but Jesus Christ will return and save them, liberate the Temple, and usher in a millennial reign for a thousand years.

The Jews who have survived will accept Jesus. That part I somehow knew. But what I didn’t appreciate before talking to Land — and what clearly affects Trump’s worldview — is the place the Muslims hold in this ideology.

While Americans of many faiths subscribe to the idea that Jews, Muslims and Christians pray essentially to the same God, evangelical Christians like Land do not. “The God of Islam is not the father of our lord savior,” he told me. “It’s a different God entirely. I see no resemblance between the God of Islam and the God of Christianity and Judaism. I don’t recognize the God of the Quran.”

As a result, although Land says that he is commanded to love Muslims as he is commanded to love all people, “I am going to tell them the truth as I understand. I believe the God you worship is a false God and your religion will lead you to perdition. It would be polite to not say that. Politeness is not a function of love. Truthfulness is the language of love.”

So while Jews have a starring role to play in this biblical drama, Muslims decidedly do not. And this isn’t just about what’s going to happen in the Middle East today. Land believes that God will only bless America if America blesses the Jews. And America blesses the Jews by pursuing a foreign policy that ensures Jewish autonomy over all of ancient Israel, including Jerusalem. Including the Temple Mount.

“The Jews being back in the land and being in control of the land, is part of the fulfillment of biblical prophecy, “ Land insisted. “If we were, as a country, to thwart the Jewish people and their desires and their God-given right to occupy that land, then God would not bless us as a people.”

This explains how and why a segment of Americans of very deep faith can support not only Trump’s decision on Jerusalem, but also the many other ways he has singled out, demeaned and harmed Muslims. They are simply not blessed. We Jews are.

Although Pew reported last week that Trump’s approval rating among evangelicals is slipping, from 78% to 61%, the poll was taken before the Jerusalem announcement and it’s not known whether that will reverse the slide.

Whatever happens tomorrow in Alabama, American politics and policies will be shaped by these evangelical beliefs as long as the non-believer in the Oval Office sees an advantage in it. Theoretically, Jews should feel special. This Jew does not.