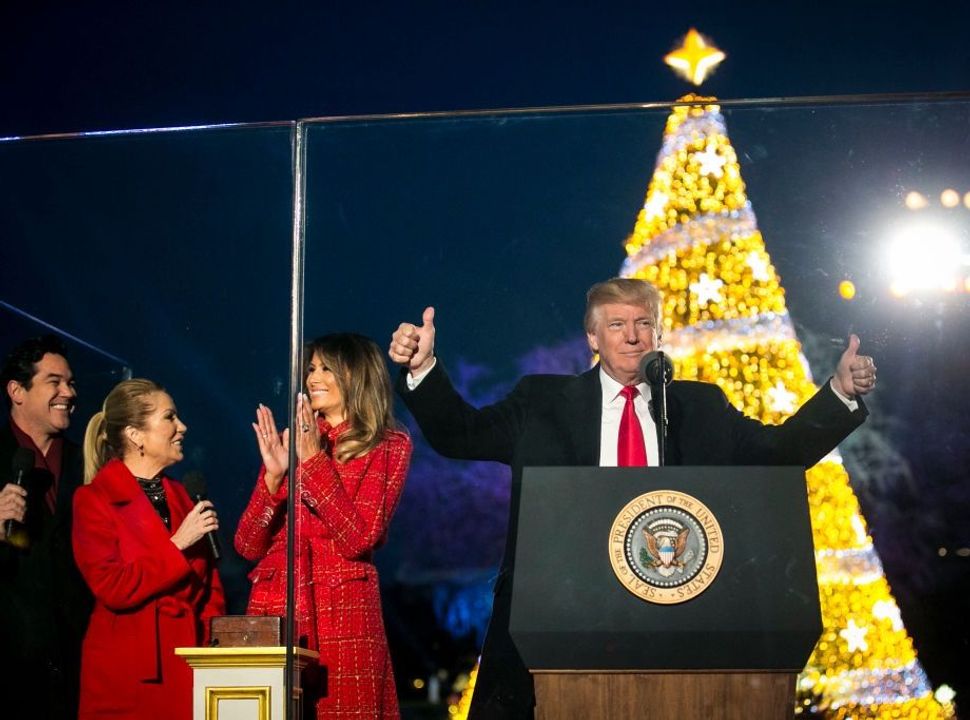 When Donald Trump swaggered to a Southern podium just before the recent Senate election in Alabama, trying to rally his base behind the right-wing zealot and accused pedophile Roy Moore, the stage was decorated with banners declaring “Merry Christmas.” People in the crowd held up green letters spelling out the salutation. A vast banner with the message hung above the main entry to the arena floor.

There was nothing at all ordinary or prosaic about this expression of yuletide cheer. Along with his allies on the Christian right and in Fox News, Trump has fabricated a supposed assault on Christmas — presumably by liberals, secularists, Jews, Muslims, the mainstream media and other enemies of the state — into a staple of white-nationalist mobilization.

“You go to stores, you don’t see the word Christmas,” Trump said last year, when he was still just the Republican candidate. “It says ‘happy holidays’ all over. I say, ‘Where’s Christmas?’ I tell my wife, ‘Don’t go to those stores.’ … I want to see Christmas.”

Having been elected, Trump rang the same notes in a speech two months ago to the Values Voter Summit in Washington, a program of the extremist Family Research Council. “We’re getting near that beautiful Christmas season that people don’t talk about anymore,” the president said. “They don’t use the word ‘Christmas’ because it’s not politically correct.”

In purveying this fallacy, Trump merely repurposed the disinformation first assembled by such Fox New propagandists as Bill O’Reilly, who broadcast a segment called “Christmas Under Siege” way back in 2004, and John Gibson, who followed the next year with his book “The War on Christmas: How the Liberal Plot To Ban the Sacred Christian Holiday Is Worse Than You Thought.”

Such pillars of the Christian right as the Rev. Jerry Falwell and the American Family Association picked up the cry. The release by Starbucks of a Christmas-season cup in 2015 that was simply colored red as an invitation for customers to draw on their own message was treated like a piece of convicting evidence in this particular auto-da-fe.

The temptation for the rest of us has been to roll our eyes and to laugh along with Jon Stewart’s satiric ripostes to O’Reilly. Any non-Christian who is subjected to the seasonal soundtrack of carols and the wall-to-wall showings of Christmas movies know that Christmas is pretty inescapable.

But it would be a dangerous mistake to misunderstand why Trump and his ilk invented this battle. It actually does reflect the reactionary anxiety of white evangelicals who see their share of the population and domination of the culture waning, as Robert Jones has pointed out in his seminal book “The End of White Christian America.”

To us, the purported enemy, substituting an ecumenical “Happy Holidays” or “Seasons Greetings” for an explicitly Christian “Merry Christmas” is a respectful and inclusive way of acknowledging that there are tens of millions of Jews, Muslims, Hindus, Sikhs, and non-believers in the country. Depending on the lunar calendar in any given year, many of them will be celebrating Hanukkah or Ramadan during Advent and Christmas itself. Kwanzaa, the celebration of black Americans’ African heritage, begins right after Christmas. We have no reason to privilege Christmas over these other holidays.

Personally, I have a soft spot for Christmas. I still remember my late mother rhapsodizing about going to Midnight Mass at St. Patrick’s Cathedral with her then-boyfriend, an Italian-American Catholic who had just come home from World War II. I have spent many Christmases in the homes of friends named Lyons, Mulligan, and McNamee, or attending worship services pastored by an African-American Baptist, the Rev. Dr. Johnny Ray Youngblood.

As a journalist who has extensively covered American religion, I’ve surely spent more time among evangelical Christians than the vast majority of Jews. While I completely opposed the evangelical positions on abortion rights and same-sex marriage, among other issues, I have seen, admired, and written about Christians ministering in a tender and committed way to everyone from oil-rig roughnecks to single mothers to recovering substance abusers.

Perhaps that’s why I’m so disgusted to see evangelical Christians waging war against Christmas. Fully 81% of evangelical voters supported Trump in the 2016 election, despite his well-documented history of immoral behavior. Roy Moore, a man credibly accused of molesting a 14-year-old girl and persistently seeking out teens when he was in his 30s, took 80% of the white evangelical vote in the Alabama race that he narrowly lost to Doug Jones. Even 76% of white evangelical women supported Moore.

Those numbers do not fully convey the blasphemy. Moore repeatedly depicted his campaign as a “spiritual war,” cloaking his sins in consecrated robes. When the accusations against Moore first appeared in a meticulously-sourced article in the Washington Post, Alabama’s state auditor pulled out the Christmas narrative to defend him. “Take Joseph and Mary. Mary was a teenager and Joseph was an adult carpenter. They became parents of Jesus,” Jim Zeigler told The Washington Examiner. “There’s just nothing immoral or illegal here. Maybe just a little bit unusual.”

As for Trump, with his track record of divorces, sexual harassment, bigotry, and lurid profanity, his amen corner of evangelical ministers have literally blessed him in the Oval Office. Evangelical theology has been twisted to portray Trump as the modern-day Cyrus, God’s chosen instrument for returning the faithful to their holy land.

To be truthful, those evangelical leaders and followers have, like Vladimir Putin, seen a very impressive return on investment. Not only did Trump appoint an anti-abortion justice to the Supreme Court in the person of Neil Gorsuch, but part of the president’s self-described “great Christmas gift” of a tax “reform” bill was to repeal the Johnson Amendment. That longstanding provision barred churches (and other houses of worship) from endorsing political candidates.

Only a technical ruling by the Senate parliamentarian kept this political payoff out of the final bill heading for a vote this week. But it is all but certain that Trump and his congressional enablers will attach the repeal to some other piece of legislation.

So when Christmas arrives this year, none of us need to think about it as a day of charity, miracles, joy, and the birthday of an incisive religious critic and visionary social reformer. No, the white evangelicals have corrected our foolish, naïve misapprehension. Christianity in America, at least their version of it, is about seizing and holding power. It’s about tossing moral values overboard in exchange for political advantage.

The real war is not the war on Christmas by us. It’s the war of Christmas – that is, the imposition of a mutant version of Christianity as a virtual state religion – on an ever more polyglot America. The mutual coexistence across lines of faith, or between believers and doubters, that ought to be understood as civility, a prime virtue for a democracy, instead gets routinely mocked as “political correctness.”

A year ago, we learned that Donald Trump and his intolerant bandwagon had ruined Thanksgiving. This year, they’ve added Christmas to the casualty list. Hey, maybe I shouldn’t mind. It wasn’t my holiday in the first place. And I’ll still go to Rev. Youngblood’s church on Christmas Eve and hear freedom songs and liberation theology. So I send my “Happy Holiday” card to white evangelicals: you’re the real losers and you did it to yourselves.

Samuel G. Freedman, a contributing editor to the Forward, is the author of eight books and a journalism professor at Columbia University.