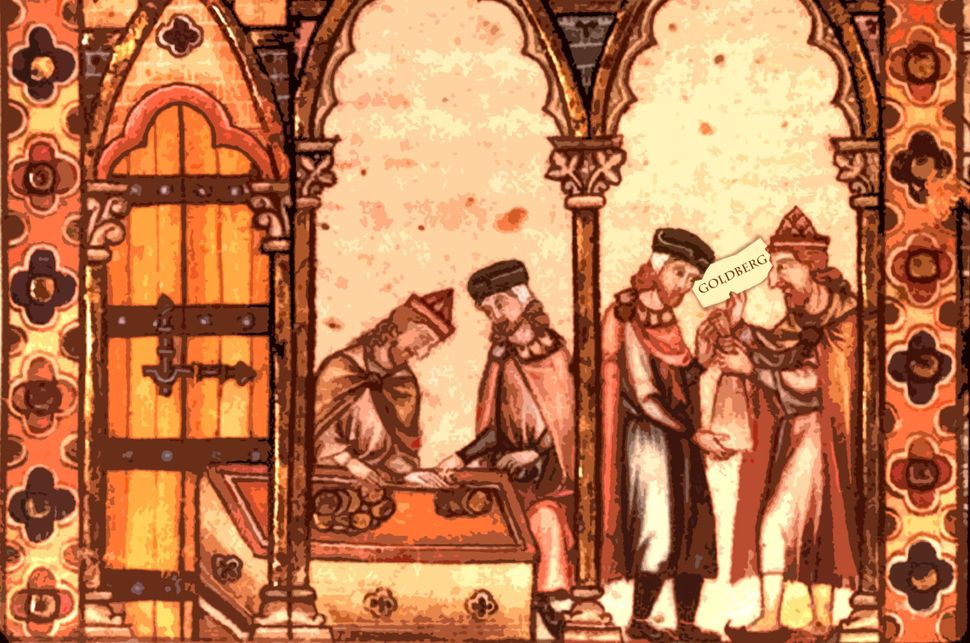 As with many aspects of Jewish culture, religion, genetics and heritage, the origins of Jewish last names are ensconced in more myth than fact.

There are many explanations out there attempting to explain the origins of Jewish surnames from Eastern Europe. Some see in them “Sephardic” roots, while others see a putative link to Antiquity when it comes to surnames based on Hebrew words.

Neither of these explanations has a basis in fact. Among Jews of Eastern Europe, families from Galicia were the first to be given last names en masse. In 1787, the Emperor Joseph II signed a law that forced all Jews from the Habsburg Empire to adopt fixed hereditary surnames.

Before that date, aside from very few exceptions, Jews had no surnames at all.

But even for those who recognize the advent of Jewish surnames for when it actually was, in the late 18th century, there is still a prevailing mythology surrounding how it came about.

It is widely believed that the Austrian Christian officials whose job was to assign these last names were all too human. As the story goes, these officials would take bribes for desirable last names, and when no bribe was forthcoming, they would assign a ridiculous last name as punishment.

As legend would have it, these officials created lists in which the price corresponded to the names. “Beautiful” sounding surnames, like words for precious stones or flowers (think Goldstein, which means “golden stone,” or Rosenthal, which means “rose valley,” or Silberberg, meaning “silver mountain”) were the most expensive. Last names including the names of ordinary metals (think of Eisenberg, meaning “iron mountain,” or Kupferstein, meaning “copper stone”) were cheaper. Names like Adler, meaning “eagle,” and Schwalbe, meaning “swallow,” were free of charge. Finally, anti-Semitic officials assigned “contemptuous” names simply to spite their future Jewish bearers. These nsmes might include Niemand (“nobody”), Affengesicht (“monkey face”), Mausfall (“mousetrap”) or – perhaps most insulting of all — Wanzreich (“rich in bedbugs” or “kingdom of bedbugs”).

It would stand to reason, taking into account the general poverty of the Galician Jews, that if you had to pay for a good last name, the good ones would be the least common, whereas the “contemptuous” ones would be the most common.

And yet there are not a large number of contemptuous anti-Semitic names in Galicia (fortunately, we don’t hesitate to add).

In my etymological dictionary of Galicia, there are about 37,000 surnames, and only a few dozen fall under the category of derogatory or ridiculous names. These include Deligtisch (“criminal”), Geschwür (“ulcer”), Katzenflügel (“cat’s wing), Krebsfuss (“crab’s paw”), Messerscharff (“as sharp as a knife”), Zeitlich (“temporary”), Sting (“stony”) and Zweighaft (“branched”), Falschberg (“false mountain”) and Sommerfeind (“enemy of summer”). Interestingly, numerous other “friends” also seem to result from mockery, although some of them form quite positive images: Bauerenfreund (“friend of peasants”), Weisenfreund (“friend of orphans”), Kinderfreund (“friend of children”), Judenfreund (“friend of Jews”), Bergenfreund (“friend of mountains”), and Rosenfreund (“friend of roses”).

And yet, overall, the overwhelming majority of surnames are formed either from completely neutral words or from poetic and romantic words.

The strong implication from this is that people weren’t paying top dollar for poetic last names, nor were they paying a lot to avoid being known as Shmuel Kingdom of Bedbugs.

I say this is the implication because figuring out whether Jews actually paid for their last names is impossible. It’s impossible because a list of the bribes an official took would be a document of illegality, directly related to extortion or bribes. Needless to say, such lists do not exist.

And yet, a statistical analysis of Jewish surnames proves that the price lists are no more than legend. Compound surnames based on two German roots (Gold-, Silber– “silver,” Eisen– “iron,” Rose-, Blum– “flower,” Wein– “wine,” “vine,” Weiss– ‘white’, Grün– ‘green’, Roth– ‘red’ etc. coupled with –stein ‘stone’, –berg “mountain,” –feld “field,” –thal “valley,” –baum “tree,” etc.) appear for the first time after the law of 1787 mentioned above. Dozens of communities of completely independent families adopted exactly the same surnames. They were invented by the Christian officials, who were most likely in Vienna and realized that combining two German roots can easily yield numerous surnames.

This feature was particularly helpful in a country in which hundreds of thousands of Jews needed to be assigned surnames for administrative purposes over a short period of time. The result was a lot of Jewish last names that sounded exactly like your typical German surnames. This was no accident, but rather in line with the spirit of the famous Edict of Tolerance signed by Joseph II in 1782, inspired by the ideas of the European Enlightenment. These Germanic last names reflected in part the desire to Germanize the Jewish population of the empire.

The myth of a list with a last name and a corresponding price could have taken place only in a situation where one particular clerk was in charge of the entire population. But it is impossible that different clerks could invent the same categories independently of each other. Moreover, it is certainly unlikely that an exchange of ideas between clerks took place concerning their illegal bribes.

Most important, the names with particularly pleasant meanings — the most “expensive” category, according to the legend — appear to be the most common names in various regions of Galicia. This clearly contradicts the legend: Jews rich enough to pay important bribes could not represent the largest group of Jewish population in the country.

But the legend of the last names and their prices can also be refuted by the attitudes of Jews from Eastern Europe toward their newly acquired surnames. Specifically, they ignored them, making the idea that they would pay for a good one illogical.

Outside the sphere of official documents, Jews continued to use their traditional names. Well into the 19th century, Jewish surnames on tombstones appeared only among families of the bourgeoisie in big cities. Provincial and Orthodox families did not inscribe their surnames on tombstones until the beginning of the 20th century; they used only their given names and patronymics (“Abraham ben Moses” or “Nathan ben Israel”).

Furthermore, in the Jewish literature of the second half of the 19th century, surnames are rare: characters are mainly called by given names, and sometimes by nicknames. Immigrants from Eastern Europe were forced to deal with their official surnames only when obtaining a foreign passport for emigration.

This kind of information also refutes the idea of the last name price list. The Galician Jews had absolutely no incentive to pay for their surnames. These new hereditary names introduced as a result of the Christian legislation remained totally outside the framework of the local Jewish tradition and were thus utterly marginal.

The inconsequential nature of Jews’ last names is cause to reconsider another fiction, too. One often hears that specifically Jewish associations are “hidden” in numerous Jewish surnames. For example, surnames starting with Korn, meaning “grain,” are seen as disguised forms of Cohen. Eckstein and Meersand are said not to merely mean “cornerstone” and “sea sand” in German, but refer instead to Psalms 118:22 and Genesis 32:13. One can also read claims that surnames starting in Gold-, Blum-, Rosen- and Perl- make reference to the corresponding Jewish female given names, while Teitelbaum, “date palm,” would be related to the biblical female name Tamar, meaning palm tree.

One cannot dismiss these claims on a formal basis. Yet the names in question are clearly polygenetic, meaning they are names that were given to numerous independent families. If the above interpretations can indeed be valid for one particular branch, it is totally implausible that they could be true for other, unrelated branches.

Furthermore, in a context in which surnames were totally marginal in the consciousness of Jews, it’s hardly plausible that their first bearers would make indirect Jewish associations when adopting their surnames. A large majority of such names were clearly invented and artificially assigned by Austrian clerks, almost on a random basis. In other parts of Eastern Europe, the patterns originally created in the Habsburg Empire were reused.

In regions where the surname starting with Korn- existed, one finds several other first parts related to flora and/or food: Weiz- meaning “wheat,” Mandel- for “almond,” Salz- for “salt,” and Zucker- for “sugar.” Teitelbaum is just one example among numerous family names derived from trees such as Apfelbaum, meaning “apple tree”; Birnbaum, meaning “pear tree,” and Tannenbaum/Tenenbaum, for “fir tree.”

Next to series of surnames starting in Gold-, we have a series in Silber-, with the same second half. Next to Rosen-, there are names starting in Wein- for “vine” or “wine.” Yet, female names Silber and Wein do not exist. As a result, generally speaking, in surnames, the first parts Gold- and Rosen- are also unrelated to female given names.

In fact, in this context, we find a not fortuitous coincidence: Yiddish female names and the first parts of artificial surnames invented by Austrian officials are associated with beauty. For given names of Jewish women, such meanings are typical from the Middle Ages (and are commonly found also in non-Ashkenazic communities of Spain, North Africa, Italy and the Ottoman Empire). For surnames that first appeared in countries where the administration was German speaking (such as Austrian and Prussian empires), these meanings are related directly to the general spirit of the period of Romanticism that inspired Christian clerks in charge of the creation of multiple surnames to be assigned to Jews.

In other words, rather than copying Yiddish women’s names, the clerks were under the thrall of a similar sentiment.

And with that, we hope to have dispelled the myth of last name lists for the foreseeable future.