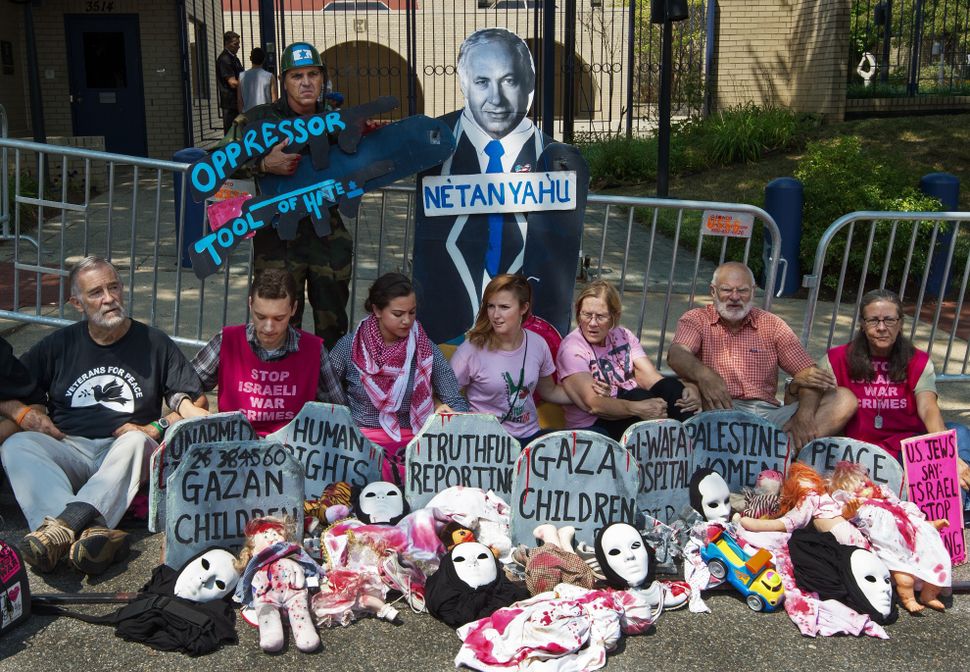 As a Jewish mother, one of the most important things to me is to instill in my children a sense of Jewish identity and values. For my now 15- and 16-year-old children, this has over the years included Tot-Shabbat at our synagogue, Hebrew school, Jewish summer camp and even Jewish youth group trips to Israel.

As a family, our history dates back to Rabbi Joseph Karo of 14th-century Palestine, writer of the Shulchan Aruch (the codification of Jewish religious law). In 2015 I took my children to visit Karo’s grave, in the holy Jewish city of Safed. It was the most prominent grave in the cemetery. My son, daughter and I placed stones at the gravesite of the ancient rabbi our family descends from and said a short prayer.

But our identity as a Jewish family manifests in another way, too: in the responsibility to think critically and act as effectively and morally as possible. This means a commitment to ending the human rights abuses Israel commits against Palestinians.

For this reason, I had decided that in between my son’s bar mitzvah and my daughter’s bat mitzvah, I would take them to see both the ancient sites of our Jewish faith and the current reality of the Israeli occupation of Palestine. From traveling to Safed and to a family reunion in Tel Aviv to touring the segregated city of Hebron and meeting with the Tamimi family in Nabi Saleh, it was one of the most important and educational things I have ever done to honor and continue my family’s Jewish identity.

But 2015 may have been be the last time I was able to visit those sites. On Saturday, the Israeli government released a blacklist of 20 organizations banned from entering Israel due to their support of the boycott, divestment and sanctions movement.

CODEPINK, the women-led grassroots anti-war organization, of which I am the co-director, was among those included.

Sadly, I am not surprised at Israel’s undemocratic, unprincipled and cowardly fiat. Indeed Israel’s entire existence is predicated on and constructed around such exclusion.

Since 1948, Palestinian refugees, whose descendants now number in the millions, have been refused the right to return to their homes and lands, which were seized from them during the establishment of Israel. Over the past seven decades, as Israel’s occupation of Palestinian lands has expanded, Israel has met criticism of its widely understood illegal actions by refusing entry to more and more activists and critics, to include Jews like myself.

Last summer, I spent six weeks in Palestine and Israel, staying mostly in the West Bank city of Hebron with the Palestinian human rights group Youth Against Settlements. Along with being attacked by a settler in Hebron, who hit me and screamed that I should “go to Auschwitz,” a campaign was launched against me by right-wing extremists.

Infuriated by my outspoken criticism of Israel and my association with Palestinians, they used my support for BDS to demand I be expelled from the country. Rather than ignoring or refusing their ridiculous charge that I was a bad Jew who shouldn’t be allowed in Israel, a public security official told the Israeli newspaper Yisrael Hayom that I would not be allowed to enter the country in the future.

The BDS movement that has so angered and frightened Israel and has now led to my banishment began in 2005 as a call from Palestinian civil society to employ the same methods that successfully ended South Africa’s apartheid in order to achieve a just peace in Palestine and Israel. The aims and tactics of the movement are simple and straightforward: Apply nonviolent economic pressure on Israel until Israel ends its occupation of all Palestinian lands conquered in 1967; grant equal rights to Palestinian citizens of Israel, and honor United Nations Resolution 194, which upholds the right of return for Palestinian refugees.

As the BDS movement has grown and seen major successes (prominent companies such as SodaStream and Ahava have moved their factories inside Israel’s 1948 boundaries, and global prison and security giant G4S has ended its Israeli contracts), Israel has become more and more afraid; it lashed out at those who are most effective in supporting the Palestinian struggle. In March 2017, the Knesset passed a law barring supporters of BDS from entering the country; and last month, the parliament approved $72 million to campaign against the BDS movement.

As BDS grows, builds and succeeds, Israel becomes more and more desperate to contain it. The latest effort is this blacklist.

But the repression Israel is meting out on the international stage is also happening on the ground in Palestine, but with more dire consequences for those under its grips. For more than the past 12 months, Israel has been pursuing 18 charges against the human rights defender Issa Amro for his human rights work. They have now arrested and are continuing to hold nonviolent activist Munther Amira from Bethlehem and are exacting a revenge of epic proportions against 16-year-old Ahed Tamimi and her mother for Ahed Tamimi’s slap of a soldier after her teenage cousin had been shot in the face with a rubber coated-steel bullet.

All these are Palestinian activists I have spent long periods of time with when I have visited Palestine. Now, international partners like myself will be barred from standing in solidarity on the ground, where it is most needed.

I feel a deep loss for my children and for myself that I am now banned from Israel, that I can no longer explore our history there and can no longer visit the people dear to me.

But the irony is also not lost on me that Zionism, which my great-grandparents supported in the United States in the early 1900s, and which resulted in the ethnic cleansing of Palestinians from their lands, is now being used as a litmus test to decide who are the “good Jews” who should be protected.

Ultimately, I have hope that this will further the cause of the struggle. By blacklisting organizations and banning even Jews and Quakers who take principled stances to support Palestinian human rights, Israel is isolating itself even further.

I hope this isolation will bring the worldwide struggle for Palestinian rights one step closer to victory. If nothing else, it will cement for my children that they, too, like me, must devote their lives to freedom and justice for Palestinians.