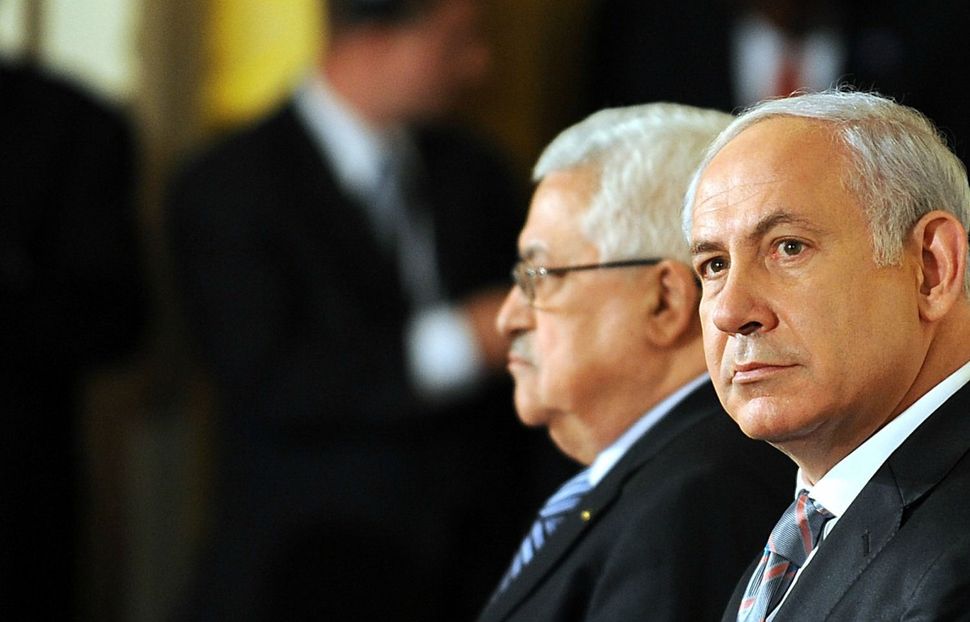 You’d think by now we’d be accustomed to the steady stream of lies and double-dealing that passes for diplomacy in the Middle East. Still, it’s hard to think of anything comparable to the weird convergence of hypocrisy, blindness and plain chutzpah that unfolded on three continents on a recent Thursday, January 25.

That was the day that Benjamin Netanyahu sat on stage in Davos for an interview with pundit Fareed Zakaria, aired on CNN the following Sunday, in which the Israeli leader explained the hurdles facing the Trump administration’s Middle East peace negotiators. Their challenge, Netanyahu said, is that the Israeli-Palestinian conflict is “fundamentally not a real estate deal but a problem of recognizing Israel’s existence, the problem of not recognizing a Jewish state in any boundary.”

Is that really the problem?

In New York on that same Thursday, the United Nations Security Council heard a rare, blistering attack on Palestinian leader Mahmoud Abbas by the American ambassador, Nikki Haley. She was lambasting Abbas for a January 14 speech that featured some ugly anti-Israel slurs — including, she said, a call “for suspending recognition of Israel.”

This presents a puzzle: If Netanyahu is right, and the Palestinians do indeed refuse to recognize Israel, then how could Abbas urge “suspending recognition of Israel”? If they’ve never given recognition, how can they take it back? Which is it?

Now, Abbas’s speech, a two-hour keynote address to the central council of the Palestine Liberation Organization, has drawn deserved condemnation worldwide for a 20-minute tirade in which he tied Israel to European colonialism, maligned Holocaust victims and laid out a twisted, conspiracy-laced history of Jewish statehood, somehow beginning with Oliver Cromwell. Protests have come from across the spectrum, from Likud to Labor, from the Zionist Organization of America to the Union for Reform Judaism. The American Jewish Committee, in a letter to European governments, called it “an assault on the very notion of peace, coexistence and basic human decency.”

But the question remains: Did he retract recognition of Israel? If so, when did the recognition happen?

It should be easy enough to look at the text of Abbas’s speech and see exactly what he had to say. When a speech is this hotly discussed, this controversial, the transcript usually appears all over the web. Not this time, though. As near as I can tell, the full text is available only in one place, here, on the website of the official Palestine news agency Wafa. In Arabic. There doesn’t seem to be a credible English (or Hebrew) translation available anywhere. Wafa offers a clickable link that brings a garbled, barely serviceable, computer-generated English translation. It’s a little easier to follow, I found, if you remember a bit of your college Arabic.

Be prepared for a shock, though. That paranoid anti-Israel tirade, with its twisted history of the Zionist idea, takes up about 20 minutes of a two-hour speech. Of the other hour-and-a-half, most consists of Abbas’s version of the rocky Israeli-Palestinian diplomatic history since the Oslo agreement in 1993. Here are a few key quotes: “We are committed to the two-state solution.” “We are committed to the Arab Peace Initiative.” “We are committed to negotiations as a way to reach a political settlement with the Israelis.”

And this: “We demand peace with the state of Israel. If Palestine and Israel are established, we will live together and talk to each other.”

Incidentally, reading the Arabic transcript shows that the most widely criticized quote in Abbas’s speech, the one repeatedly labeled anti-Semitic, is actually a mistranslation. He’s been quoted as saying: “Israel was created as a colonialist project that has nothing to do with Judaism.” What he actually said was: “Israel was used by colonialism for its (European colonialism’s) own purposes, and colonialist scheming has nothing to do with Judaism.” The actual statement is obnoxious enough, but it’s not anti-Semitic. Mistranslation makes obnoxious look hateful.

Overall, friends of Israel won’t find the speech pleasant reading. Abbas recalls the PLO’s 1988 vote to accept the U.N. partition plan of 1947, effectively accepting Israel’s existence, but he doesn’t explain what took them so long. He blames Israel for the failures of peace talks. He somehow forgets to mention airplane hijackings, bus bombings and the carnage of the Second Intifada.

It’s clear that he doesn’t like Israel. Most Palestinians never wanted to see the country they thought was theirs turned into a different country. They eventually recognized Israel once they learned they can’t do anything about it and decided to settle for what they could get. What’s important is that they have come around. They decided to recognize Israel and embrace two states, on the understanding that Israel would reciprocate. But that hasn’t happened. Netanyahu endorsed two states, but his government hasn’t, and his Likud Party is actually opposed.

Netanyahu and his defenders say a grudging, resentful recognition can’t be trusted. That’s important to remember. Whatever you may think of Netanyahu’s diplomatic approach — his mistrust of Palestinian intentions, his defense of settlements, his rejection of the pre-1967 borders — the fact is that Israeli voters endorsed his views by electing him. They don’t trust Palestinian statehood. Or so his defenders argue.

That brings us back to our starting point, Thursday, January 25. As Netanyahu was explaining in Davos and Haley was thundering in New York, prominent opinion researchers in Tel Aviv and Ramallah were releasing a joint survey, the latest in a twice-yearly project, looking at Israeli and Palestinian views of each other and the conflict.

The survey (here) found that both Palestinians and Israeli Jews narrowly reject a two-state solution for ending the conflict — until they’re read the likely details of a theoretical agreement as broadly discussed in previous negotiations. A demilitarized Palestinian state along the pre-1967 lines with land swaps; both capitals in Jerusalem; formal declarations that the conflict is over; peace with the other 22 Arab states; compensation for the Palestinian refugees, but no “return” to Israel. Then support jumps to 60% on both sides, or roughly two-to-one (with 34% of Palestinians and 30% of Israeli Jews still opposed).

In other words, both Israelis and Palestinians overwhelmingly support a two-state solution when they understand what it would entail. So what did the headlines in the press say? Naturally, some variation on the Jerusalem Post’s “Poll: Under 50% of Palestinians, Israeli Jews support two-state solution.”
That was the first sentence in the press release from the sponsors, the Tami Steinmetz Center at Tel Aviv University and the Palestinian Center for Policy and Survey Research. Unfortunately, reporters don’t usually read past the first sentence, and professors don’t know enough to put the important stuff first.

By that same two-to-one margin, each side believes the other side doesn’t want peace. No surprise, then, that overwhelming majorities on both sides — 89% of Palestinians, 75% of Israelis — say the other side can’t be trusted.

One Thursday on three continents, Israelis and their friends and partners taking information showing that a peace agreement is possible and wanted, and using it to claim it’s unwanted and impossible. All of which leaves us with one more question: Why is it that when Arab leaders say they want to destroy us, we insist they mean every word, but when they say they’re ready to lay down their weapons we insist they’re lying?

But we know the answer to that one, too: It’s the old Jewish telegram. Start worrying, details to follow.