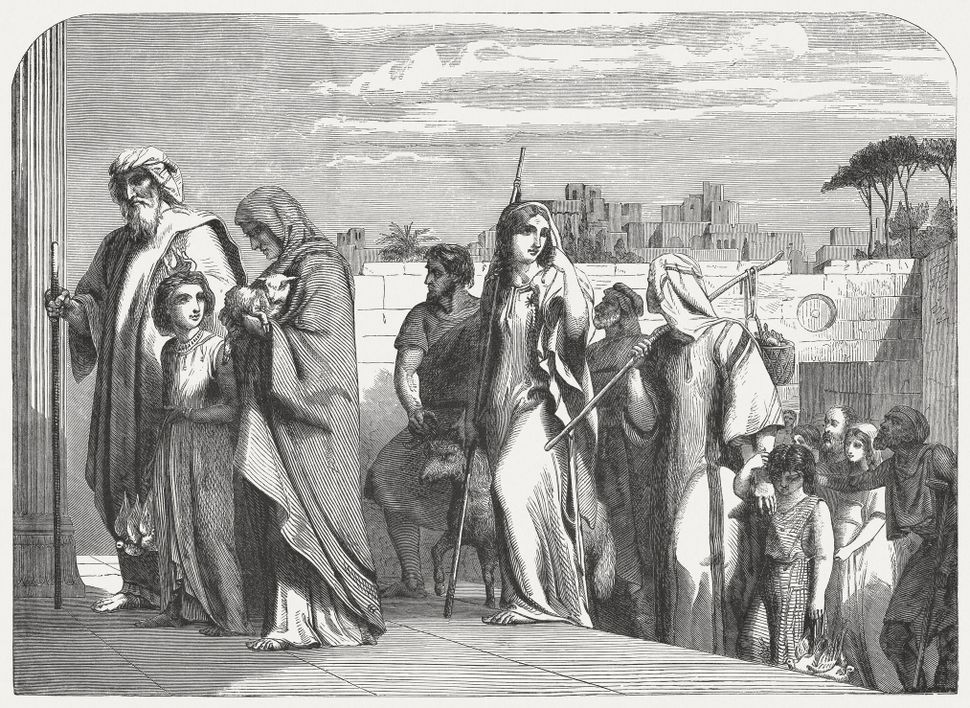 There’s a strange phenomenon that pops up surrounding the last names of Jews in the Russian Empire during the 19th century. A lot of them were derived from women’s first names, which is known as “matronymics.” The existence of last names like Belkin, Dvorkin, Malkin, and Rivkin, derived from Belka (Beyle), Dvorka (Deborah), Malka, and Rivka, were extremely common and represent a real idiosyncrasy of Ashkenazic onomastics (the study of names).

The cause of this mystery may well have to do with a peculiarity of Ashkenazi culture at the time, namely, the fact that it was Jewish women who were outwardly facing in areas like commerce and the marketplace, while their menfolk studied in Yeshiva.

But to truly get at the heart of this mystery, a few misconceptions surrounding the study of Jewish surnames from Eastern Europe must be dispelled. Earlier we dealt with the legend about Jews paying for nice-sounding last names, and the (wrong) analysis that posits that Jewish last names based in Hebrew are older than surnames having Germanic or Slavic roots.

But there are other common misconceptions. Among the surnames commonly used by Jews from Eastern Europe, some are clearly derived from towns or cities in western Germany, like Auerbach, Epstein, Ginzburg, Halpern, Landau, and Schapiro. And some authors consider the high frequency of these surnames to corroborate the existence of mass medieval migrations of Jews from Germany to Eastern Europe.

But this argument is wrong. In Eastern Europe, Jews acquired their last names between the end of the 18th century and the middle of the 19th century, following a series of laws forcing them to adopt hereditary names. It was only after these laws were ratified that 99% of Jews in these territories received surnames. Before that period, the only Jews with last names like Epstein and Ginszburg were those of certain rabbinical dynasties.

These names were particularly prestigious and sometimes inherited from mothers. The progenitors of these rabbinical families lived in western Germany during the 15th and 16th centuries before they or their descendants migrated eastward. At the moment of the mass surnaming, the number of bearers of these surnames was already significant: these bearers retained their prestigious names, while other families (without surnames until the end of the 18th century) were taking new last names. The high frequency of Epstein to take just one example results from its old age; the earliest reference, from Frankfurt, dates from 1392, and the migration of a rabbi bearing this name to Eastern Europe. It is testimony to the prestige of his lineage rather than a large number of migrants from the town of Eppstein.

The same explanation holds true for all surnames of Ashkenazic rabbinical dynasties. One of them, pronounced Margolis by the Litvakim and Margulis by Jews from Poland and Ukraine, is derived from a female given name, that of the mother of its first known bearer, Rabbi Jacob who lived in Nuremberg at the end of the 15th century.

And the frequency of the use of this surname is not due to the popularity of the first name Margalis, which was always rather unusual, but to just one woman named Margalis, whose descendants were famous religious scholars throughout the past 500 years.

So where did the prevalence of Belkin, Dvorkin, Malkin, and Rivkin come from?

Several theories have been suggested to explain this phenomenon. Some believe it has to do with the importance attached to the mother in Judaism, indexed by the fact that one’s Jewishness is transmitted through the maternal line.

But this explanation is naïve. Matrilineal descent holds for all Jews in the world. Yet the large category of surnames in question is limited to the Russian Empire.

The influence of the tradition of Jewish nicknames given to men after women’s first names is a more plausible explanation. This tradition was well established in Eastern Europe already before the 19th century. Consider the last names of the famous Polish rabbis Samuel Eidels (1555-1631) and Joel Sirkes (1561-1640), both ending in the Yiddish possessive suffix -s. In the lists of signatories of rabbinical decisions from the Polish-Lithuanian Commonwealth we also find rabbis called Hendels and Temerles. Numerous names of the community leaders in Lwów (now L’viv) found in Polish documents from the 1740s–1770s also belong to the same category: Bonis, Cymeles, Daches, Fayglis, Menkes, Minceles, Mizes, and Nechles.

This naming tradition could have had direct influence on the names adopted at the turn of the 18th-19th centuries in the same general area. For example, in both Galicia and Russian Poland, matronymics cover one to three percent of all last names. In certain districts of the provinces of Podolia and Volhynia (now in Ukraine), the part of matronymics (like Fradis, Pesis, Rekhlis, Ronis, Ryvkis, Suris, Taubis, Yakhnis) reached eight percent.

The tradition of nicknames based on female names was surely influenced by the economic and social structure of the East European Jewish community. For the rabbi Samuel Eidels mentioned above, his nickname was taken after the given name of his mother-in-law Eidel Lifschitz who during twenty years assumed all the expenses of the yeshiva he led.

Furthermore, Jewish women occupied important commercial roles. Many Jewish men were craftsmen who worked at home, but the women often could be found trading in little shops or in the market place. Certain women were better known to the inhabitants of a locality than were their husbands.

Of course, some men less well known than their working wives since, for some husbands, religious study was their only occupation.

It is no surprise, then, that nicknames often were created from the names of one’s mother or wife. Numerous such examples appear in the writings of the Yiddish authors such as Shalom Aleichem.

The fact that for Jews in Eastern Europe the need for surnames was an artificial requirement imposed by the Czarist government was of crucial importance for the inception of matronymic surnames. The naming process was administered by the Jewish administration, know as the Kahal, and as such, was greatly affected by the imagination of the Kahal authorities. We know that matronymic surnames were quite common in the Mogilev province in East Belorussia, where they covered 30-40 percent of the total Jewish population. Almost all of them were created by using the East Slavic possessive suffix -in (all examples listed above at the beginning of the discussion of matronymics are from that area). It seems unlikely that in this region, women had the most honored position or were the most active in commerce. It is more reasonable to assume that such a pattern was decided upon, almost on a random basis, by local Kahal authorities, while in other areas Jewish officials chose different patterns.

For example, in the Novogrudok district of the Minsk province, one third of Jews received names derived from the male given names and for another third surnames were drawn from local place names by adding the suffix -sky. In a number of districts of Volhynia and Podolia, artificial surnames with pleasant meanings like Goldberg ‘gold mountain’, Rosenthal ‘valley of roses’, and Silberstein ‘silver stone’ covered about one third of all names, while one quarter of names indicated the occupations of their first bearers. In the area southeast to Kiev, two thirds of Jews received names ending in -sky based on local towns.

An interesting idea concerning the genesis of matronymics was suggested by Michael Falk in his paper published in 2001. Firstly, the author performed a statistical analysis to show without any ambiguity that Ashkenazic names derived from the female given names occur more frequently in the territories under the Russian administration rather than other administrations. Secondly, he paid attention to the fact that the standard Russian naming pattern has three parts: (1) the given name of the person, (2) his/her patronymic (father’s given name to which for a man the suffix ovich or ov is added), (3) the surname. If the newly adopted surname was mainly a patronymic drawn from the father’s given name, the second and the third elements would be tautological. For example, Ber, the son of Abram and Rivka, would be called Ber Abramov(ich) Abramov(ich). The construction of the surname from the given name of the mother would in the same example yield Ber Abramov(ich) Rivkin.

Falk also noted that his theory explains the fact that the most popular suffix used in Russian Jewish matronymics is -in, of East Slavic and not Yiddish origin.

Falk’s theory is particularly compelling for East Belorussia. This area became part of the Russian Empire after the First Partition of Poland (1772), some twenty years before other provinces that formed the Pale of Settlement (1793, 1795).

Consequently, an additional generation of Jews from East Belorussia was already exposed to the Russian cultural traditions before the law about the surnames was promulgated. This consideration is well correlated with the fact that East Belorussia represents the area where matronymics ending in -in were especially common.

Still, I do not consider this to be the explanation of the frequent use of matronymics in the Russian Empire, but rather a single, if important, factor. Indeed, it does not explain numerous surnames ending in the Yiddish suffix -s created in southern Ukraine and Bessarabia. Also, despite some redundancy according to the Russian three-part naming patterns mentioned by Falk, numerous surnames drawn from male given names were created in various provinces. Actually, in all regions except for Mogilev province, they were even more popular than matronymics. This is also true for Vitebsk province annexed by Russia at the same time as that of Mogilev. And even in Mogilev province, there certainly were patterns other than matronymics that were available for the members of the Kahal administration for the creation of surnames: place names, occupations, physical features, and various artificial constructions.

The fact that they chose matronymics ending in -in is partly explained by Falk’s argument, though globally speaking, it was probably simply fortuitous. Falk is certainly right when he considers not fortuitous the fact that the widespread use of matronymics was typical for the territories under the Russian administration only. This correlation, however, is not necessarily related to the three-part Russian naming pattern contrasting to the two-part (given name + surname) pattern proper to other countries.

There is at least one more important factor that makes Russia different from other areas: It was only in Russia that the massive adoption of last names took place in the Jewish community while the matronymic tradition was already established. In other provinces, Christian state clerks were directly involved in assigning surnames, while the creation of surnames from female given names was almost unknown in various European Christian cultures.