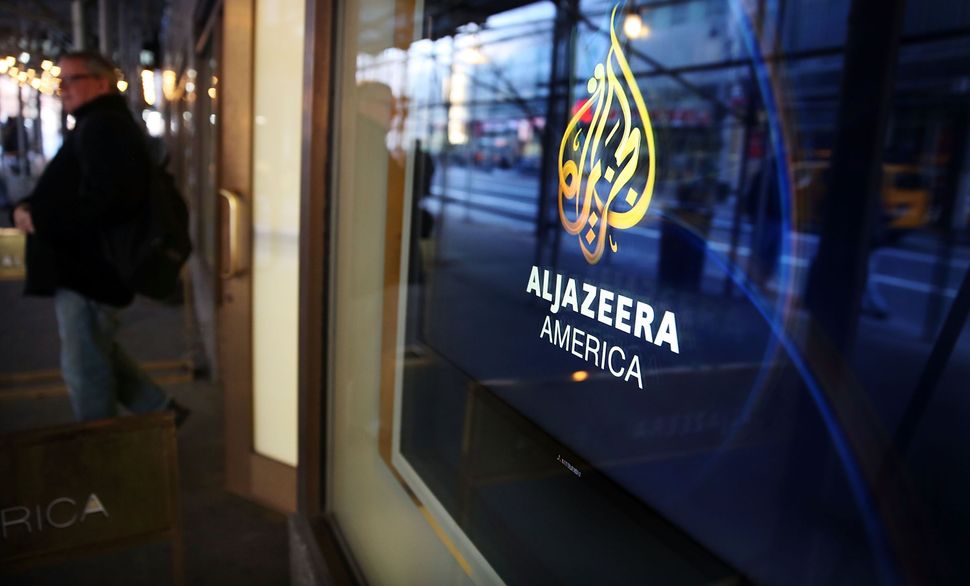 Some surprising news emerged on the heels of the annual shebang of America’s largest Israel lobbying group. On the final day of the American Israel Public Affairs Committee’s policy conference, news broke that an undercover Al Jazeera documentary — about the very topic of Jewish advocacy for Israel — might lead to espionage charges against the network.

As part of the documentary, a young man went undercover to work for pro-Israel lobbying and fundraising groups. American critics have argued that this constituted “espionage” against US citizens, since Al Jazeera is funded by the government of Qatar. Al Jazeera should therefore be forced to register under the Foreign Agents Registration Act, or FARA.

A FARA designation would for all practical purposes cripple Al Jazeera and its ability to interview US officials and bring guests on air. But this week, the efforts got traction on Capitol Hill when U.S. Representatives Josh Gottheimer and Lee Zeldin sent a letter urging Attorney General Jeff Sessions to enforce the FARA. 19 members of Congress have signed onto the latter, as has a single senator — Ted Cruz.

This strange episode makes more sense if you take a closer look at who’s running the charges. The largest contributor to Gottheimer 2018 election campaign is NorPac, a “non-partisan” political action committee whose “primary purpose” is to support candidates who demonstrate “a genuine commitment to the strength, security and survival of Israel,” according to Open Secrets. Given that New Jersey has the second largest Jewish population after New York in the U.S., a re-election campaign focused on Al Jazeera and its coverage of American Jews would be a good play to Gottheimer’s base.

But Al Jazeera is facing intense international pressure, too. The FARA letter comes during a nasty feud between Qatar and the United Arab Emirates, which has resulted in a crushing blockade against Qatar. And in some ways, this Gulf crisis also comes back to Al Jazeera.

The blockade is the result of the Anti Terror Quartet, which consists of Bahrain, the United Arab Emirates, Saudi Arabia and Egypt. They have long-standing grievances with Qatar’s independent foreign policy and especially with Al Jazeera, which has since its inception in 1996 prodded fellow Arab governments about sensitive issues, including the role of political Islam, corruption, Arab states’ support for the US/UK-led invasion and occupation of Iraq, and the lack of democracy across the Arab world.

Of course, while generally progressive on Arab issues, when it comes to the coverage of the Qatari royal family and of Qatari politics, Al Jazeera’s coverage is muted, at best (which falls in line with the rest of the GCC state media, which prohibits criticizing royal families and government policies in general). It’s also true that Al Jazeera is fully state owned, which explains why Qatar’s neighbors have long considered it to be a tool of Doha’s foreign policy.

And yet, the Arab world’s hatred of Al Jazeera is in direct proportion to its influence shaping the discourse, which runs deep, including on Israel. Al Jazeera Arabic remains the Arab world’s most popular news channel, and is the only Arab network to regularly provide Israelis with a platform to present their views.

That Al Jazeera continues to push boundaries was evident after it came under intense scrutiny on social media last month for providing IDF Spokesman in Arabic Avichay Adraee a platform to present the Israeli position. Still, Al Jazeera, along with Saudi Arabia’s Al Arabiya and Sky News Arabia networks, is well-known for presenting the Palestinian narrative of the Israeli/Palestinian conflict. AJ+, an online news and current events channel run by Al Jazeera, is known for producing content sympathetic to the Boycott, Divestment and Sanctions agenda, along with other subjects popular with America’s far-left constituency.

Due to its influence, a core demand by those imposing the siege was that Qatar shut down Al Jazeera if they want the siege to end (Qatar, for its part, considers the 13 demands not a negotiation gambit but an imposition meant to curtail its sovereignty).

In other words, Qatar is now being pressured to shut Al Jazeera by Bahrain, the United Arab Emirates, Saudi Arabia, Egypt, 19 congressmen, and Ted Cruz.

But this confluence of national and international pressure around Al Jazeera is not accidental. Qatar has long feared that its regional rivals would partner with American Jewish groups to jointly lobby the U.S. Congress to force the network to register under FARA.

It’s widely understood within Washington policy circles that the UAE sought to take advantage of the Trump presidency to solve the Qatar issue once and for all. It’s not just the Trump administration, either. Leaders of the American Jewish community have been courted by both Qatar and the UAE, and Jewish lobbyists have even been hired for their long-standing ties to the Jewish community.

Ultimately, it’s unclear whether the House Republican leadership would even consider bringing the FARA measure up for a vote. But no matter what American Jews think about Al Jazeera, they should recognize the true context of the FARA request: that media and intellectual diversity face unprecedented scrutiny at home and abroad, especially within the Arab world. Instead of using their lobbying influence to become partisans in the ATQ-Qatar dispute by calling for Al Jazeera’s FARA registration, American Jewish leaders should continue their respective engagements with the Qatari and UAE leadership.

If the Doha-based network is forced to register as a Foreign Agent, it will likely have ripple effects against media organizations around the world. The American Jewish leadership should not want this stain on its reputation, especially given that they are known for championing tolerance and pluralism at home and abroad.

Sigurd Neubauer is a Middle East analyst based in Washington and a frequent contributor to Al Jazeera. He is also a graduate of Yeshiva University in New York where he studied Political Science (BA) and Modern Jewish history.