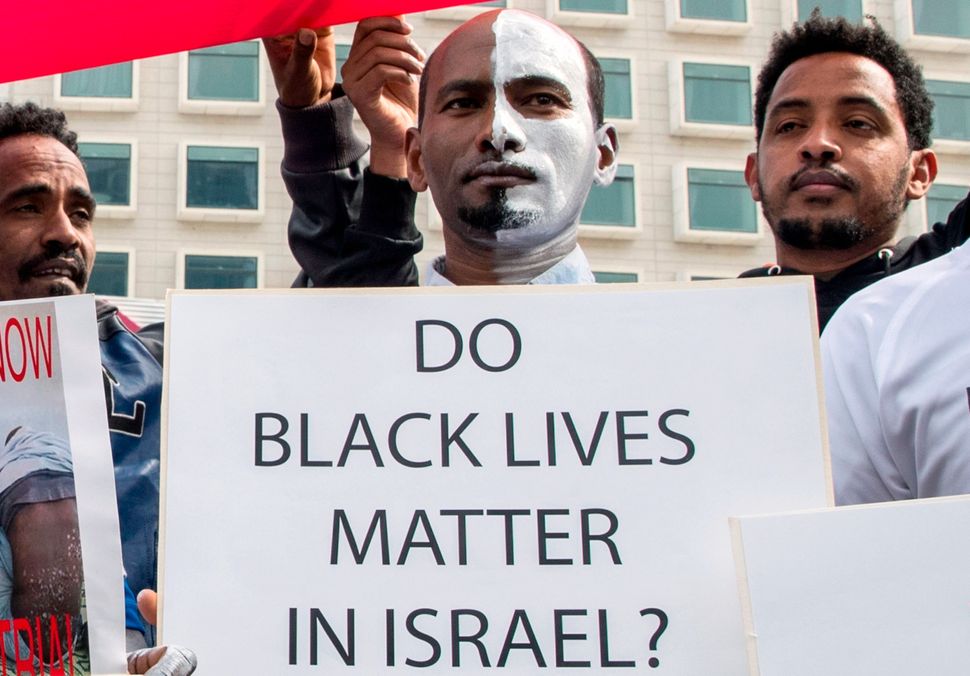 Never has an outcry from one Jew to another felt so futile.

Ever since the Israeli government announced its intention to deport to Africa thousands of asylum refugees who fled horrific conditions in Eritrea and Sudan, a chorus of mournful opposition has grown and grown.

Inside Israel, left-wing activists, members of kibbutzim, Holocaust survivors, religious leaders, El Al pilots and others have joined the asylum seekers themselves in their brave attempt to persuade Prime Minister Benjamin Netanyahu’s government to undo this cruel and unnecessary policy.

But their insistent voices are not enough. Nor is it enough that Diaspora Jews are literally begging Israel to halt this program. Those voices are not just from the predictable left, likely to complain about anything Netanyahu does. No, they include mainstream, establishment figures. Even the Jewish Agency for Israel, as establishment an organization as there is, called upon the government to at least accept 500 young African migrants who arrived in Israel as unaccompanied minors.

“These youngsters have grown up in an Israeli educational environment, speak fluent Hebrew, are imbued with Israeli culture, and are loyal to the state of Israel,” the Jewish agency board said. “Therefore, it is right that they be granted legal status.”

But those 500 are but a small representation of the thousands who were notified beginning January 1 that they must return to their own countries or to a third nation, or be sent to jail until they are deported. If they leave by March 31, they will get free airfare and $3,500. If not, the deportations could start the next day.

Is this the price of Jewish sovereignty? How can it be? About 40,000 Eritreans and Sudanese are living in Israel, a number that has stayed constant since the government built a fortified fence along the Egyptian order; last year, not a single refugee crossed into the country. They do not pose a national security threat. They are not numerous enough to alter the basic complexion of Israeli society. Israel’s booming economy — how often does Netanyahu remind us of it? — should be able to absorb them, especially since they often do jobs that many Israelis won’t do.

What to me is so depressing about this story is that there is little political pressure within Israel to stop the deportations. The Israel Democracy Institute in February reported that 66% percent of Jewish Israelis and about one half of the Arab public favor the deportations. Among Jews, the split is sharply ideological: 78% of the right supports the government, while only 35% of the center and 25% of the left do.

With the nationalistic right ascendant, Netanyahu can ignore the pleas from the Diaspora with impunity. Domestic political impunity, that is. The morality of this action, should it take place — should these desperate people be sent back to countries where they will be demonstrably unsafe — will stain the Israeli government for years to come.

As the 70th anniversary of Israel’s independence draws closer, you will hear a lot about how American Jews, especially younger ones, are growing increasingly alienated from Israel. In fact, a much older and more powerful Jew, Ronald Lauder, head of the World Jewish Congress, bemoaned this development in today’s New York Times. Lauder points to the abandonment of the two-state solution and the dictatorial powers of the ultra-Orthodox rabbinate as the reason.

I would add a third: The heartbreaking decision to throw out defenseless black people who only sought refuge the way our forefathers and foremothers once did.

The deportations are scheduled to begin April 1, the second day of Passover, the moment when the Israelites metaphorically left Egypt and embarked on a journey towards eventual sovereignty in the promised land. Are we worthy of that modern day sovereignty today?

What else I’ve been reading. The story that drew the most visitors to our website last week was this provocative column by Sigurd Neubauer, a Middle East analyst and columnist, positing that President Trump fired Rex Tillerson to protect Jared Kushner. Remember that? So manic is this presidency that the firing of the Secretary of State just a few days ago has been upstaged by even more White House tumult.

For Jewish organizational junkies, and anyone else interested in how we as a community govern ourselves, don’t miss our Josh Nathan-Kazis’ continuing coverage of Malcolm Hoenlein, the powerful (and well-paid) long time head of the Presidents Conference of Major American Jewish Organizations. Turns out that Hoenlein is on the board of an Israeli gas firm, something he neglected to inform anyone on his board besides the chairman. Read more here.

And if you loved “Hamilton” and “Dear Evan Hanson” and want to hear Lin-Manuel Miranda and Ben Platt melt your heart, listen to this video the two musical stars produced for Saturday’s March for our Lives. Yeah.

The very Forward guide to synagogues. We are thrilled so far with the response to our exciting new project: the Forward’s first ever, grassroots, crowd-sourced, nondenominational guide to American synagogues, temples and minyanim. With your help, we are creating a searchable data base which will be updated periodically to provide all sorts of useful information about the ways American Jews come together to worship, study, socialize and care for each other.

Just click on [this survey](https://docs.google.com/forms/d/e/1FAIpQLSdcucO6rWEL7GCWjZV1DUQ-keuRDjjpn_ffU-gzX0dBUuPj8w/viewform — it won’t take long to complete — and spread the word!

Looking forward. Many thanks to all the readers who contacted me after I wrote about how I recently learned that I have a rare genetic blood disorder, Factor XI deficiency, that is common among Ashkenazi Jews. I was touched by your concern, and by the stories of other afflicted families. All the more reason to be grateful for what modern medicine can teach us.

Please do stay in touch by emailing me at JaneEisnerEIC@forward.com.