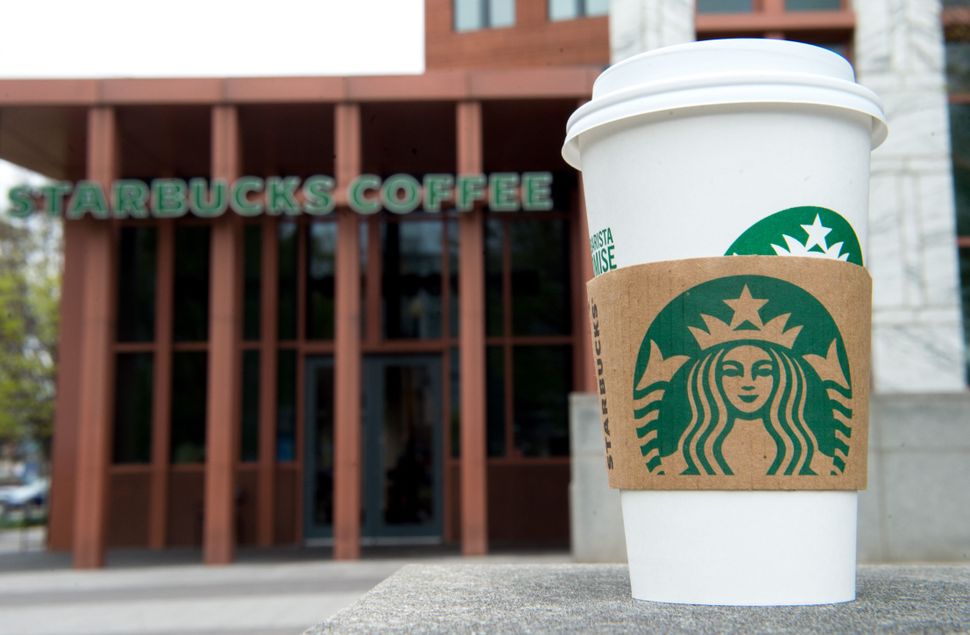 Last month, two black men waiting in a Starbucks in Philadelphia were arrested for the new crime of Waiting While Black. Shortly thereafter, Starbucks announced that it would undertake anti-bias training to ensure this did not happen again — which was good. The plan is to close all 8,000+ of their locations on May 29th for a full day.

The training included partnerships with the NAACP Legal Defense and Education Fund, the Equal Justice Initiative and Demos, a public policy organization. And it also included one Jewish organization: the Anti-Defamation League.

And yet these plans were reversed this week, when it was announced that the ADL would no longer be leading Starbucks’ training. Some have criticized the move as a new form of bigotry. And yet, this is a good thing.

For on too many issues, the ADL has sided with law enforcement against communities of color.

I’m not the only one who thinks so. After the announcement that the ADL was joining the training, controversial Women’s march leader Tamika Mallory let her feelings be known that the ADL was not fit to lead such an endeavor.

#Starbucks is NOT serious about doing right by BLACK people! #boycottstarbucks pic.twitter.com/cjpDAXesCC

But far from an objective observer, Mallory was just coming off of her own controversy. The activist gained unwanted attention when her association with known anti-semite Nation of Islam leader Louis Farrakhan came to light. She raised eyebrows when she failed to adequately distance herself from Farrakhan, who has a long, unbroken history of making flagrant anti-Semitic statements.

In light of that controversy, Mallory’s forceful condemnation of a Jewish anti-bias organization raised some eyebrows.

But she was far from the only person to feel the ADL’s inclusion in the leadership was inappropriate. Mallory’s hypocrisy aside, she was not wrong. The ADL is the wrong organization to take a leadership role in this particular, thanks to their long history of shortcomings on progressive politics that should have been disqualifying from the get go.

Because here’s the thing: the story that played out in that Philadelphia Starbucks was not just a story of interpersonal prejudices between two people, but about the widely different relationships that people of different races have with law enforcement and other agents of the state, and how that disparity forms the unequal framework of our society.

The manager of the Starbucks felt discomfort with the presence of the two black men and enlisted a state apparatus to reinforce her status and comfort at the cost of their comfort, dignity and safety.

And it’s the unfortunate truth that in too many situations, the ADL has placed itself on the wrong side of similar issues. From its history of spying on Muslims for the FBI to its hesitation to support the Black Lives Matter movement to its ongoing exchange program between American and Israeli law enforcement to opposing a Muslim community center near Ground Zero, ADL has had a sad history of siding with power against communities of color, only sticking its neck out for marginalized groups when it’s safe, or when there is a shared interest.

And though the leadership under Jonathan Greenblatt has changed, with Greenblatt saying he’d sign up for a Muslim registry if the Trump administration created one, the ADL’s history is too steeped in betraying communities of color to be a good partner for Starbucks in this venture.

The ADL has not lived up to its full potential, and has failed to use its position and privilege to consistently assist the most vulnerable.

True allyship cannot come only when things are safe. Allyship must come with the explicit understanding that true equality will mean sacrifice of privilege and sometimes safety. The ADL fails to do so way too often.

The Women’s March has failed this mandate, too, as when Mallory couldn’t condemn Farrakhan. And that wasn’t the first time, either. Last year, the the March for Racial Justice was scheduled for Yom Kippur, when many if not most Jews would not be able to attend. This oversight enraged many, including myself. Similar to now, many Jewish activists were upset and called the move discriminatory. To appease those who were upset, March Organizers scheduled an additional event in New York the following day.

At the Sunday event, another Womens’ March activist and friend of Tamika Mallory, Linda Sarsour, was the final speaker. She had critical words for many of those in attendance. “It is up to you to allow communities of color to trust you; and it is in the way that you show up that will allow me to understand whether I choose to trust you to protect my life,” she said. “Do not center yourself,” Sarsour added.

She was right. And it took the Starbucks-ADL snafu for me to understand that. For true allyship requires not just assistance in the fight against oppressive forces, but the acknowledgment of complicity. All oppressions, whether deliberate or by way of unintentional exclusion, benefit one another.

The mistake that many of us made, including this writer, is an assumed entitlement within the fight for racial justice, while the position of the marginalized in society is still not secure. Allyship requires sacrifice, it requires centering others, and often taking a back seat in the conversation.

In the ADL’s defense, they are in a difficult position intellectually. The story of the Jew is one of perpetual oppression, discrimination and slaughter. However, it’s undeniable that in the 21st-century United States, assimilated Jews have (mostly) reached the same status as non-Jewish whites, in terms of housing, employment and treatment by law enforcement. And like most beneficiaries of privilege, Jews are often blind to it.

The ADL is similar. While good-intentioned, they often see only part of the picture. It is the blindness that makes them inadequately prepared to lead the effort necessary at Starbucks. In the end, they have been dropped from leadership, while still remaining in an advisory role, which is good.

Perhaps they can learn from this experience, rather than teach what it means.