Israel Just Recognized Itself As A Jewish State. Stop Asking Palestinians To. 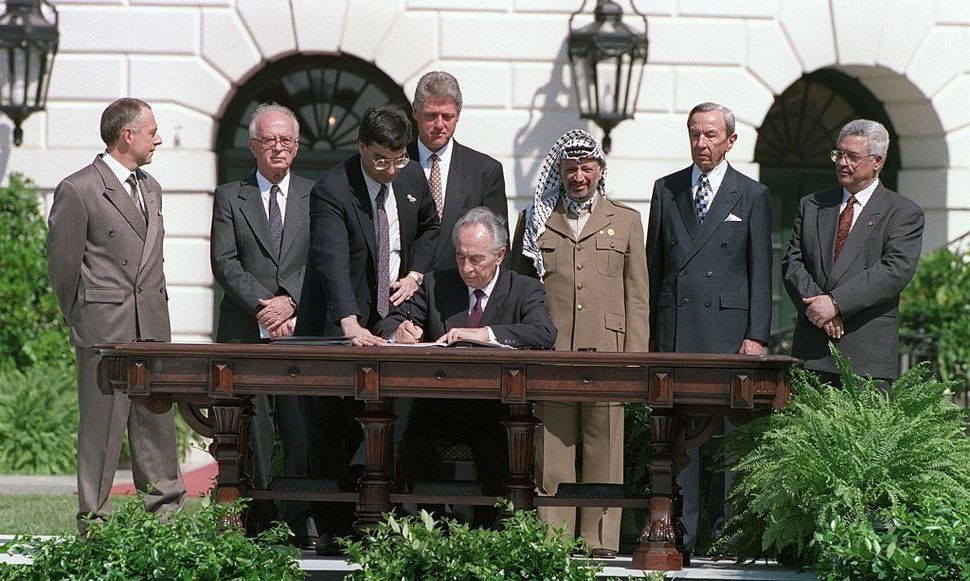 The passage of a constitutional provision defining Israel as a Jewish state is clearly of immediate and substantial significance for the state’s Arab citizens. But Israel makes its Jewishness a central component of its negotiations with Fatah and Hamas, too, holding recognition of its Jewish identity up as a bar for entry to peace negotiations.

The Israeli demand that Palestinians recognize Israel as the nation-state of the Jewish people was injected into negotiations for a final peace settlement by Prime Minister Benjamin Netanyahu in his important Bar-Ilan address of June 14, 2009.

This was the landmark endorsement by Netanyahu of a two-state solution to the Israeli-Palestinian conflict — provided the Palestinian state was demilitarized, Israel had defensible borders and Jerusalem remained the united capital of Israel. To these conditions was added the requirement that “Palestinians recognize Israel as the state of the Jewish people.”

This condition has been a fixed feature of Israeli-Palestinian diplomacy since then, including during the ill-fated Kerry mission of 2013-2014, the one major effort at a final settlement during these years. The idea enjoys widespread support among the Israeli public, since it seems only reasonable that former foes, signing on to a permanent peace and an “end to the conflict,” come to terms with the reality of Israel’s Jewish identity.

A 2010 survey of Jewish Israelis by the Saban Center for Middle East Policy showed 75% support for demanding Palestinian acceptance of the formula; roughly half of these supporters would require it even as a condition for opening negotiations in the first place.

Clearly such recognition from an official Palestinian source would be more than welcome, were it achievable. Palestinian acceptance of Israel’s Jewishness, even if only declaratory, would be a good thing.

But from a strategic perspective there is little for Israel to gain in giving this demand a high priority or by making it a sine qua non, an essential condition.

Recognition of one state by another, in traditional international diplomacy, generally depends on the recognized state having effective authority within its borders and showing willingness to abide by international commitments and rules (reason enough to oppose, for example, recognition of Hamas rule in Gaza).

Sometimes the recognizing state has imposed additional criteria regarding the internal arrangements of the state being recognized. But it is hard to think of cases where the state being recognized has imposed additional conditions, even as part of peace agreements. In putting such an unprecedented condition on the agenda, Israel has little understanding or support in the international community.

Moreover, putting such weight on verbal formulae does not really address Israel’s core security concerns. My former mentor, Hans Morgenthau, used to stress one key diplomatic precept: “Give up the shadow of worthless rights for the substance of real advantage.”

Governments can make verbal commitments and then ignore them; what counts in any peace agreement are the concrete arrangements that give both sides an incentive to keep the peace.

The vulnerability of Sinai to Israeli reconquest helps to reinforce Egyptian observance of the peace. In any Israeli-Palestinian settlement, the concrete arrangements on the ground — demilitarization in particular — will be of much greater import than any particular words extracted from the lips of the Palestinian leaders at that particular moment in time.

Palestinian leaders have also pointed out that they have since 1993 recognized Israel as a state, with the declaration that “the PLO [Palestine Liberation Organization] recognizes the right of the State of Israel to exist in peace and security.” This is normally all that is expected in diplomatic relations. Why, they ask, should they be required, or even permitted, to pass judgment on Israel’s own self-definition, indelibly etched from the outset in its own founding documents and in a proposed Basic Law that would make it even more explicit? And why should they be asked to undercut the position of Arab citizens of Israel who, as legitimate actors in Israel’s internal politics, have sought to modify that self-definition by making the country “a state of all its citizens”?

Ironically, the stoutest advocates for making Palestinians take this verbal leap tend to come from the same circles that distrust anything Palestinian leaders say. One can never rely on what they say, it is claimed, because they will lie and misrepresent their real intentions, while winking to their own followers to show they don’t really mean it.

If so, what value is there in any verbal concession they make? And in any event, it can always be disowned afterwards by another verbal statement.

Consider the pathetic comedy played out during the Oslo process over the demand that the PLO revise its Charter to eliminate calls for the destruction of Israel. First Yasir Arafat simply announced that any such clauses were now defunct. When it was pointed out that the Charter had its own provisions for revision, the Palestinian National Council (PNC) met and passed a resolution eliminating offending portions of the Charter, but without specifying which parts of the Charter were actually now defunct.

Under pressure, Arafat wrote a letter detailing the clauses eliminated, but again this had no legal standing by the Charter’s own provisions. Finally, after the Wye Agreement in 1998, and in the presence of President Bill Clinton, the PNC met and revoked the specific offending clauses by the specific required procedure.

Even the Israeli government of the time, under Netanyahu, professed itself satisfied.

But what is to stop the PNC from meeting again next week and restoring the Charter’s historic demand for the end of the Jewish state? And if they did, what would that actually change “on the ground,” to use time-honored Israeli language?

It may seem contradictory to question the value of mere words while pointing out that these words are one of the hardest concessions for Palestinian leaders to make, and may in fact be a deal-breaker. (A cynic might claim that this was the purpose, in which case the demand has been brilliantly conceived and executed.)

But life is full of seeming contradictions. It is pointless to contend with what others may continue to believe in their heart of hearts, but it is within the realm of possibility to ensure that they do not have the means or opportunity to act on those beliefs.

Alan Dowty is Professor Emeritus of Political Science at the University of Notre Dame. He has published widely, and lectured in over 30 countries, on the Arab- Israel conflict, Israeli politics and U.S. foreign policy. In 2017 he received the annual Lifetime Achievement Award in Israel Studies from the Association for Israel Studies and the Israel Institute.

Israel Just Recognized Itself As A Jewish State. Stop Asking Palestinians To.