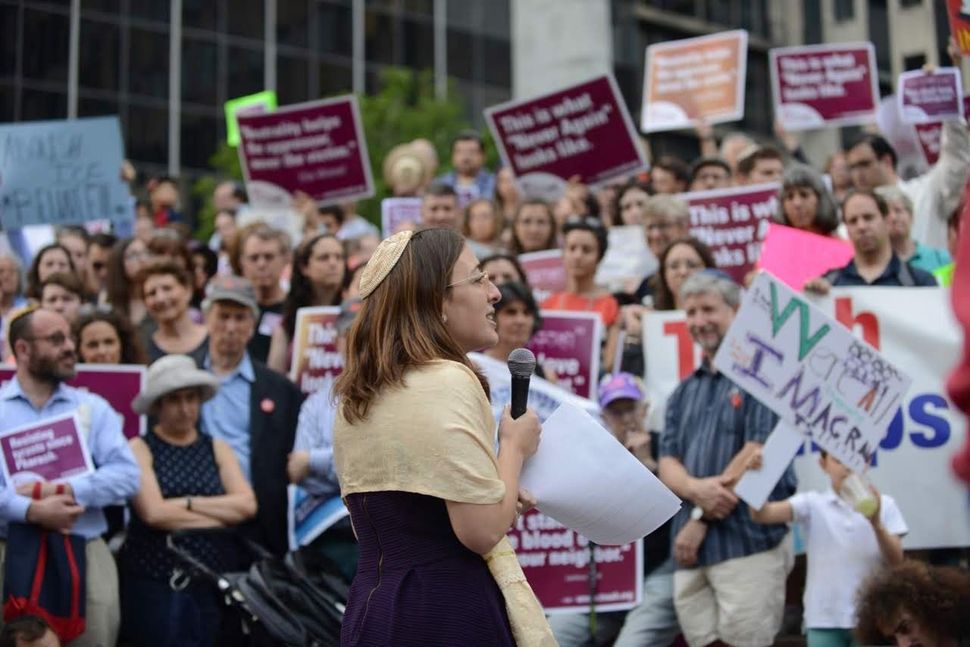 Jonathan Neumann is furious at Liberal Judaism and I understand why.

It was not so long ago that I was angry at them as well. Sadly, though, his anger makes him commit an infraction that is not so different from the transgression that incites his own righteous indignation. He lacerates his political adversaries for misusing a prominent Jewish theological trope, but in the process he unfortunately seems to disregard a well-known Rabbinic aphorism.

In an op ed in the New York Post, Neumann is rightfully upset at liberal Jewry’s cultural appropriation of the weighty religious concept of tikkun olam, repairing the world. He is disappointed that they “quietly lifted [the concept] out of context from a Jewish prayer … to mean social justice.”

Neumann’s claim is true. The term tikkun olam appears in the second paragraph of Aleinu, the thrice-daily coda to Jews’ prayers; and indeed, it is not referring to social justice at all. The idiom, as a matter fact, expresses a key Jewish theological trope, not a universalist sociological value.

Watching others repeatedly misappropriate an important foundational concept can be extremely frustrating. We have seen recently how the African-American, queer, and Native-American communities take umbrage at those who attempt to further their own agendas by borrowing those communities’ cultural tropes. The ultra-Orthodox community is no different. They too revere the uniqueness of their cultural idioms and the specificity of their religious precepts, believing that they are sacred and culturally contingent. Misappropriating them is, in their eyes, therefore a grave sin. They too feel cheated when others misuse their cherished heritage.

I know how such misuse upsets ultra-Orthodox sensibilities because I was once part of that community. I was born and raised in the ultra-Orthodox community. As a matter of fact, I vividly remember my reaction when, as a young and impressionable teenaganger, I learned about the way liberal Jewry was misrepresenting “OUR” foundational tropes. It was deeply upsetting.

True, some who identify with the social-activism ethos have made attempts to rectify this. Liberal stalwart Rabbi Jill Jacobs and progressive academic Aryeh Cohen, among others, have tried to excise the theological premise of tikkun olam from Judaism’s social-action discourse. So far, though, they have not been successful. The trope still plays a formative role in the conscience of the liberal laity. Orthodox resentment toward liberal Judaism consequently, has not subsided. The resentment still runs deep. Writers like Neumann give voice to that anger. Unfortunately, in the pursuit of articulating his view, he commits a transgression no less egregious than the one that makes him berate his political opponents.

The Talmud sages lived in a milieu of fervent religious conflict. They were constantly critiqued by their contemporaries for not being appropriately religious. Some thought they were too stringent, while others alleged they were not sufficiently punctilious. The Rabbis often responded in kind, aggressively fighting off their critics, thwarting those who doubted their legitimacy. While they recognized that those debates sometimes can be extremely upsetting, they nevertheless exhorted their students against allowing themselves to be overtaken by their righteous indignation. A passion for ideas, they believed, does not become an excuse for negating your opponents’ humanity. Being indignant is admirable, but not at the price of your adversary’s dignity. Doing that is morally reprehensible.

Neumann’s essay (and even more so in his new book “To Heal The World? How The Jewish Left Corrupts Judaism And Endangers Israel”) is, sadly, an implicit rejection of this key disputational ethos. His anger blinds him to the dignity of those whose ideas he so vehemently rejects, to the point that he seems to overlook their innate sacredness. His dismissive tone demeans the sanctity inherent in all of us because, as the Bible tells us, we are all created in the image of God. Just as we are told to hate the sin, not the sinner, so too does it behoove us to critique ideas, not those who express them. Departing from Judaism’s humanitarian values is no less a crime than misappropriating them. The latter misconstrues Judaism’s theological tenets; the former tramples on Judaism’s behavioral standards. Both are equally damaging to the culture Neumann so vigorously defends.

The unfortunate consequences of Neumann’s uninhibited fury are not limited to his letting personal animosity obscure the proper prescription for how to demand rectification of what he deems as an inexcusable misappropriation. It also causes him to fall into behavior predicted by another Rabbinic observation: that anger blurs one’s mind, causing consequential mistakes and detrimental oversights.

Neumann’s resentment of progressive Judaism’s flag bearers makes him create dichotomies where none exist. He presents his readers with a stark choice between liberal values and passionate commitment to Jews and devotion to Judaism. In fact, those values can live in perfect harmony.

Social conscientiousness does not undermine one’s ability to be religiously devout. It enhances one’s religious devotion. Universal care for the oppressed or the disenfranchised does not diminish one’s love for the people or the land of Israel. Repairing oneself is not incompatible with repairing the world. They are actually one and the same. We make the world a better place by bettering ourselves; and vice versa: working toward a better world is a springboard to attaining an improved self.

True, misappropriating cultural values is wrong and, understandably, makes Neumann and many others righteously indignant. Rectifying that is indeed a moral duty. Neumann’s essay, however, overlooks the fact that fighting for one value does not justify negating other values. As my favorite childhood teacher taught me: you champion ethics ethically. Doing otherwise is unethical.

Ysoscher Katz is the senior rabbi of PHS, a Modern Orthodox shul in Prospect Heights, Brooklyn.