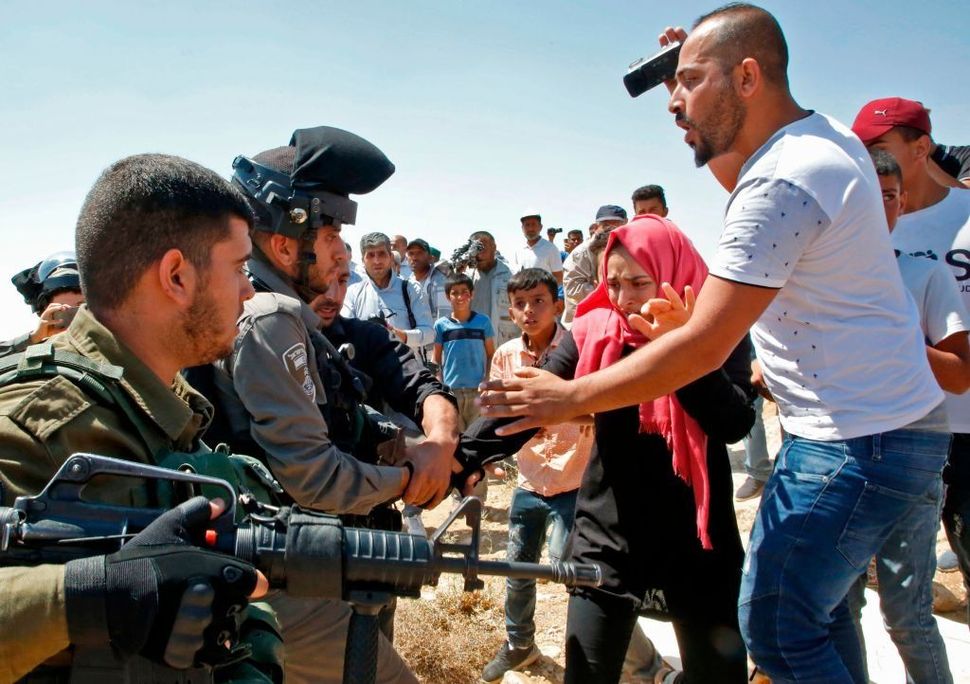 Palestinian protesters and Israeli soldiers scuffle during clashes in the village of Yatta, south of the West Bank city of Hebron, on July 11, 2018. (Photo by Hazem Bader/AFP/Getty Images) Image by Getty Images

The 9th of Av, on which observant Jews commemorate the destruction of the Second Temple, has never been the most popular Zionist holiday. The ingathering of the exiles and the return of Jewish political sovereignty obviated, for many Zionists, any need to mourn the Temple. Some thought the day should be left to fall into oblivion, and others sent their children out on summer camping trips instead of fasting. At one kibbutz, the dining hall nearly erupted into fist-fights over an attempt to read the book of Lamentations.

This animosity toward the 9th of Av prompted the Socialist Zionist intellectual Berl Katznelson to write an impassioned response in the newspaper Davar. In his article “Destruction and Dissociation,” Katznelson argued that the communal memory of the destruction was the very thing that had made the Zionist movement possible.

Young Zionists could not remain ignorant of religious tradition, lest it lead them to disconnect from the very Jewish identity that had made their lives as “new Hebrews” possible. Zionism was not detached from the history of the Diaspora, and Zionists needed to honor and understand the experience of the Jews in exile.

In recent pieces, self-proclaimed “liberal Zionists” Jarrod Tanny and Gil Troy have both expressed a desire for a diaspora Zionism that is detached from the details of the political situation in Israel, particularly the ongoing military rule over millions of Palestinians. In a response to Tanny, Yoav Schaefer and Harry Reis have shown that this is not a liberal approach.

I want to show, in the spirit of Katznelson, why it is not a Zionist approach, either.

In his response to Schaefer and Reis, Tanny wonders if perhaps he and his compatriots should stop calling themselves liberal Zionists, and instead identify as “progressive American Jews who see merit in the existence of Israel.” Similarly, Gil Troy asks young progressive American Jews, “why not scrutinize neighborhoods mere miles from [you], rather than caricaturing a target 6,000 miles away?”

Both of these statements relish and rely on distancing Israel as a real entity from what it means to be a “Zionist” or “supporter” of Israel.

Tanny wants to turn Zionism into an affirmation of faith — merely believing in Israel makes one a Zionist. Troy wants young American Jews to be connected enough to Israel to support it nearly unconditionally, but not so connected that they feel they have a stake in its future and a right to an opinion about its policies.

The irony in this version of liberal Zionism is that its passivity, its distance from political reality and its aversion to action are the very antithesis of what Zionism has historically stood for.

The early “political Zionists” were searching for a way for Jews to control their own destiny in the context of diaspora anti-Semitism. Writers like Leon Pinsker and Theodor Herzl thought that a Jewish national movement would allow Jews to move from observers of history to actors on the stage of world politics.

As the project of settling the land of Israel began to achieve moderate success, Zionist leaders across the political spectrum from Chaim Weitzman to Vladimir “Ze’ev” Jabotinsky expended tremendous time and effort traveling through diaspora communities trying to convince both leadership and laypeople that what goes on between the Jordan and the Sea should matter to all Jews, no matter where they live.

From the perspective of the Yishuv, the American Jewish community was often frustratingly apathetic to the struggles of the “Pioneers” to build a “state on the way.” According to historian Menahem Kaufman, David Ben Gurion struggled mightily to convince the American Jewish Committee to take any interest at all in the goings-on in Palestine.

After the Six-Day War and the massive outpouring of pride and support it generated among American Jews (not to mention the ongoing backlash against Israel it inspired around the world), the idea that Diaspora Jews could feel apathetic and disconnected from Israel must seem ridiculous. But that is precisely the attitude that some “liberal Zionists” seem to want to encourage. Jewish life in Israel is, for them, an idea to be approved of, not an ongoing struggle that demands our time, attention and engagement — and not only our checkbooks.

Underneath the slogan of “support for Israel,” the reality of much of American Jewish life remains, in a practical sense, non-Zionist. Sitting back and being proud of the Jewish state is not a “Zionist” approach any more than the stoic acceptance that pogroms are a fact of diaspora life was, or watching disinterestedly as the kibbutzim tried to drain the Hula would have been.

From this perspective, it is precisely the movements that urge our engagement with the difficult details of Israeli political life that are most faithful to the original spirit of political Zionism. The New Israel Fund, Breaking the Silence and other organizations that force world Jewry to engage with the reality of Jewish power are, in their commitment to political action, the real inheritors of Weitzman and Jabotinsky.

Even IfNotNow’s controversial “agnosticism” about the idea of Zionism is less a threat to the political future of the Jewish people than a statement that, where the future of Israel is concerned, labels cannot stand in the way of deeds.

Liberal Zionists’ unwillingness (or, more charitably, sluggishness) to decisively intervene in the ongoing expansion of the settlement project and the occupation regime is thus an abdication of responsibility and autonomy.

What has always defined real Zionism is not titles, slogans or words — it is actions, and a belief that changing the course of Jewish history is not just possible, but necessary. Here, the left-wing voices to which Troy and Tanny seem allergic have shown more Zionist spirit than most paid-up members of AIPAC and the AJC.

As we approach Tisha B’Av, the American Jewish community, and particularly the liberal Jewish community, has an opportunity to reassess our “dissociation” from the realities of Jewish politics. As Berl Katznelson understood, Zionism demands that Jews in Israel and the Diaspora continue to actively engage in each other’s realities.

The reality in Israel today is one where the greatest threat to Jewish sovereignty comes from the Jews themselves, through the lawless and cruel policies of Israeli rule in Judea and Samaria. And it is we Jews who have the greatest power to change this. To claim otherwise would be anti-Zionist.

Jacob Abolafia is a PhD candidate in Government at Harvard University.