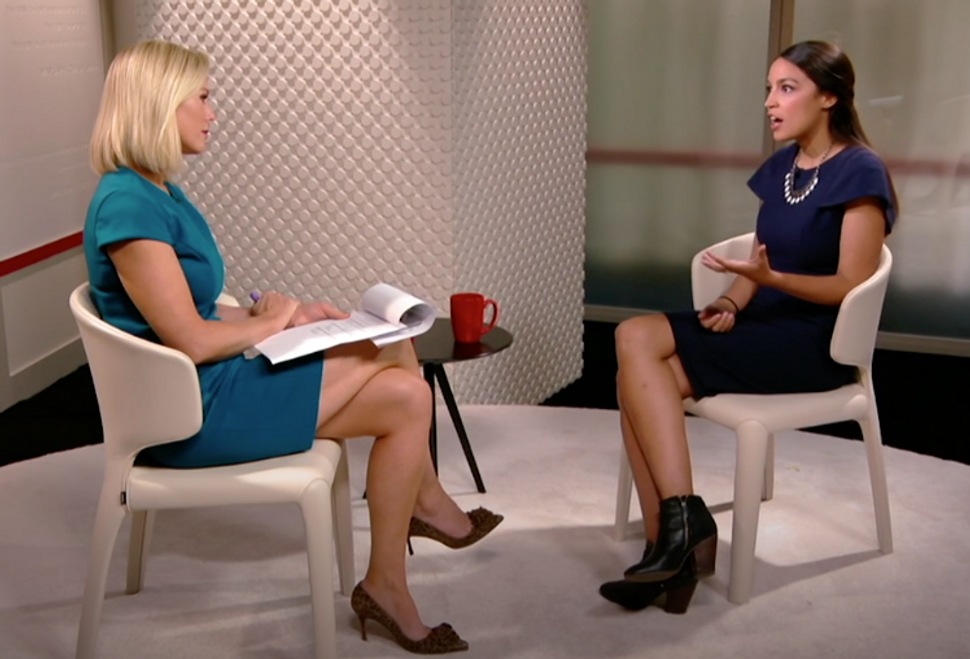 On Friday night, PBS aired an interview with the upstart socialist candidate for New York’s 14th congressional district Alexandria Ocasio-Cortez. The interview was half an hour long, and touched on many of the candidate’s policy issues like free college and free healthcare.

But to Monday morning Twitter, it was Ocasio-Cortez’s comments on Israel that were circulating, accompanied by a combination of mockery and rage:

In a widely circulated tweet, Ocasio-Cortez seemed to struggle to answer basic questions about the Israeli-Palestinian conflict.

“You used the term ‘occupation of Palestine’,” Margaret Hoover asked. “What did you mean by that?”

“Do you think you can expand on that?” Hoover presses.

“Yeah, I mean, I think, I am not the expert on geo-politics on this issue,” Ocasio-Cortez said with a laugh.

And that’s the end of the clip.

Many took this as proof not only of Ocasio-Cortez’s ignorance but of malice, focusing on her use of the phrase “the occupation of Palestine” as evidence of her willingness to assume a position hostile to Israel out of ignorance.

But the truth is, the clip was cut in such a way as to misrepresent Ocasio-Cortez’s true beliefs about the region.

Here’s the clip in its entirety:

Nineteen minutes into the interview, Hoover brings up the fact that Ocasio-Cortez tweeted during her campaign that Israel was massacring Palestinians at the Great Return March in Gaza. She then asks Ocasio-Cortez point blank what her position on Israel is.

“I believe absolutely in Israel’s right to exist,” Ocasio-Cortez says unambiguously. “I’m a proponent of the two state solution. For me, this is not a referendum on the state of Israel.”

She goes on to explain that she was looking at the Gaza protest as an activist engaged in human rights work, and saw unarmed protestors being shot.

She’s right: Unarmed protestors were shot during the protests. And Ocasio-Cortez’s tweet came two days before Hamas claimed the lion’s share of the protestors who were shot as members of Hamas – and even some of those were unarmed.

Hoover does not mention any of this. She merely points out that protestors in Gaza are different than Americans expressing their First Amendment right to protest. It’s true; Palestinians don’t have a First Amendment right. It’s also true that some of the protestors in Gaza were violent. But why Gazans shouldn’t have a right to protest, Hoover doesn’t say.

Ocasio-Cortez concedes. “Yes, but, I also think that what people are starting to see at least in the occupation of Palestine is just an increasing crisis of humanitarian condition. And that to me is just where I tend to come from on this issue,” she said.

That’s when Hoover asks her what she meant by the term “occupation of Palestine” in the clip circulating on Twitter.

It’s true that Ocasio-Cortez does not seem to understand which parts of Israel are occupied and which parts aren’t, or what role Hamas and Abbas play in making the lives of Palestinians unlivable.

And yet, everything Ocasio-Cortez said was true. Palestinians are occupied by Israel. They do have difficulty with their houses and homes. And they should have a right to protest nonviolently, even if Israel, Mahmoud Abbas and Hamas collectively refuse to grant them this right.

Israel is responsible for the systematic dispossession of Palestinian civil rights and property. And a left-wing politician should be able to admit that.

Even more importantly, Ocasio-Cortez admits her own deficits.

“I am not the expert on geo-politics on this issue,” she said with a laugh. “For me, I’m a firm believer in finding a two state solution on this issue,” she reiterated. “I look at things through a human rights lens. I may not use the right words. I know this is a very intense issue.”

“I come from the south Bronx,” Ocasio-Cortez tells Hoover. “I come from a Puerto Rican background. Middle Eastern politics is not exactly at my kitchen table every night. But I recognize this is an intensely important issue for people in my district and people across the country. I’m willing to listen. I’m willing to evolve on this issue, as I think many Americans are.”

This kind of openness and humility is not only refreshing; it’s exactly what one wants to hear from a young, new politician. No doubt come November, Ocasio-Cortez will have a firmer handle on these crucial issues.

In fact, Ocasio-Cortez is now in danger of losing support from the left, intolerant as it is of dissent, especially on the subject of Israel-Palestine.

It wasn’t a perfect interview. Ocasio-Cortez once again showed that her platform is light on civil rights issues like criminal justice reform. But on the topic of Israel, her politics – opposing the occupation, supporting a two state solution – are completely in line with those of most American Jews. The mainstream Jewish American community could not have hoped for a better representation of their own values.

Ocasio-Cortez’s campaign did not respond to a request for comment.