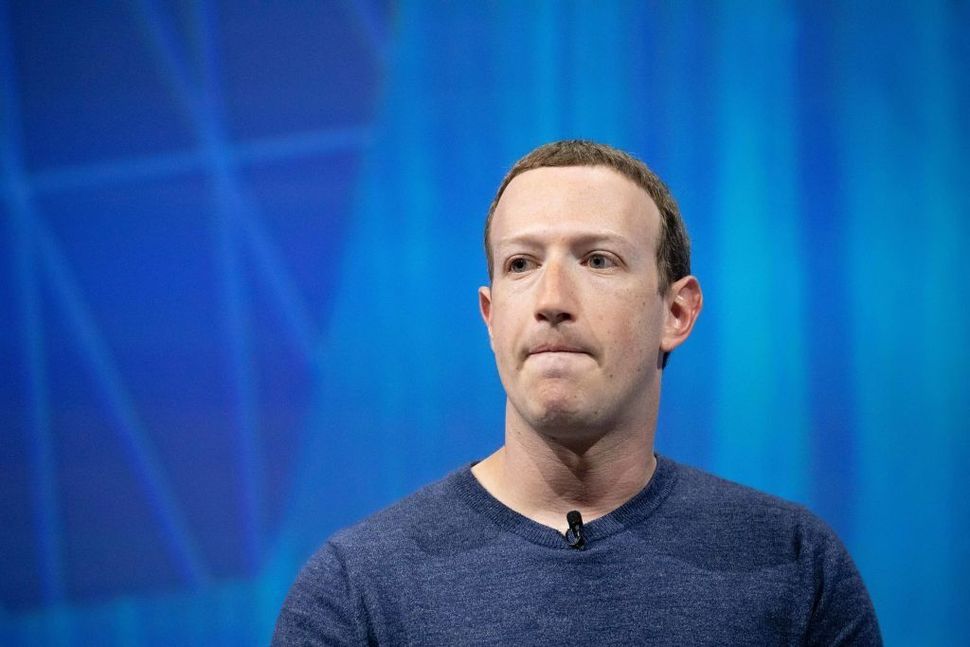 Mark Zuckerberg announced this week that he would not remove Holocaust deniers from Facebook, because he did not think they were deliberately lying.

In an interview with Recode, Zuckerberg, who is Jewish, raised the issue of Holocaust denial himself as an example of speech Facebook would allow on its platform.

“I find [Holocaust denial] deeply offensive. But at the end of the day, I don’t believe that our platform should take that down because I think there are things that different people get wrong. I don’t think that they’re intentionally getting it wrong,” Zuckerberg insisted. For that reason, he says, Facebook wouldn’t delete Holocaust denial posts, though the company might make such content less visible through algorithm manipulation.

For Zuckerberg, the problem with Holocaust denial is that it is wrong — and in his view, you shouldn’t censor someone for being wrong. There’s no way to tell the intent of Holocaust deniers. As long as someone is not deliberately lying, in his view, they should be given the benefit of the doubt.

“I just don’t think that it is the right thing to say, ‘We’re going to take someone off the platform if they get things wrong, even multiple times,’” he insisted.

“Bullshit,” here, is a technical term. In his 2005 classic of moral philosophy “On Bullshit,” Harry G. Frankfurt explains that bullshit is not exactly the same thing as lying.

A liar is engaged in a deliberate attempt to convince you of something the liar knows to be false. The problem with the bullshitter, in contrast, “Is not that she fails to get things right, but that she is not even trying.” A bullshitter “is not concerned with the truth value of what she says,” Frankfurt explains. “It is just this lack of connection to a concern with truth — this indifference to how things really are — that I regard as of the essence of bullshit.”

Frankfurt’s account is, obviously, somewhat lighthearted; he doesn’t discuss Nazi propaganda. But his definition of bullshit is useful in understanding hate speech in general, and Holocaust denial in particular.

Nazis do not put forward offensive ideas out of innocent confusion. Rather, Nazi propagandists deliberately set aside truth in pursuit of ideological goals — those ideological goals being the murder of Jewish people.

The leaked style guide of the neo-Nazi site the Daily Stormer explains, in ugly detail, the production of the bullshit. The guide, written by site creator Andrew Anglin, explains to writers how best to sway readers to hatred and violence. In particular, Anglin’s “Prime Directive” is to “Always Blame the Jews for Everything.”

“As Hitler says, people will become confused and disheartened if they feel there are multiple enemies. As such all enemies should be combined into one enemy, which is the Jews. This is pretty much objectively true anyway, but we want to leave out any and all nuance” (emphasis mine).

Zuckerberg could well look at this and say, “Well, it’s offensive, but it’s not a lie.” Anglin specifically says that Jewish people should be blamed for everything because Jewish people are “objectively” to blame for everything; he is expressing his sincere, hateful beliefs. He isn’t, technically, lying.

But while he may not exactly be lying, he isn’t telling the truth, either. He is bullshitting, and encouraging others to spew evil bullshit. Anglin thinks Jewish people are “pretty much” to blame for everything, but wants to “leave out any and all nuance” in order to make his message clearer, and to inspire purer commitment and malevolence in the Nazi-curious. Anglin breezily dismisses the question of truth or falsehood. He is indifferent to how things really are, so long as his words promote hate.

Following Zuckerberg’s comments, the Auschwitz Memorial tweeted, “Holocaust denial is rejection, manipulation & ignorance of facts. It is a lie fueled by ideological hatred & antisemitism.” The fact that Holocaust denial involves “rejection, manipulation & ignorance” is crucial. People who claim the Holocaust didn’t happen don’t actually care whether it happened or not. Nazis like Anglin are not engaged in good-faith historical inquiry. They are engaged in a program of hatred and violence, and their ignorance, to the extent they are ignorant, is strategic doublethink. When they are not technically lying, they are engaging in bullshit.

And the point of the bullshit is precisely to dupe people like Zuckerberg. Anglin explains that his writers should use copious quotes from news items in order to “co-opt the perceived authority of the mainstream media.”

Similarly, the scholarly façade of Holocaust denial — the pretense that the issue is not anti-Semitism, but simply a dispute about historical facts — is a deliberate obfuscation. Nazis don’t care if the Holocaust happened. Holocaust denial is not a scholarly pursuit. It’s a rhetorical device intended to induce the gullible to treat Nazism as an intellectual error, rather than as a call to genocide.

When Zuckerberg says that Holocaust denial is a mistake, he is literally cosigning Nazi propaganda. He may use his search algorithm to make Holocaust denial posts less visible, but he’s using his massive international platform to launder Nazi bullshit.

Nazis lie all the time, and those lies are corrosive. But equally dangerous is the fact that bigots often don’t make meaningful distinctions between lies and truth. Zuckerberg naively assumes that Holocaust deniers believe what they say. But Nazis don’t care about truth. They care about hate. Posts by Holocaust denier are all bullshit. Facebook should delete them.

Noah Berlatsky is the author of the book “Chattering Class War: Punching Pundits from Chait to Chapo and Brooks to Breitbart.”