Neo Nazi Rallies Show Minorities That We Have To Protect Ourselves 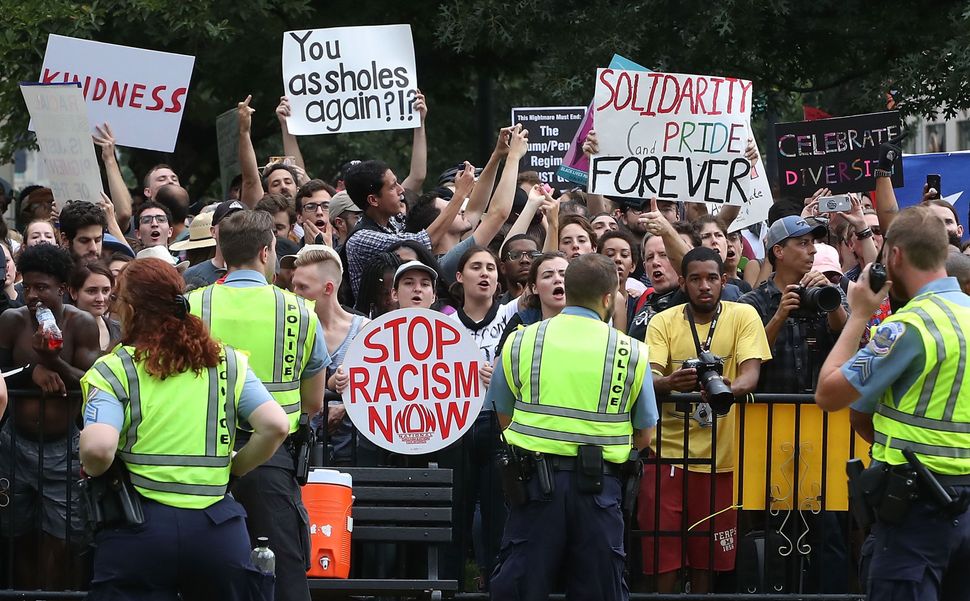 Although droves of counter-protestors eclipsed white nationalists in D.C. this past weekend during the second Unite the Right rally, the significance of the event shouldn’t be understated.

It raised crucial questions about the safety of minorities and other marginalized communities, and the ability — and willingness — of law enforcement to protect them.

Indeed, the message of this weekend’s rally was clear: We are on our own, and no one will protect us but ourselves.

Defenders of the rally cited the protestors’ right to free speech. This is nothing new. White nationalists and neo-Nazis have always been allowed to harass people and have been given unprecedented levels of protection under the guise of “free speech.”

But constitutionally, speech can only be free if it does not incite imminent chaos and danger, a condition that Unite the Right has failed to meet.

The events of last year’s Unite the Right in Charlottesville showed that this group of people deliberately intended to incite and dole out imminent violence, an intention that played out in the murder of Heather Heyer. This weekend’s rally took place on the anniversary of Heyer’s death, an insidious scheduling choice that carried the threat of violence.

These white nationalists came to DC with every intention of expressing their desire to eliminate black people, other people of color, Jews, immigrants, LGBTQ individuals, and all their other targets. One neo-Nazi politician, Patrick Little, even toted a sign around that read “Expel the Jews.”

These people are proven threats; they are motivated by an ideology that led to the death of Nia Wilson, whose throat was slit by a white supremacist in Portland, and countless other deaths.

They did not come in peace.

White nationalism is domestic terrorism. It’s a philosophy that depends upon the elimination or expulsion of most of the American population. It’s not a political opinion, and allowing people to espouse its values does not make us free.

Since the election of Donald Trump — a veritable racist, alleged rapist, and probable anti-Semite — that reality has been pushed to the forefront, like a pulsating alarm clock that you can’t un-hear.

And yet, despite the threat they pose to millions of innocents, our government gives these people a platform. Why? Because our nation subconsciously believes that their calls for hatred and genocide are intrinsically more valid that the calls of marginalized people for their humanity.

At least, that is the message we get when these people’s right to rally is protected over our right to humanity.

Our government has a deep affection for white supremacists, evidenced by Trump’s statement that there were good people “on both sides” of last year’s rally. As such, our government bestows gifts upon the objects of its affection, gifts like police escorts instead of arrests, protection from prosecution instead of surveillance, permits for dangerous events instead of rejection, even their own trains.

As I try to imagine a scenario in which violent Black or Arab protestors would be given the same courtesy, I find it to be a vigorous mental exercise.

Even my own experience with “free speech” has not been one of such grace. For example, when I peacefully protested the inauguration of Donald Trump, my group and I were greeted with smoke grenades and sniper rifles trained on us.

The white supremacists surrounding us, however, passed through my hometown’s streets freely. They moved among the Coast Guard tanks and police barricades with ease, with Make America Great Again hats that might as well have been Ku Klux Klan hoods.

On that day, too, I heard calls to eliminate the Jews. I heard racial slurs and I was pushed and grabbed by white men and neo-Nazis. And yet, the people who were arrested were those who called for an end to hate.

From where I’m standing, it seems that so many people had the power to stop this rally, and protect people of color and LGBTQ people. But they didn’t want to.

Instead, like we did on Inauguration Day, marginalized people showed up in droves for themselves.

With the power of their voices and their sheer numbers, they outshined hate yesterday.

While the government tried to separate the different groups of protestors, it was largely the turn-out of so many counter-protestors (largely members of targeted groups) that revealed the limits of white supremacists.

But as inspiring as that is, it carries with it a dangerous precedent; it is now the responsibility of our most vulnerable citizens to protect themselves from domestic terrorists.

For many, this is not news. Black and indigenous people have never relied on governmental structures to keep them safe; in most cases, it was these very structures that were either complicit in our oppression or actively targeted us.

As a society, the list of things we cannot depend on our government to provide for us is long. They don’t provide us with healthcare, education, or accessibility. And if you are black, brown, LGBTQ, or disabled, you’re at risk for experiencing state-sanctioned violence.

If private citizens cannot depend upon their government to protect them, does that government now need to be replaced?

For me, the answer is a resounding fuck yes.

Our nation has always been in distress. But now, we all know it. And that knowledge represents both a great opportunity and a great responsibility to fix this problem.

It’s time for a real revolution. Women of color and other marginalized people need to storm into political offices and change our national priorities. Laws need to be rewritten or repealed. We need to take the language of slavery out of our Constitution.

We need to dismantle the Electoral College, so that the election of 2016 (and 2000) will never happen again. The police need to be disarmed and ICE needs to be abolished. Indigenous nations need prosperity and true sovereignty. We need to solve our climate change problem, so that we will still have a country to reform in a hundred years. We need healthcare, child care, maternity leave, and affordable housing.

Other countries have these things, but for us Americans, who have inequality and injustice codified into our nation’s DNA, this will require nothing short of radical revolution. For so long our government has gotten away with this by telling us that change on this scale is impossible — a lofty, idealistic goal. But it isn’t. Not only is it possible, but it’s necessary for our nation’s survival.

When Trump is gone, I don’t want to return to the same old neo-liberal status quo that everyone is glorifying. I want to live in a nation that I can be truly proud of, that I can raise my children in, and that I know will protect me from domestic terrorists.

It’s great the counter-protests on Sunday were such a success, but it’s not enough to merely replace neo-Nazis at rallies. We must replace the systems that led to us electing one of their ilk. We must get rid of the governmental structures and laws that worship white supremacist ideals. The clock is ticking, and our time is almost up.

Nylah Burton is a writer of good journalism and mediocre poetry. She has been described by racists and anti-semites as “emotional, disrespectful, and volatile.” She thinks this is the best review of her writing she’s ever received. Her grandma has it on the Fridgidaire. You can follow her on Twitter, @yumcoconutmilk.

Neo Nazi Rallies Show Minorities That We Have To Protect Ourselves