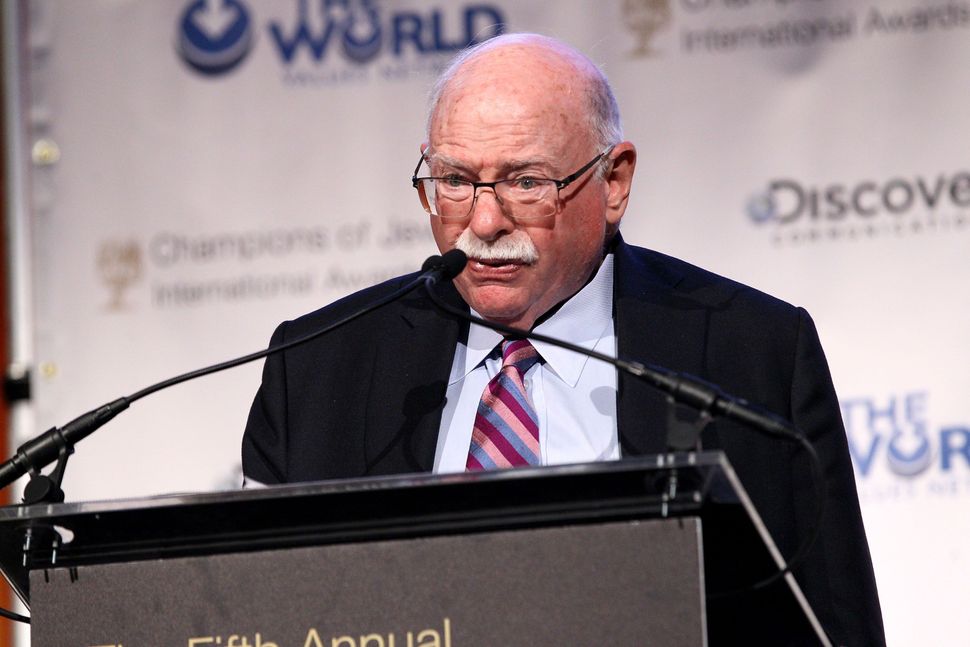 I am trying to figure out when fertility became the enemy of feminism.

When caring about children and family became a misogynist act. When supporting the institution of marriage as the foundation of a healthy and stable society suddenly became an anti-woman sentiment.

Because that’s what I’m hearing in the mistaken attempts to link a couple of powerful Jewish men who’ve behaved very badly to the real and pressing concerns about the Jewish future.

The men in question are Michael Steinhardt, hedge fund billionaire and expansive philanthropist, who has been accused of multiple accounts of sexual harassment, and Steven M. Cohen, famed sociologist, who has acknowledged acting inappropriately and abusing his power over some women in his academic field.

The case against them posits that their boorish behavior reflects a disrespect for women, and this disrespect also explains their professional obsession with encouraging “continuity” — that is, encouraging the growth of Jewish families, especially (in Cohen’s case) among the non-Orthodox. To study, analyze and promote family life means to denigrate women, these critics say.

As my colleague, Batya Ungar-Sargon, wrote: “The focus on inmarriage and women’s bodies as the site where Jewish continuity must happen is sexist and homophobic.”

Well, when she puts it like that, I can see her point. By obsessing so crudely about fertility and procreation within the tribe, Steinhardt and Cohen have done a disservice to the real challenge: which is to do all we can to create a vibrant, inclusive, diverse, enticing Jewish future that puts family life as its foundation. And far from being anti-feminist, this outcome should elevate the status of women and broaden their choices. Which is what feminism is all about.

Steinhardt and Cohen are correct in pointing out that, outside the Orthodox world, Jewish men and women are marrying later or not at all, and are having fewer children and creating fewer families. Those are the facts.

This is happening not because of the misdeeds of two men, even two men with money (Steinhardt) and intellectual power (Cohen) who, the critics say, have somehow singlehandedly dominated the Jewish communal agenda and imposed their will on others.

It is happening because non-Orthodox Jewish men and women are acting like American men and women. U.S. births are at a 30-year low, marriage rates are down 9% over the past quarter century, and the share of Americans who have never married is rising.

If they do marry, Americans are increasingly selecting partners from a different religious group (though not from a different political persuasion.) Here, too, non-Orthodox Jews are simply acting like their fellow Americans, only more so.

If you view marriage as an oppressive, irrelevant institution, if you view child rearing as a burden only women bear, if you view these trends as the only natural reaction to women’s empowerment — well, I can understand why talk of a Jewish future focused on marriage and family could be seen as patriarchal and confining.

But — sorry if I offend those who hold this view — that is a misguided, self-defeating response.

Michelle Shain, an associate research scientist at Brandeis University, who was mentored (but not victimized) by Cohen, put it well in a column for the New York Jewish Week, which first reported on the allegations against both men:

“As a feminist, I wholeheartedly reject the suggestion that marriage and childbearing stand in opposition to women’s professional success and control of our bodies. This is exactly the sort of zero-sum thinking that slows the march of egalitarianism.”

She went on to point out the obvious: survey data consistently show that the vast majority of American Jewish women want to marry and have children. (I trust men feel the same.) And, therefore, “understanding the pathways and obstacles to contemporary marriage and parenthood benefits, not subjugates, Jewish women.”

To promote a Jewish future that puts marriage and children at its foundation is not to shun or shame those who choose another path. It is not to exclude those who create non-traditional families. It is not to turn away non-Jewish partners and parents.

And it certainly does not require saluting crude comments from Steinhardt, Cohen or anyone else.

Instead, it means enunciating normative Jewish values and adapting them to our contemporary situation. In my mind, that means the community should do more to encourage and support committed relationships; provide resources so that parents can balance work and family; make Jewish day school, summer camp and other educational initiatives affordable and accessible; and promote gender equality in all Jewish institutions.

If the enterprise is to continue — specifically, if egalitarian, progressive Judaism is to survive and thrive in this anti-establishment-religion moment — then one generation must beget the next. We can welcome those who want to join us without official conversion. We can expand our definition of who is a Jew.

But in the end, it is the institution of marriage — thankfully broadened now to include gays and lesbians — that provides the committed bedrock of this and any society. And it is a focus on nurturing children that creates a communal legacy.

Besides, my children — and now, my grandchildren — are the greatest joy in my life. Why wouldn’t I want everyone to share that experience?