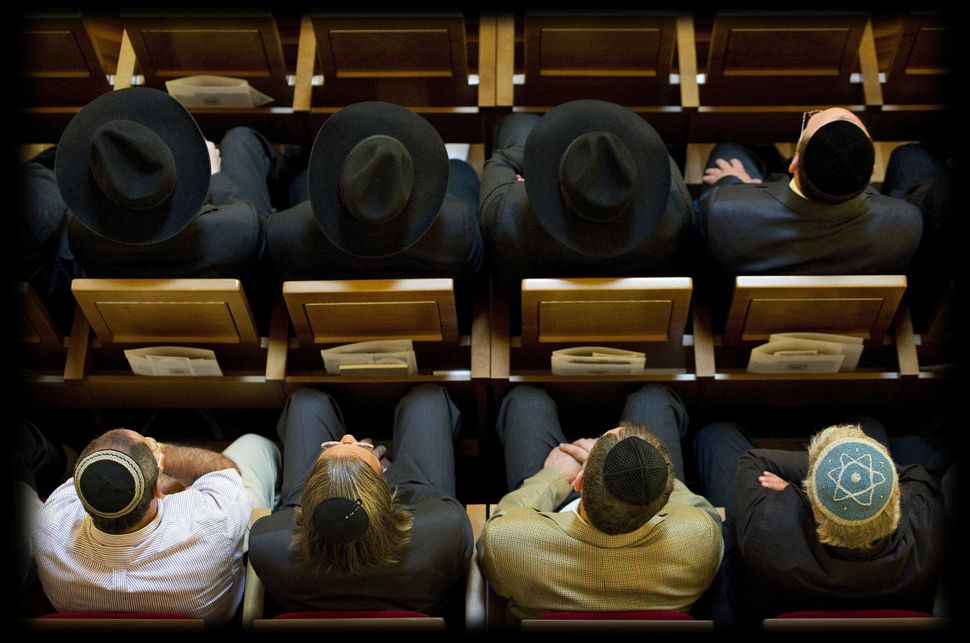 During this year’s High Holidays I observed that nobody at our Chabad House’s Rosh Hashanah and Yom Kippur services was Orthodox. Of course, my family and I are very observant; we keep and teach a strict adherence to halacha — Jewish law according to the Orthodox tradition — and everything that it entails. But nobody else that participates in our Chabad House’s services or our other programs considers themselves Orthodox. Our congregation is made up of non-Orthodox Jews who come to a service recited almost entirely in Hebrew (with some sporadic English), where men and women sit separately, and all the commentary and talks given by the rabbi are based on ancient texts.

It’s true that in some communities, Chabad caters to a more religious core. But that is certainly not the norm, especially in small towns like ours.

On a typical Shabbat in our Chabad House, nearly everyone drove to get there and is either intermarried or has someone in their family that is.

Why? Why do several dozen Jews, and in larger cities perhaps several hundred, choose to attend services at Chabad, when the temples and synagogues around the corner offer a much more contemporary experience, complete with musical accompaniment and mixed-gender seating? Why come to a service that doesn’t reflect the denomination they would probably identify themselves as?

I think the answer lies in the fact that Jews today are becoming less bound by the need to be denominational. It’s well known that millennials don’t like labels, but in my experience, even older Jews seem turned off by the idea of defining themselves by a specific denomination.

This is something Chabad fervently believes, too.

To put it bluntly, a Jew should not be defined by where he or she pays membership dues, and this is where Chabad’s success lies. We don’t label Jews based on how religious they are or by what they do or don’t do; we encourage Jews, based on who they are as individuals, to live a more committed Jewish life.

Chabad’s philosophy is that the future of Judaism and the continuity of the Jewish community depends on every individual Jew. This isn’t accomplished by belonging to one congregation or another; it is about making strides in your own personal Judaism. It’s about recognizing the potential within every Jew to connect and to consistently grow that connection.

That’s why, when a Chabad kid approaches someone in the street with tefillin or a lulav or Shabbat candles, the question is not “Are you Orthodox?” but “Are you Jewish?”

Because if you’re Jewish, then Chabad believes that you can play a role in the future of the Jewish people.

Jews living in the religious enclaves of New York and Chicago or elsewhere perhaps don’t need to worry much about their future. Their large families and the strict adherence to Jewish law will almost certainly guarantee that there is a future to their Judaism. But what about the suburban and rural Jews, or the Jews that live in cities with little in the way of Jewish infrastructure, the ones that for whatever reason do not live a fully observant Jewish lifestyle?

Is there a future in Judaism for these Jews who might not want to be labeled as belonging to a specific congregation, or feel limited by what that denomination offers?

Chabad says yes! By simply making Judaism part of your life and constantly searching for ways to do more as a Jew, that’s how your Judaism will have a future.

Starting in the 1950s, the Lubavitcher Rebbe sent shluchim, emissaries, to cities and countries around the world. The purpose for sending these young emissaries was not to compete with the local Jewish establishment, but to ensure that there is a future for these communities.

The Rebbe did not believe in labels for Jews and that is precisely what he taught us. Judaism belongs to all Jews regardless of how observant they are, and non-Orthodox Jews feel at home at Chabad because this is will always be our attitude.

Every Jew is considered family at Chabad and is never judged for what he or she does or doesn’t do. Our focus is the future of Judaism and the Jewish community, and the small steps it will take to ensure that.

I like to joke that of all the congregations in our town, Chabad has the largest percentage of High Holiday worshippers returning for a regular Shabbat during the year. True, this is primarily because our numbers are smaller to begin with, but it does say something about the people that attend Chabad.

Looking around my small High Holidays minyan, I noticed a man that last year only attended Kol Nidrei and then said that it was “way over his head,” but he recently started putting on tefillin several times a week. There was a family who decided that they would attempt to walk to shul as often as possible instead of driving. And a woman who at great personal cost closed her budding business for Yom Kippur despite it being in middle of the week at a busy time of the year. There were a handful of people who over the last several years have only been buying kosher meat, even if their kitchens at home aren’t entirely kosher yet; and one person who was working on improving his relationships with others.

Jewish continuity was sitting right there in front of me. The smallest commitment that a single Jew makes goes a long way towards ensuring that Judaism will remain alive for at least another generation. It is why we live far from family and friends, it is why our children travel for hours to get to school every day. It’s why Chabad services tourists in Kathmandu and students in Missouri and families in towns like mine.

Because Jewish continuity is all about the small things and we are here to make that happen.

So whether it’s the good food or the informative talks and lectures, or the always smiling faces and casual easy-going environment, or any other reason, whatever it is that initially brings someone into Chabad, they return because they recognize that every Jew can be part of the future.

Rabbi Eliezer Zalmanov is co-director, along with his wife Chanie, of Chabad of Northwest Indiana. He is also a member of Chabad.org’s Ask the Rabbi and social media teams.