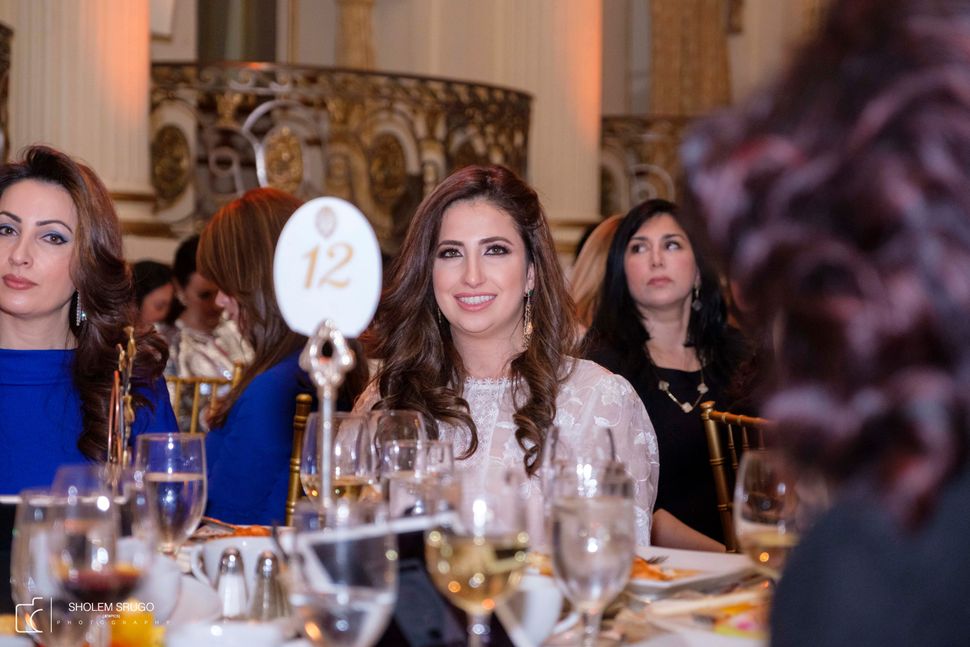 Forward Fashion writer Michelle Honig and Forward pop culture writer Jenny Singer attended the Batsheva Women’s Gala, the inaugural event for the Jewish women’s empowerment organization, together recently. One woman attended because of her fascination with modest dress and Orthodox woman entrepreneurship, and the other because of her lifelong dedication to spending time in the Plaza Hotel. Below is their reflection on the event, from ‘Lean In’ feminism to pareve desserts, to Michelle’s secrets for spotting wigs.

Jenny: If I had a dollar for every time a speaker at the Batsheva Women’s Gala said the phrase “women’s intuition,” I would still not have enough dollars to buy one of the sequin-encrusted gowns worn by the women who shared the grand ballroom at the Plaza on Sunday.

But I would have a lot more money than I have now. Same for “eishet chayil.”

Michelle: Everyone was well-dressed, especially the emcee, Liz Kennedy, who wore a gown with a very high slit and threw a jacket across her shoulders like she was a fashion blogger or a celebrity. Gorgeous.

Michelle: I wear a wig, so I can teach you my wigspotting ways.

Jenny: I would be honored.

Michelle: The trick is to see if a small amount of hair of a different color is exposed at the front.

Jenny: Thank you, I will cherish that knowledge.

This was the first event of Batsheva, a brand new group that aims to bring together powerful religious Jewish women, in part for community, in part for networking. It’s like live “Lean In” for Orthodox career women, no?

Michelle: I mean, that’s ostensibly what the organization is about. Although I don’t really see how it’s accomplishing that since most of the women honored appear to come from privileged backgrounds. Sure, they’ve accomplished some great things, but it wasn’t as if the barrier for entry was that difficult for them, so I don’t see how this was supposed to inspire women.

So the organization was founded by Sarah Rotenstreich, director of Chabad Preschool of the Arts, whose husband Naftali Rotenstreich is the Rabbi of Chabad of Gramercy Park. Rotenstreich named it for her mother-in-law. The event was structured around honoring fabulous women, with several speeches, a panel, and finally a fashion show. Who stood out to you?

Jenny: First of all, no one was eating the snacks at my table and I wanted to eat them but it felt like there was no socially appropriate way.

Michelle: No wonder everyone is so thin.

Contrast, don’t compare / Proud to be honored amongst powerhouse #womensupportingwomen in our Jewish community @thebatshevaorganization. Killed it @excessoriesexpert ?‍♀️ #blessed

Jenny: I found every woman who spoke inspiring and quite scary. Particularly Gila Gamliel, the Likkud MK who is Israel’s first-ever Minister for Social Equality, was like a rock star. She spoke about how “helping create a more equal society in Israel will help create a better land for us all” and about her plan to make every government office in Israel present a budget where they have to show that they’re allocating equal money to women.

Michelle: It was interesting that she called Chabad, “the first and most amazing social startup in the world.”

Jenny: The Israeli Minister of Social Equality screaming “We must have zero tolerance for sexual predators and we are sending a message loud and clear: WE WILL ROUT THEM OUT FROM OUR SOCIETY” while a room of Jewish women cheered was, frankly, the highlight of my young life.

Michelle: Really? I was rolling my eyes at her conviction that such a utopia could exist.

Jenny: I will join any army that woman starts. I can only pray that it is a violent army.

Michelle: Jenny, we talked about this: You’re a heterosexual female. You can’t just kill all the men. I loved that she didn’t ever pause for applause — she was not there to be applauded for! And that she’s pretty casually dressed in such a fancy room. This is a woman who suffers no fools.

Jenny: She spoke about Golda Meir as an example of Israel’s exceptional egalitarianism. Always with the Golda Meir! God love Golda, but we have to stop coasting off a gender equality success from five decades ago.

Michelle: True, she is an anomaly.

Jenny: Did you notice that Gamliel got from rooting rapists out of workplace to theorizing that Israel will one day be able to predict and avoid all heart attacks? Ah, who cares. I vote for her for everything.

Michelle: I liked Gamliel best as well. She was definitely the most down to earth of all the speakers — everyone was so fancy. But, as a major-league “Fauda” fan, I was kind of freaking that they got Rona-Lee Shim’on. She’s so goddamn gorgeous and so ELOQUENT.

Jenny: Nancy Brinker, founder of the Susan G. Komen Foundation, was also a phenomenal speaker. Did you notice that the music underscoring everything was very Hans-Zimmer-does-Klezmer. I dug it. Did you think the desserts were pareve?

Jenny: But they served fish! One day I will understand.

Michelle: I mean, maybe the chocolate wasn’t pareve. But I got major pareve vibe from at least one dessert.

Kim Heyman, who emceed the fashion show, is hilarious.

Jenny: She was outrageous and so was that fashion show, in the very best way. All these hot, expressionless, pleasantly racially diverse women, and some of them were wearing leather fanny packs! What a gift.

Michelle: I thought people were going to start a mosh pit.

So it was two designers: Ella Levy and Tamara Salem. The clothes were, overall, really nice. Very professional-looking, classic pieces. But I just found the work to be a bit uneven — there were some weird pieces. Like that balloon skirt, which I think was Tamara Salem? I don’t know, it felt dated almost. 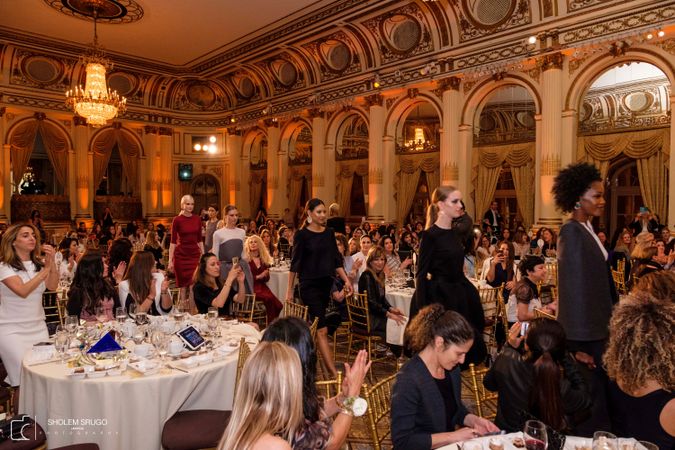 Fashion show at the Batsheva Gala. Photo by Sholem Srugo. Image by Courtesy of Batsheva Org.

Jenny: Bottom line — the Batsheva Organization is clearly committed to creating a network of high-powered Jewish women professionals while cultivating an elegant aesthetic.

As a woman who would like to join a bloodthirsty army that routs out rapists, I suppose I’m excited by this. As a scruffy journalist-type, I’m not sure why I should get up and cheer about rich people getting richer, just because they’re women. In one video they showed, a woman whose name I didn’t catch said, “People always ask me, ‘Would you like to see more women in leadership roles?’ Yes! But I would like to see more good women in leadership roles.” That summed up the problem and the solution for me.

The speakers were valuable, the scene was fascinating, and time will tell if the organization defines itself beyond generally encouraging women to make lots of money and reorder the world while keeping traditional Jewish homes. There’s not enough pareve dessert in the world for me to be conned into trying to have it all.

Michelle: The vibe was super inspirational. And even though I’m a natural cynic and am susceptible to criticizing anybody and everybody, I felt gently bewitched by the end of the program. And I hate these kinds of things, where people get dressed up to listen to people make long, boring speeches to accept awards. But I actually enjoyed myself. I even walked out feeling like I too could be some sort of wonder woman who could achieve it all. But then I remembered that I was supposed to come out feeling inspired, so I quickly got over myself.

Jenny: It’s important for our readers to know that after we left the Plaza and walked about halfway across the bottom of Central Park in heels, Michelle announced, “This is just like when my husband ran the marathon.”

Michelle: I can’t help that I’m proud of his accomplishments! Also mine — for schlepping two kids in the rain to various points across the five boroughs to cheer him on. Where’s my Batsheva award?