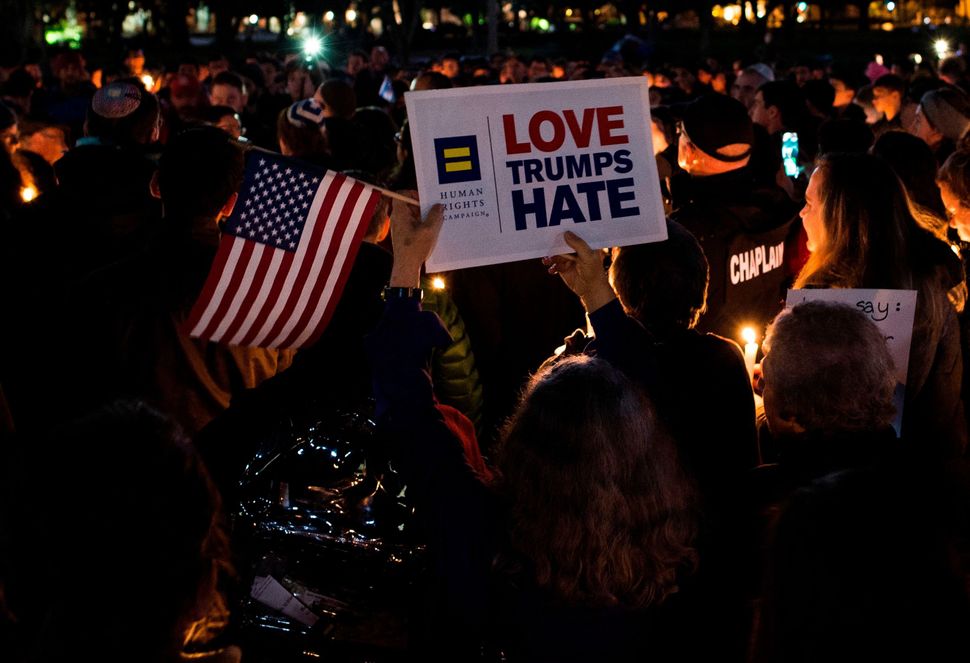 Yesterday, a man angrily posted on his social media account, “I can’t sit by and watch my people slaughtered. Screw your optics, I’m going in.”

And then he walked into a synagogue and killed 11 Jews.

We already know what will happen now.

All of this, of course, is nonsense.

It is time that we, as Jews, and as a nation, finally accept one important truth: The biggest terrorist threat in America comes from right wing extremists.

This is not an opinion. This is a fact, and it’s been in the headlines so much that it’s shocking that most of mainstream America has had trouble coming to grips with it.

In other words, the horrific tragedy that happened yesterday was not an isolated incident, nor was it committed by a lone wolf. It is part of a pattern, and a growing tide of hate that threatens to engulf this country, and many innocent people in its wake.

And despite the bias based in hope that both America and many in the Jewish world cling to, Jews are at the center of this danger.

Anti-semitic incidents increased 57% between 2016 and 2017. There is little doubt that the number will have risen again in 2018.

In fact, this horrific attack was not the first such killing in 2018. In January, a young man who trained with neo-Nazis killed a young gay Jew for being gay and Jewish.

Of course, there was also the march in Charlottesville, Virginia where men yelled, “Jews will not replace us!” before one of them killed a demonstrator.

I am waiting to hear from the “both sides” world that I am inhuman for daring to bring politics into this.

I am waiting to hear from those rightfully scared of anti-Semitism on the left that anti-Semitism doesn’t know “sides” — it only knows hate.

Unfortunately, none of these stances have one ounce of worth in the face of the reality that is rising white nationalism in the United States. They do not mean a thing when we have a president who actively supports the extremists in his world by blaming the mainstream media when a right wing extremist sent bombs to those on the left… and to the mainstream media.

They do not mean a thing when Fox News and other right wing outlets become the home of conspiracy theories, including the anti-Semitic conspiracy that George Soros secretly controls the American government.

And they do not mean a thing when all of these realities converge on a Shabbat where a baby is being held by his loving family for a Jewish ritual, and a mad man walks in and kills eleven Jews in cold blood.

In other words, as pundits, leaders, and others wring their hands over what side to take, over the widening partisan shift in America, and over buzzwords like “echo chambers,” right-wing extremists have grown more extreme, aided by the extremist shift of the mainstream right.

In other words, all of this is political.

11 Jews are dead because of politics.

The man who killed those Jews killed them because of the same conspiracies shared by Fox News and Donald Trump. And as well-meaning people ask us to simply mourn during this time, to allow ourselves to cry, and to see beyond sides as we hold onto each other, we must remember that we no longer have enough time just to mourn.

Yes, we will mourn. But it is time to finally stand up, together, against the rise of hate on the right.

It is being nurtured by the man at the very top of our political system. It is being enabled by all those who have turned a blind eye to it well before Trump took office, as people like Dylann Roof walked into a black church and killed in much the same way that Robert Bowers did yesterday.

It is being empowered by those who, out of well-meaning fear, keep crying out for us to look at “both sides” as one side’s hate continues to rise exponentially.

So those of us blessed to not have been targeted in Pittsburgh cannot afford to simply mourn. We must speak out. We must demand change. We must refuse to allow this to become just another moment that is twisted into a non-political tragedy.

The only way to prevent these deaths is to become political.

So speak up. Vote. Take sides.

Our future depends on all of us politicizing these tragedies. They were always political. The only question is whether we accept it or not.

Elad Nehorai is the writer behind the blog Pop Chassid, the co-founder of the creative Jewish website Hevria, and one of the leaders of Torah Trumps Hate, a new Orthodox Jewish activist organization and community. He is a columnist for the Forward.