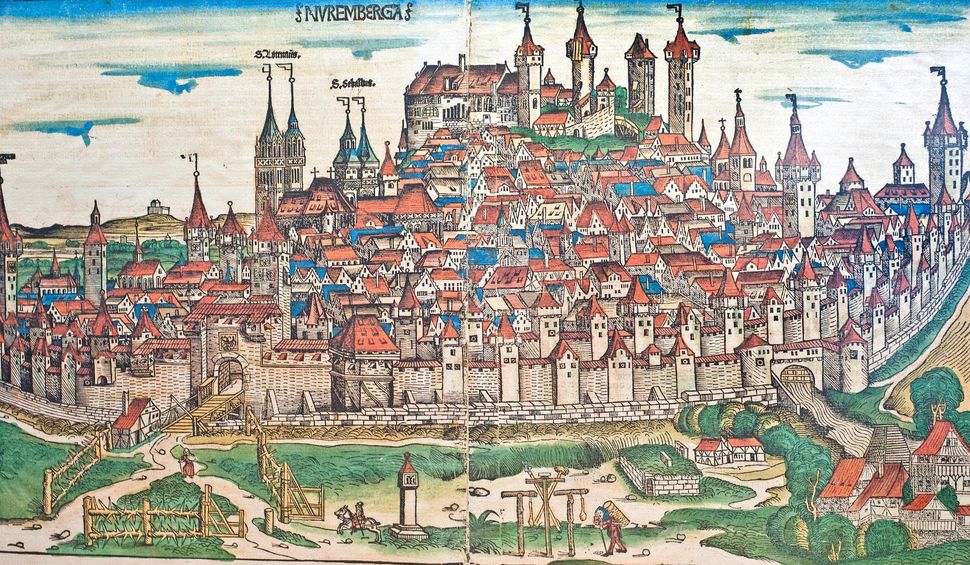 The question of how old Yiddish is has long preoccupied Yiddishists. And as it turns out, it’s a question that’s deeply connected to the nature of Yiddish as a language.

On the one hand, you have the Jewish-oriented approach, advocated by Max Weinreich, a 20th century Yiddishist, which sees in modern Yiddish an inheritor of a fusion language between Jewish languages and German. This view dates the inception of Yiddish back 1,000 years.

On the other hand, you have the Germanistic approach, which views Yiddish as a language that gradually developed with a basis in German. This view finds Yiddish to be much younger.

I believe the second analysis is correct. And yet, today, the most commonly held opinion about the age of Yiddish — the one you’ll find in Wikipedia, for example — is the one founded by Weinreich.

Weinreich is, by far, the most influential representative of a school of Yiddish studies that can be called “Jewish-oriented” because it addresses the development of languages spoken by Jews from a point of view internal to the community.

According to this approach, Jewish migrants to new territories would switch to a new vernacular, gradually abandoning their previous Jewish language and replacing it with a new one, also specifically Jewish.

This new Jewish language would be a fusion of elements from several linguistic sources: the everyday language spoken by local Gentiles; the language spoken by Jews before the migration; and languages on which the most important Jewish religious texts are written.

According to this model, Yiddish was born as a result of the fusion of three main sources: Romance vernacular languages like Old French and Old Italian, spoken by Jewish migrants from northern France and Italy; German dialects used by Christians who lived in the Rhineland; and Hebrew and Aramaic.

Thus, according to Weinreich, Yiddish is dated to when Jews arrived in Germany, around the 9th century. While we have no evidence about the language spoken by these Jews, we do know that at least during the 11th century, Jews were speaking a language with a German basis. The most striking evidence is provided by onomastics — the study of names. A large group of given names used by Jews from western Germany at that period were either borrowed from German Christians because of their attractive meanings or created by Jews from German words.

There are also German glosses in the writings of Rashi, the famous French Jewish religious scholar who had numerous family ties to the Rhineland.

In short, according to Weinreich’s model, Yiddish is over 1,000 years old.

But there’s another approach, the Germanistic approach, which sees in Yiddish a language developed from medieval German dialects. At the turn of the 20th century, the pioneers of scholarly Yiddish historical linguistics were all representatives of the Germanistic school. Unlike many before them, they understood that Yiddish was a not a corrupted form of German, due to numerous commonalities between modern Yiddish and medieval German dialects.

An anecdote by Harold Slutzkin of Petach Tikva illustrates this well:

During my school days [1940-45] a Buxton College in Derbyshire UK. our German master announced at the beginning of one term that as our studies had overtaken the curriculum we would dedicate that term’s German period to study Medieval German of which he had sufficient textbooks to distribute to the class. Imagine the amazement of the two or three Jewish boys in the class when it transpired that it was practically identical with what our grandparents and older members of our community spoke daily.

In his PhD work, prepared in Germany during the 1930s, one of the most important representatives of the Germanistic school, Jechiel Bin-Nun (Fischer) believed that German Jews upon arriving in Germany in the 9th century initially spoke a language that was essentially the same as that used by their Christian neighbors, and differed only by the presence of few specifically Jewish words.

Gradually, the number of these specifically Jewish elements grew, but the idiom spoken by Jews followed all the shifts that occurred within local dialects of German.

It was only in the 13th–14th centuries that a specifically Jewish language, Yiddish, arose, autonomous from German in its development.

In a book published in 1699, Christian Hebraist Johann Christoph Wagenseil wrote that Jews spoke a language that is not easily intelligible to German Christians. Other Christian authors from the 16th-17th centuries also regularly wrote about the “corruption” of German by Jews.

But even earlier — by the second part of the 15th century — we find Christian texts either mentioning a “Jewish” way of speaking or applying the label “Jewish” to the vernacular idiom used by German Jews.

Relying on these direct testimonies, it seems that by the 15th century Yiddish was alive and well.

Thus, the ages of Yiddish determined according to the two scholarly approaches described above, those by Bin-Nun and Weinreich, differ by four or five centuries.

The difference is partly related to the fact that the two authors do not use the same definition of the term “Yiddish.” But the issue is not purely terminological. It’s also due to the major, substantive and dramatic differences in their models of the linguistic inception and development of Yiddish.

Here’s why I think Bin Nun is closer to the truth. There is no linguistic unity in Jewish sources written before the 16th century. Overall, the language of different Jewish communities had the same dialectal peculiarities as the German dialects spoken by their Christian neighbors.

Put simply, the main available Ashkenazic sources from the 13th-15th correspond to different German dialects. During that period, we do not find any unambiguous evidence of Jews mixing various German dialects, or of a fusion of German, Hebrew, or Romance elements.

Moreover, Jews were talking like their neighbors. There is no evidence that Jews were holding tight to archaic German parts of speech, or not following the changes that were taking place in the everyday tongues of their Christian neighbors.

These documents are not necessarily representative of the everyday speech of Ashkenazic communities; their linguistic peculiarities can be individual, or related to the author or the scribe of these sources. But these texts were not based on the original Christian models. And they were written for internal Jewish use only.

And when it comes to sources from the 16th-17th centuries, the situation is dramatically different. On the one hand, they show idioms structurally different from any German dialect of their time. On the other hand, they clearly fall into two groups: western (from northern Italy and western Germany) and eastern (from the Czech lands and Poland).

Inside each group, sources show numerous similarities. However, linguistic differences between the two groups are important: they clearly had different German dialects as primary donors. Both groups include numerous shared examples of fusion of elements coming from various linguistic components.

As the German linguist Erika Timm demonstrated, a large portion of these pan-Ashkenazic elements, present at least since the 14th century, were mainly due to the tradition of Yiddish translations of the biblical text that were studied in all Ashkenazic elementary schools.

To my mind, the evidence suggests that the most plausible period in which we can say that Yiddish emerged as a fundamentally autonomous language, different enough from German dialects to be considered its own language, was the 15th century.

This means that according to the information available to us today, mainly made available only after Weinreich’s death, his theory that Yiddish is over a thousand years old is off by a half a millennium.

Of course, Weinreich’s model and the age of Yiddish that follows directly from it represent only one part of his contribution to Yiddish studies. Many of his other findings remain valid, even revolutionary. The Jewish-oriented approach elaborated by Weinreich allowed him and his followers to successfully address major parts of Yiddish history that were invisible in the Germanistic approach. For example, he was certainly right about West Germany being the cradle of numerous linguistic innovations that spread gradually to all Ashkenazic communities in various parts of Europe.

But Yiddish is much younger than he thought.