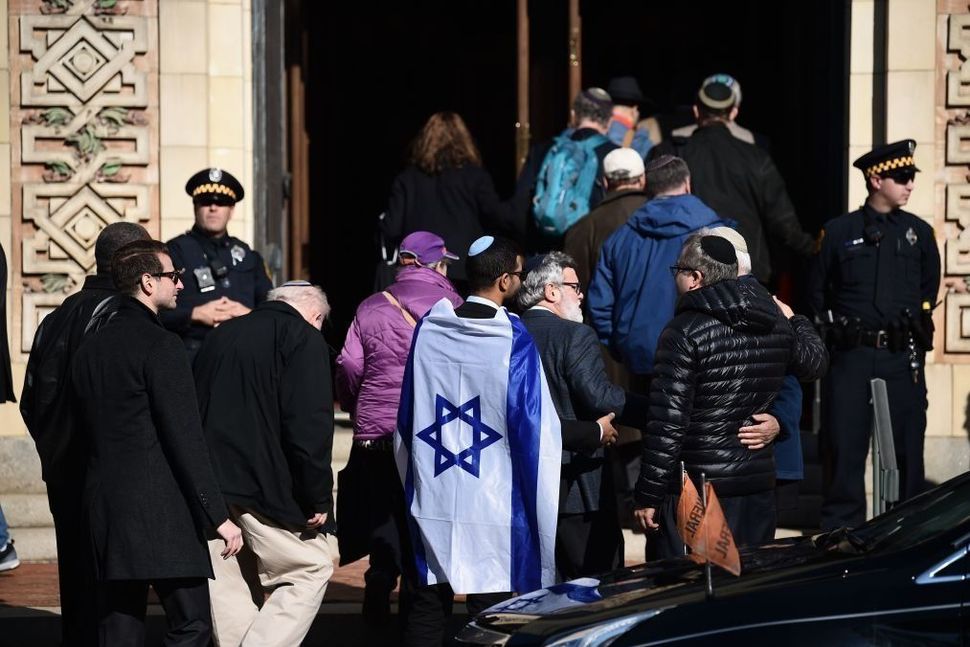 For anyone serious about fighting anti-Semitism, the aftermath of the Pittsburgh shooting that left 11 Jews dead last month was utterly dispiriting. Too many who rushed to comment seemed all too eager to express not only shock and grief about the murder, but to take this opportunity to tout partisan political views.

On the left, many blamed white nationalism and President Trump, their longtime bête noir. Meanwhile on the right, many called out left wing anti-Semitism while defending Trump – a move the left called whataboutism. The true threat comes only from the right wing anti-Semites, they insisted.

But it wasn’t whataboutism. Indeed, a deep dive into the archived social media posts of the Pittsburgh shooter Robert Bowers reveals not only how inappropriate was this partisanship, but also how artificial the divide between anti-Semitism on the left and the right is.

Even though the archive captures only a few dozen posts from the weeks before the murderous attack, it provides a frightening glimpse of how the vicious libels that have fueled Jew-hatred for centuries are easily recycled and updated for the 21st century.

More shockingly, while there is a lot of the kind of stunningly vile neo-Nazi material one would expect, some of the posts shared by the shooter include themes that are also popular among anti-Israel activists who see themselves as staunch leftists.

Take, for example, a post that shows a white man looking at a desolate scenery of ruins, thinking to himself “Hitler was right … But we don’t listen.” And at the bottom of the image, we find the punch line:

“If Whites don’t stand up NOW and stop ALL immigration & Multiculturalism and SPEAK OUT, then the entire planet will become 3RD WORLD and only the Jews will have a prosperous safe country while the entire planet is burning.”

This post ingeniously incorporates the founding mythos of white nationalism – that Jews are perpetrating a white genocide – with the typical left-wing belief that the Jewish state is the great misfortune of the 20th century.

The notion that “Jews will have a prosperous safe country” is the far-right’s version of the kind of anti-Israel propaganda popular on the far-left, where the Jewish state is depicted as an aggressive and racist apartheid state sustained by ruthless military power and discrimination against non-Jews.

To be sure, the far-right may view these accusations more as compliments. But ultimately both the far-right and the far-left regard Israel as the embodiment of an evil particularism that brings suffering and destruction to non-Jews.

Unsurprisingly, the far-right and the far-left are also similarly opposed to the alliance between Israel and the US. A post shared by the shooter about a week before the attack laments this alliance.

“Who coined the phrase ‘Israel are our greatest allies….?’ No they’re not. They’re nobody’s ally. When have they ever helped anyone but themselves? We give them Jerusalem, they give us ISIS. We give them Israel in 1948, they give us sabotage, terror, anti-Christianity and economic theft. Burn.”

The idea that Israel should somehow be associated with the Islamist terror group ISIS originated with anti-Israel activist Max Blumenthal, whose writings about the hated Jewish state on far-left “anti-Zionist” sites were enthusiastically embraced on all major far-right sites, too.

Blumenthal’s popularity in these circles was also noted in the wake of deadly shootings targeting Jewish institutions in Overland Park, Kansas, in 2014.

Blumenthal’s efforts to tar Israel with the atrocities of ISIS were given the meme treatment, and the resulting image showing a man with a black ISIS mask pulling off a Netanyahu likeness became fairly popular both among far-left and far-right Jew-haters.

.@RaniaKhalek ISIL and the Jewish State in Israel and the Levant (JSIL) both behead innocents. ISIL with daggers, JSIL with drones.

Again and again it proves irresistible for Jew-haters of all political and religious persuasions to associate Jews and the Jewish state with a spectacular present-day evil like ISIS.

This, too, is evident in a post that Bowers shared with the comment, “just one more item on the long list of the things that eventually make the white kids führerious” – “führerious” apparently meant as a combination of Hitler’s German title “Führer”, and the word furious.

The original post came from an account adorned with Nazi symbols; the text reads: “ISIS is jews!” “This is jewish Ritual Murder that jews deny!” “Also known as Blood Libel!”

The post included a fabricated image showing a naked young woman with her throat slit and her blood draining into a bowl, with an accompanying explanation: The crime was falsely blamed on Islamists because people failed to realize that Jews were actually behind the terror group ISIS, directing it to collect the blood of “this hapless Christian Girl.”

The source of this image appears to be a slide presentation on “ISIS – THE HIDDEN TRUTH” created across the world, by an apparently rather successful and rather anti-Semitic Pakistani accounting professional in July 2015. The statistics tab for the slideshow indicates that it garnered 4690 views and 128 downloads.

In a perfect illustration of the global virulence of Jew-hatred, Robert Bowers, an American white nationalist, shared a slide created by a Muslim anti-Semite in Pakistan.

Another noteworthy example is the shared disdain for Canary Mission, the anonymous group that monitors anti-Israel activism and anti-Semitism that is greatly reviled on the left.

But as a post shared by the Pittsburgh shooter shows, neo-Nazis take a similarly dim view of Canary Mission.

The post links to a site that advertises its raw racism already with its name: “Diversity Macht Frei” – a breathtakingly cynical adaption of the notorious Nazi slogan “Arbeit macht frei”, i.e. work sets you free, which was part of the main entrance gate to Auschwitz. Unsurprisingly, posts from this obscene site are often cross-posted on the neo-Nazi site “Daily Stormer.”

The far-right take on Canary Mission seems almost exclusively based on what the post’s author praised as “the leftist, pro-Palestinian website Electronic Intifada, which publishes a lot of good research on the Jews, if you can ignore their disturbing sympathy for brown people.”

Quite obviously, neo-Nazis have no problem understanding what is meant when the far-left rails against Israel or Zionists.

It sometimes seems that those who promote anti-Semitism are much more united than those who fight it.

Looking at this toxic mix of far-right and far-left bigotry should serve as an important reminder that those who want to fight contemporary manifestations of the oldest racism do their cause a disservice if they point fingers only in one direction.