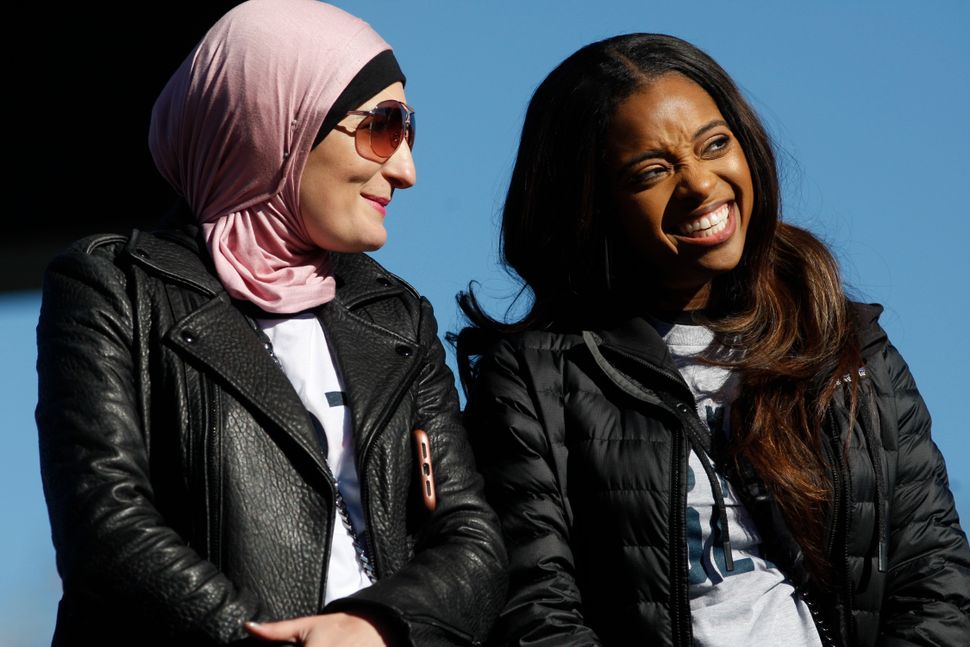 But something has happened as the mainstream media started to cover the Women’s March’s failures vis-à-vis the Jewish community and call for the leaders to resign: An undeniable element of racism has seeped in to the discourse.

And yet, the sheer amount of racism and Islamophobia that defines much of the criticism against Linda Sarsour, a Palestinian Muslim activist, Tamika Mallory, a black gun control activist, and Carmen Perez, a Latina activist, has become more toxic and harmful than the actions that spurred the protests.

The racism against the leaders of the Women’s March is everywhere. It is commonplace to hear Sarsour decried for “supporting Sharia law” simply because she is a Muslim. Many others in the Jewish community think it’s funny to insult Sarsour by referring to her as a “cockroach,” which is what Sarsour’s last name means in Arabic. I have heard people mock Mallory in solidly racist terms, calling her “classless” and “aggressive,” or accusing the Women’s March leaders of trying to organize a “Jerry Springer-like public debate brawl,” a description mired in anti-blackness.

After hiring a PR firm to make a disastrous attempt to muzzle journalists tweeting about a @tabletmag story that is critical of them, the leaders of @WomensMarch are trying convene a Jerry Springer-like public debate-brawl… with the sources cited in the story. pic.twitter.com/1A3vl5ECdo

This tsunami of racist invective and abuse hurled at the movement’s leaders has simply overtaken the mistakes these leaders made in the first place.

And the greatest harm has been to Jewish women of color — especially black Jewish women — who have been put in an impossible position.

This has happened to me before. As a black Jew, Louis Farrakhan is my enemy. And yet, an article I wrote about this has been used by people on the right to tar all people of color. I regret writing it.

Similarly, I regret the ways that I may have previously contributed to the harm against the leaders of the Women’s March, despite being aware of their flaws. Because these criticisms inevitably get used in racist ways.

I am livid at the women who put me in this position.

It is unforgivable for a movement mostly led by white women to use intersectionality as a means to silence and force black women to resign from positions of leadership, flawed though they may be. At the end of the day, the intersectional theory is not there to help white women replace black women and Muslim women and Latinx women from positions of leadership. And that is exactly how it is being used in the criticism of the Women’s March.

I know qualified and brilliant black women who have complicated relationships with Farrakhan, who need education on anti-Semitism. But they’ve been willing to accept that education and that criticism from me because I delivered it with love, compassion, and understanding.

They know they will not get that from many of critics of the Women’s March leaders.

As arguably the most visible Muslim Palestinian activist in the world right now, Linda Sarsour has always experienced an astonishingly high amount of death threats, death threats which increased after she was falsely accused of stealing money that she helped raise for the victims of the Pittsburgh shooting.

She didn’t steal that money, and she doesn’t deserve these threats of violence. She doesn’t deserve to live in fear for herself and her children. And watching her go through this will make other Muslim women, especially Palestinian women, less willing to be leaders in social justice movements.

And we need them.

Intersectionality is not meant to justify creating an environment that leads to increased violence towards America’s most vulnerable groups. Intersectionality is about understanding power relations, and considering and prioritizing the people in our society who have the least amount of power.

The opposition to Sarsour and Mallory did not take that into consideration. And now we’re left with distrust and ashes.

In response to the backlash against them, the Women’s March has included Jewish women in their Unity Principles, along with Latinx women and Asian/Pacific Islander women, who were also previously excluded from the list.

I still don’t feel safe or included in the Women’s March, along with many other white and non-white Jewish women. It doesn’t feel sufficient.

But now, I wouldn’t feel comfortable working with or even socializing with most the Women’s March’s critics.

And I’m not alone. Many Jewish women of color I speak feel even more alienated from their Jewish communities because of this.

Jewish women weren’t originally included in the Unity Principles, it’s true. But in the fight to get them there, one thing became clear to me: In the ranks of those criticizing the Women’s March and tearing down its leaders, you won’t find true intersectional feminists. And you won’t find me.