Howard Schultz Is A Tone-Deaf Billionaire Who Thinks He Should Be President. Sound Familiar? 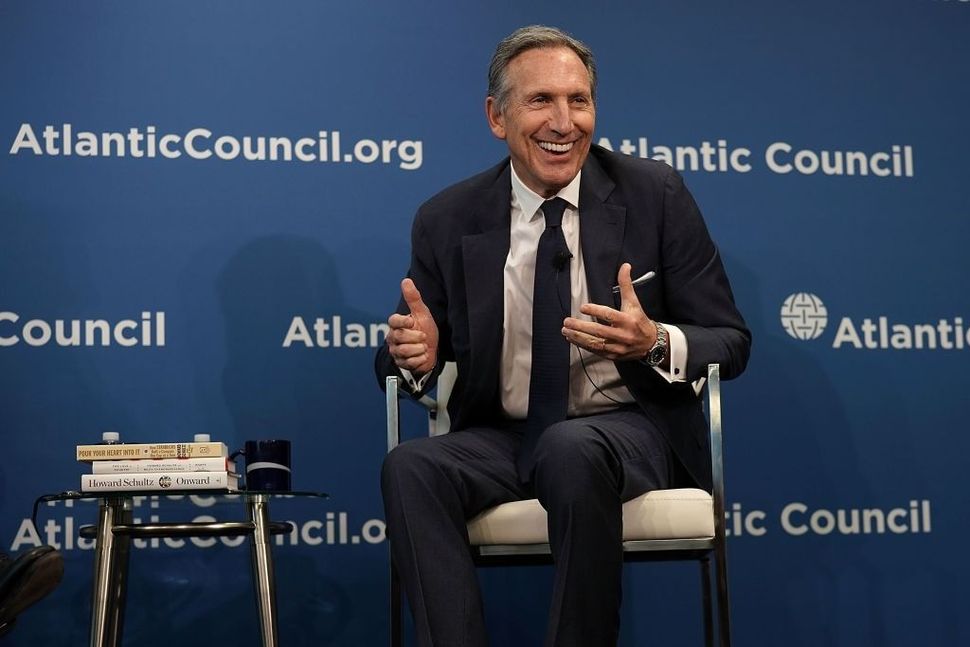 Starbucks Chairman Howard Schultz Discusses Role Of Public Global Companies WASHINGTON, DC – MAY 10: Executive Chairman of Starbucks Corporation Howard Schultz participates in a discussion at the Atlantic Council May 10, 2018 in Washington, DC. The Atlantic Council held a discussion on ‘The Role of a Global Public Company.’ (Photo by Alex Wong/Getty Images) Image by Getty Images

As America is held hostage by a “businessman president” who recently reopened the government after a 35 day temper tantrum that cost the American tax payers billions of dollars, another American businessman has emerged from the fray.

Howard Schultz, CEO of Starbucks, has got a bold new notion that our system is broken and he alone can fix it. Or as he put it on Twitter, “I am seriously considering running for president as a centrist independent.”

If this feels somehow familiar, it’s because it is. President Trump also ran on exactly the same premise — that our political system was broken, both parties were bad, and he alone could fix things. Trump said a bold new step was needed, and that bold new step was a reality television host who paints himself the color of 1970s appliances.

As we all know by now, it didn’t go very well. Trump’s approval rating hovers at 39.7%.

It would seem that a businessman who “alone can fix it” was not quite what the U.S. needed in a President.

Maybe that’s why yesterday was no picnic for Schultz.

His tone-deaf announcement was soundly mocked as soon as it went up on Twitter.

And that was before he exposed the American people to his actual opinions on 60 Minutes.

There he disclosed his idea that the national debt is a real problem, and that Democrats promising Medicare for all was the same as Trump’s wall.

Perhaps someone should have explained to the 65 year old billionaire that comparing a racist bugaboo of a wall to wanting to give people healthcare is not going to endear you to the base of the Democratic Party.

His 60 minutes interview managed to alienate both Democrats and Republicans, and probably Green Party voters as well.

He came off as both pedantic and endlessly schoolmarmish. The lithe billionaire coffee baron read like the bastard child of Al Gore without the charisma and Martin Van Buren without the cool hair. He talked around questions and generally made 61 year old Scott Pelley look fresh faced and energetic.

Even his fellow billionaires were not onboard. Mike Bloomberg, another billionaire who’s gotten elected to office, immediately smacked Schultz down, which should tell you something, since Bloomberg has been considering the question of a third party candidacy.

“Given the strong pull of partisanship and the realities of the electoral college system, there is no way an independent can win,” Bloomberg wrote in response to Schultz.

He’s not the only one to think so. “Any third-party candidate would face huge obstacles to securing a victory, including the overwhelming organizational advantages and voter loyalty enjoyed by the major parties, the winner-take-all nature of the Electoral College process and the lack of true centrists of the sort that the former mayor might hope to win over,” wrote Brendan Nyhan in 2016 in the New York Times, words that are even truer today.

It’s hard to imagine a worse time in American politics for a businessman candidate who is arguing that both parties are problematic. It’s possible that if Trump wasn’t such an epic disaster, you might be able to sell a Democratic Trump. But as is, the time for tone-deaf, narcissistic billionaires who think they can solve the country’s problems has surely passed.

Howard Schultz Is A Tone-Deaf Billionaire Who Thinks He Should Be President. Sound Familiar?