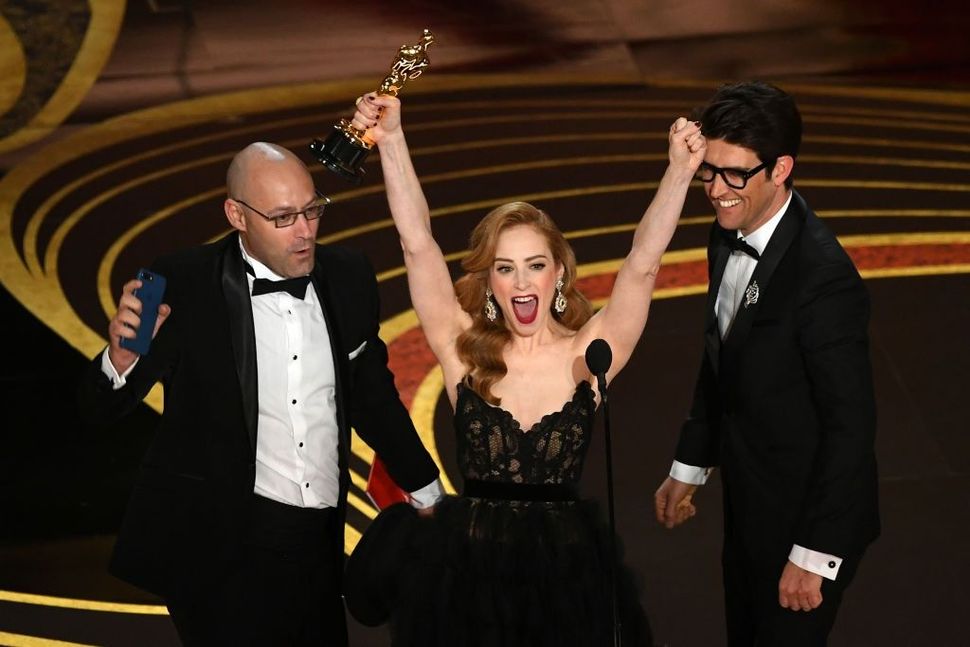 Listen, we can admit it — it was not the greatest week for Jewish news.

But in the course of this column let us convince you, dear Forward reader — it was also a Jewish week of miracles. Of kindness, hope, triumph, and bravery. These are the happy Jewish news stories you may have missed.

More Jews are becoming foster parents: The number of Jewish foster parents is increasing thanks to efforts by an Orthodox Rabbi, Ari Feldman reports for the Forward. Through Yatom, an organization created by Rabbi Shmuly Yanklowitz, Jewish families are trained and supported through the foster care process. Tamar Fox, who has fostered two children, as well as adopting a child, told the Forward, “That feeling, of we have to look out for people who are in danger, feels like a pretty deeply held Jewish value.”

Anti-Semitism in England gets pushback from powerful women: Two happy news stories for the Jews who are fighting against an onslaught of anti-Semitism in British politics — the UK Jewish Chronicle reports that Jewish women organized thousands to send letters of support to Jewish Member of Parliament Luciana Berger, who is due to give birth to her second child this weekend. Berger has been a staunch voice against anti-Semitism in British parliament for years, recently quitting the Labour Party in a stand against anti-Semitism. Supporters — including children, rabbis, and Holocaust survivors — wished to thank Berger for her work on behalf of Britain’s Jews, which they say has taken up her time and attention through this and her last pregnancy. In another hopeful story, fellow Member of Parliament Layla Moran spoke harshly against the wave of anti-Semitism in the British government and criticized Labour leader Jeremy Corbyn, and any who would use criticism of Israel as an excuse for anti-Jewish sentiment. “You don’t have to be pro-Palestinian and anti-Semitic,” said Moran, whose family is Palestinian. She added, “My plea to those who feel they need to step up for the Palestinians: Please do that, my God do we need it but also please don’t do it in a way that stokes anti-Semitism.”

After he was refused service at a Jerusalem pizza parlor for being gay, rabbinical student Sammy Kanter, with IRAC’s assistance, took the the pizza parlor to court, and and will be awarded 16,500 NIS (4,600 USD) in damages. Listen to what he had to say after the verdict. pic.twitter.com/JlZ7ifILWu

Justice and progress for LGBT people in Israel: In September 2018, Hebrew Union College rabbinical school student Sammy Kanter was told to leave a Jerusalem pizza shop when employees confirmed that the American student is gay. This week, Kanter won a lawsuit against the restaurant in Israeli court. Kanter will recieve $4,500 in damages from the pizza shop, Ben Yehuda 2, which he plans to donate to the Reform group the Israeli Religious Action Center, which helped him bring the suit, the Huffington Post reports. Kanter wrote on Facebook, “The outcome of the trial has made me realize that Israel offers me protections for being gay that even the United States doesn’t offer.” He went on, “I was proud to take the fight public to make sure business know this is not okay, and at the same time tell those who might be afraid to be who they are that it’s also celebrated in this land.”

Jewish Oscar representation was sensational: 2019 was a great and hilarious year for Jews at the Oscars, where we won, lost, imitated Lady Gaga, and performed alongside members of Queen. Our favorite moment was when husband and wife duo Israeli director Guy Nattiv and producer Jaime Ray Newman accepted the award for Best Live Action Short for “Skin,” a film about racism. “My grandparents are Holocaust survivors,” Nattiv said breathlessly, in between his wife’s literal shrieks of joy. “The bigotry that they experienced in the Holocaust, we see that everywhere today, in America, in Europe. This film is about education, about teaching your kids a better way.”

Major progress in the study of Crohn’s disease: Researchers announced major strides this week in understanding Crohn’s, an inflammatory bowel disease which is a genetic risk factor for Jews of Ashkenazi descent. A UK study, the largest ever to examine the failure of Crohn’s drugs to treat the disease for so many people, found that dosing is frequently too low and must be increasingly personalized for individual patients. Researchers believe that acting on these findings could alleviate symptoms and save money for many Crohn’s patients.

Finish Jews are having a Yiddish resurgence: And from the Yiddish Forverts, Finland’s Jews (there are about 1,500) are having a love affair with Yiddish, Rukhl Schaechter reports. Attending a Limud conference in Helsinki, Schaechter enjoyed an Estonian Yiddish jazz-duo, learned that most of Finland’s Jews are vegetarians, and immersed herself in a Jewish community that is rediscovering Yiddish.

Torah: In this week’s parsha, Vayakhel, the Israelites collectively donate so much finery to the building of the holy tabernacle that Moses has to ask them to stop. “Men and women, all whose hearts moved them, all who would make an elevation offering of gold to God, came bringing brooches, earrings, rings and pendants.”

How can we become that Jewish community, the one that gives so much, from so deep in our hearts, that we have to be asked to stop?