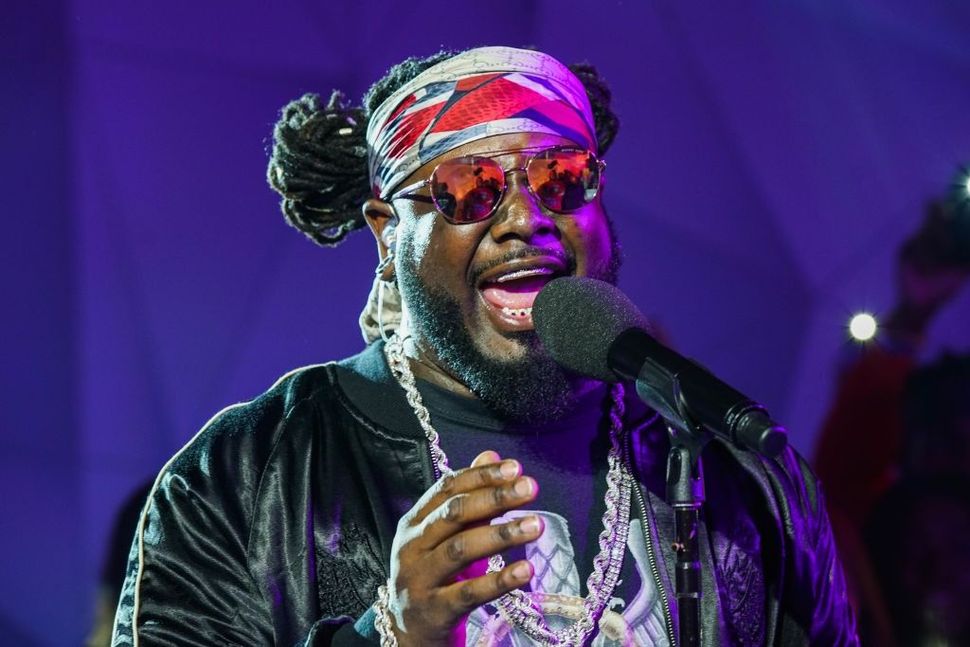 Pour one out for rapper T-Pain’s relationship with the national Jewish youth movement BBYO.

Teachers everywhere nodded in understanding this weekend, hearing that international rap and R&B phenomenon T-Pain walked off the stage before the end of his concert, unwilling to spend even one more minute attempting to entertain teenagers.

“Disrespectful,” the legendary rapper said of the youths, who threw glow sticks and a beach ball at his head as he performed.

A spokesperson for BBYO confirmed for the JTA, “Members of the audience did throw glow sticks at the beginning of the show and were asked not to. T-Pain left the stage after being hit by a beach ball.”

The concert, the JTA reports, drew over 2,000 teens, and took place in Denver at the BBYO International Convention, an annual gathering of BBYO chapters.

In a nearly 10-minute long explanation on Instagram captioned “beach ball context,” T-Pain, who is grieving for his recently deceased brother, explained that after 12 hours of travel and a room mix-up at the hotel, he rushed to the convention center to make it on time to the performance, unable to shower or brush his teeth. T-Pain had signed a no-alcohol contract with BBYO; moments before walking on stage, he was asked by staff to avoid cursing. “You know most of my songs, like — real dirty? Talking about strippers and alcohol in most of them,” he says he told the organizers. (For context, two of the Floridian’s biggest hits are titled “Buy U A Drank” and “I’m N Luv (Wit A Stripper)”.

Despite these factors, the Grammy winner said, “I [came] out super energetic,” but noticed that at least 80% of the crowd wasn’t listening. “I get that,” he reflected. “They’re high school kids. It’s not my demographic,” he said, adding that kids were going in and out of the venue, trying to chill, “Just like high schoolers do. That’s a normal thing.”

But after a barrage of objects, including several glow sticks and a frisbee hit him in the head, the performer got permission from his manager to pause the show. He says he told the teen audience, “Guys. I’m really trying to do a good show up here,” and asked them to stop throwing things at his head, sharing that he was dealing with the recent death of his brother. “Don’t throw anything at me please,” he recalls saying. “It makes me feel like you don’t give a f**k about what I’m doing up here. I know you don’t, but you don’t have to make me feel that way.”

Singing and rapping gamely in front of a swiveling menorah graphic just ten minutes before the show was scheduled to end, footage shows an audience member lobbing a plastic inflatable beach ball at T-Pain’s head. This was the final straw from an audience that exuded constant disrespect, T-Pain said.

Every parent, educator, rabbi, and babysitter has, one time or another, looked herself in the mirror after a particularly difficult interaction with teens, and said these exact words. It is a comfort to know that even the man who sings the lyrics “Shawty got class, oh behave!”

Hang in there, T! Don’t let the youths grind you down. We think he’ll be back to enjoying baggy sweatpants with the Reeboks with the straps before you know it.

Clarification, July 11, 2019: The original article erroneously stated that T-Pain learned of the no-alcohol policy immediately before performing; he in fact had signed a no-alcohol contract.