Fighting Anti-Semitism Isn’t Just About Jews. It Kills Non-Jews, Too. 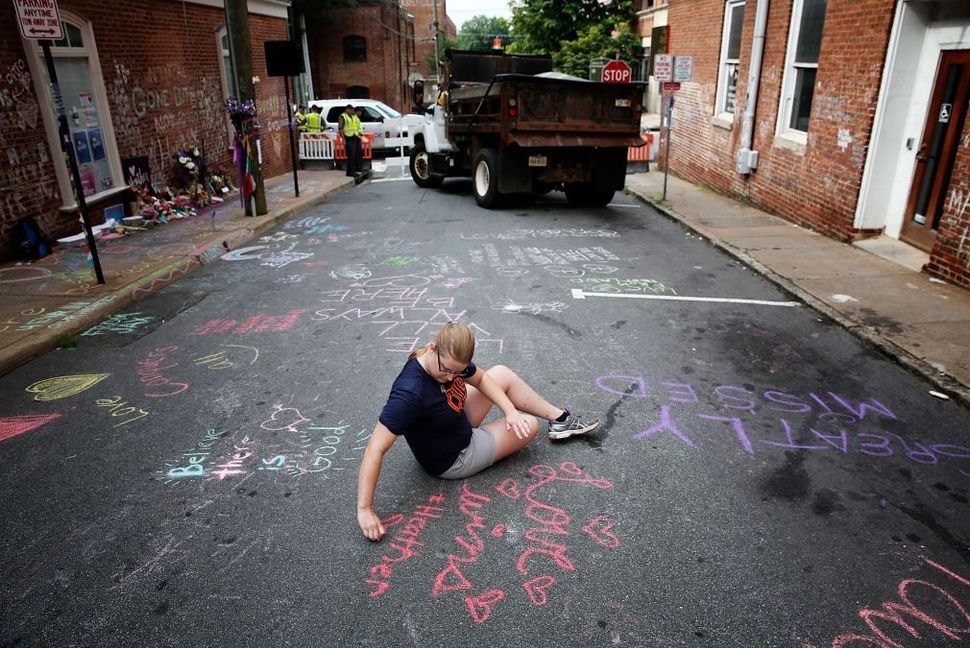 CHARLOTTESVILLE, VA – AUGUST 11: Kim Ganczak writes on the street with chalk near a makeshift memorial for Heather Heyer, who was killed one year ago tomorrow during a deadly clash, August 11, 2018 in Charlottesville, Virginia. Charlottesville has been declared in a state of emergency by Virginia Gov. Ralph Northam as the city braces for the one year anniversary of the deadly clash between white supremacist forces and counter protesters over the potential removal of Confederate statues of Robert E. Lee and Jackson. A ‘Unite the Right’ rally featuring some of the same groups is planned for tomorrow in Washington, DC. Image by Getty Images

Each of these forms of bias uproots lives, devastates families, and destroys dreams. They kill violently and they kill painfully. Most shockingly of all, they kill indiscriminately.

On April 13, 2014, three people were murdered outside the Jewish Community Center and a nearby retirement home in Overland Park, Kansas. The shooter, 73-year-old Frazier Glenn Miller of Aurora, Missouri, was the former leader of the defunct North Carolina-based White Patriot Party. Authorities reported that he shouted “Heil Hitler” multiple times during the shooting and later during his arrest. William Lewis Corporon and his grandson, Reat Griffin Underwood, both United Methodist Christians, and Terri LaManno, Catholic, were all the victims of anti-Semitism.

In 1964, James Chaney, Andrew Goodman, and Mickey Schwerner were murdered while working with the Freedom Summer campaign attempting to register African Americans in Mississippi to vote. Along with Chaney, an African American man from Meridian, Mississippi, Goodman and Schwerner, both white, Jewish men from New York City, were the victims of racism. 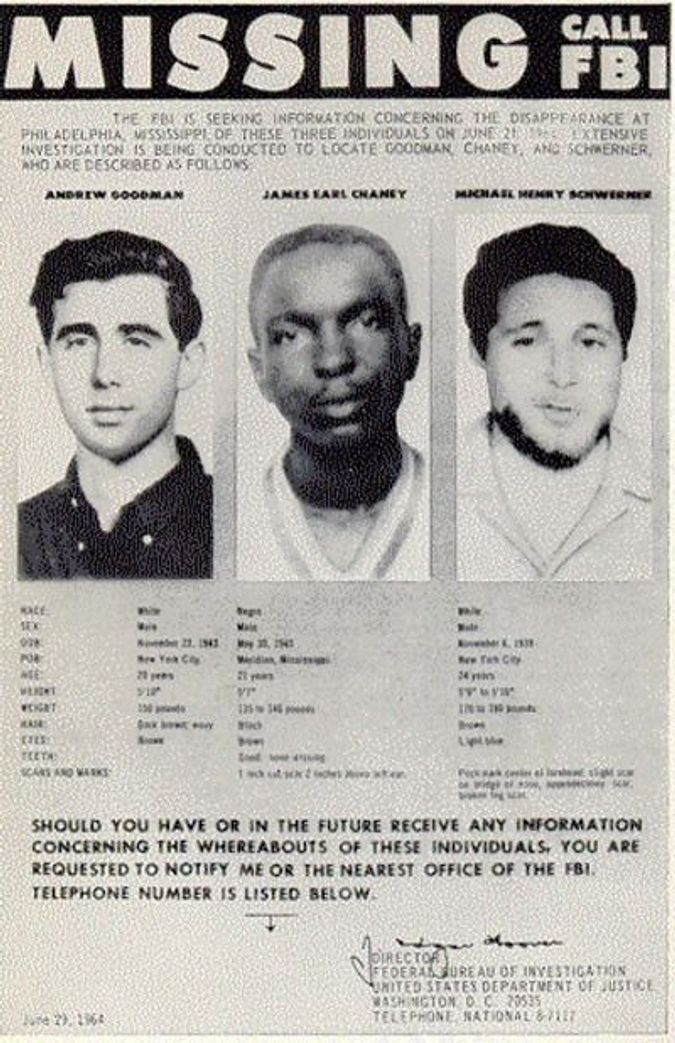 On September 15, 2001, days after the worst terror attack to take place on American soil left the country reeling, a Sikh-American gas station owner in Mesa, Arizona was murdered by 42-year-old Frank Silva Roque. This was the first of many assaults across the United States reported to be acts of retaliation after the terror attacks. Balbir Singh Sodhi, who wore a beard and a turban in accordance with his Sikh faith and was mistaken for an Arab Muslim, was the victim of Islamophobia.

On August 12, 2017, 20-year-old James Alex Fields, Jr. drove from Ohio to Charlottesville, Virginia to attend the Unite the Right rally in. He turned his car into a deadly weapon, deliberately accelerating into a crowd of people who had gathered to peacefully protest the rally, injuring 28 and killing one. Heather Heyer, a white woman, was the victim of white supremacy. 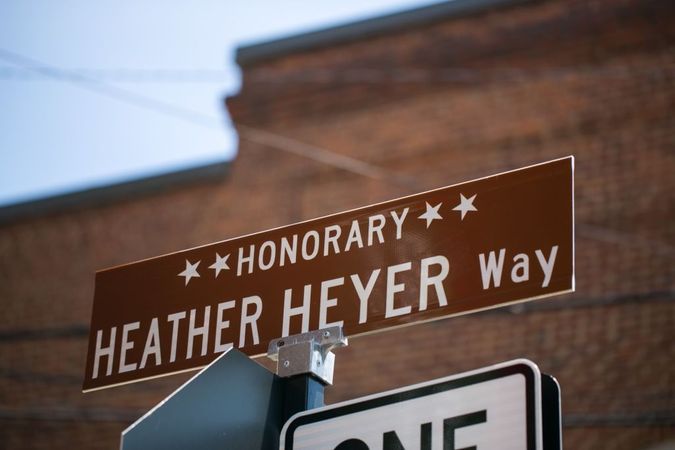 A street sign renamed in honor of Heather Heyer is seen August 10, 2018 in Charlottesville, Virginia, a year after she was killed while protesting a Unite the Right rally. - Virginia Governor Ralph Northam and the city of Charlottesville have declared a state of emergency ahead of the one-year anniversary of the violent white nationalist rally that killed Heather Heyer and left dozens injured. Image by Getty Images

Hate is not about the identity of the victims, but the motivation of the perpetrators. That hatred, once unleashed, knows no bounds. Like gun violence, like cancer, like heart disease— some of us may be statistically more likely to fall victim, but indeed, none of us are immune.

For much of our past, the Jewish community was forced to live apart from others, relegated to ghettos and often reliant on our own businesses. The United States has a long history of segregation that has remnants still today, preventing African Americans from attending the same schools, shopping in the same stores, and even owning houses alongside white Americans.

Public opinion in support of LGBTQ+ people has shifted rapidly only in recent years. As our marginalized communities have stepped out of the shadows and into the core of public discourse, we find ourselves converging in ways that we could not have imagined. The lines that once separated us are becoming increasingly blurry.

When faced with the daunting awareness that there are those who seek to harm, and even eradicate, those who are not like them, our instinct is often to turn inward, to follow our innate urge to seek self-preservation. Indeed, it is how we have survived. Yet, to deny that those who do not hold a specific identity cannot be the victim of a crime against those of that identity is to ignore the ways that our communal stories have changed. It is to erase a world where our communities intersect and overlap, where institutions built by one community provide service to and contribute to those outside of it, where allies from one community stand alongside and even in front of those who are being threatened.

Amidst the current nationwide debate about anti-Semitism and tireless attempts to define what does and does not constitute an act of anti-Semitism, and who can be a victim of anti-Semitism, let us never forget those outside of our Jewish community who lost their lives because of an overwhelming hostility and an insidious desire to kill us.

Because hatred threatens to kill us all.

Rori Picker Neiss serves as the Executive Director of the Jewish Community Relations Council of St Louis. Prior to that she was the Director of Programming, Education and Community Engagement at Bais Abraham Congregation, a Modern Orthodox Jewish synagogue in University City, MO.

Fighting Anti-Semitism Isn’t Just About Jews. It Kills Non-Jews, Too.