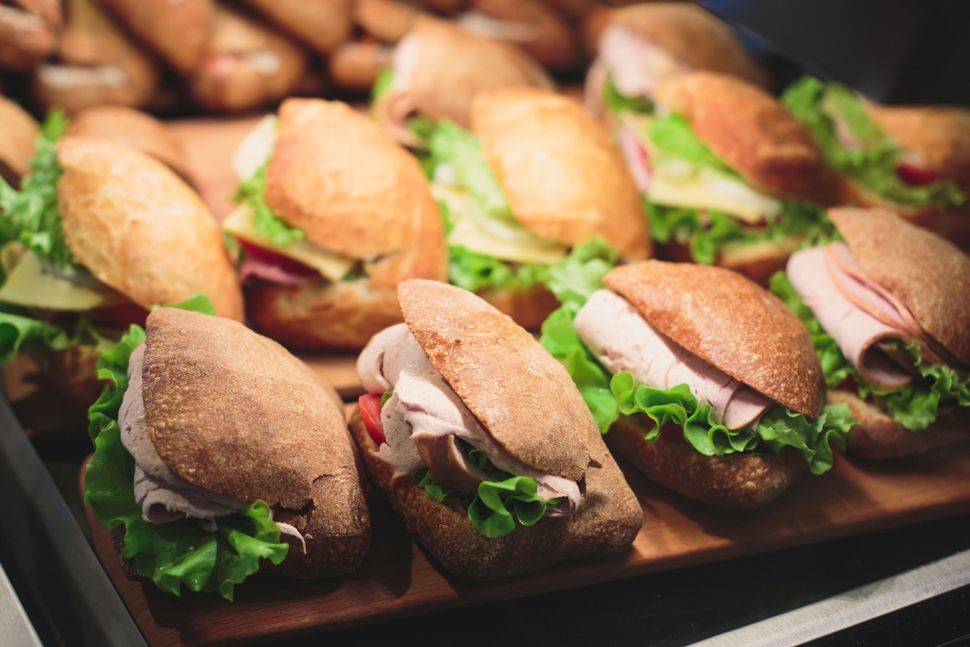 Everyone loves the ole Hillel quote — “If I am not for myself, who will be for me? If I am only for myself, what am I? And if not now, when?” So profound! So snappy! It’s less popular to quote the words a few lines down from Hillel’s frenemy, Shammai, who said, “Greet every person with a friendly countenance.”

But what a great line!

Here’s some good news from the Jewish week. Go forth and greet people with a smile.

If you have a tip for a Jewish news story that brought you joy, please send it to singer@forward.com.

Sandwich mitzvah: A Jewish day school in San Diego broke the world record for number of sandwiches made under three minutes, the JTA reports. That’s 868 sandwiches, a mammoth leap from the piddling previous 490 sandwich record. Better believe this was all done in service of a mitzvah — the sandwiches were given to a nearby shelter, and the 550 student and parent sandwich makers were educated on site by Alpha Project, a San Diego non-profit that serves the homeless.

Camp for all: For many young Jews, summer camp is the happiest and the holiest place in their lives. So get ready for more gilah in the world (a Hebrew word for eternal, ecstatic joy) because a $12 million grant through the Foundation for Jewish Camps will give 16 North American Jewish Summer Camps funding to make their camps more accessible to participants and staff who have disabilities. Called The Yashar Initiative, the funding will go to capital improvements, staff training, and research, with the expectation that each camp will welcome campers with disabilities so that they make up at least five percent of campers.

Am Yisrael Chai: The people of Israel literally live — a study funded by the Bill and Melinda Gates Foundation found that Israel has one of the world’s lowest rate of diet-related deaths. That means that people who live in Israel have the best nutritional balance in their diets of whole grains, fruits, and vegetables. The halvah is also very good.

Choose life: U’vcharta b’chayim — choose life! the Torah commands us. Jodie Moss, a 28-year-old British Jew, did just that. The PhD student endured depression and attempted suicide three years ago. She survived, and a combination of medication and intensive therapy has given her a second lease on life — next week she will run a 250km race across the Sahara Desert, hoping to raise money for the mental health charity that saved her life. Moss, who told the Jewish Chronicle that she’ll be running the famed Marathon des Sables with her “big macher” grandfather in mind, will give to iheart, a North London non-profit

that serves people in crisis and provides education and services in schools and communities.

Justice, Justice: A 95-year-old man in New Zealand caught four busses to attend an anti-racism rally in the wake of the terrorist attacks in Christchurch mosques. There’s nothing Jewish about this story, just a beautiful soul we wanted to highlight. World War II veteran John Sato journeyed long and far to stand — supported by policemen — against racism and hate. “You can feel the suffering of other people,” Sato said, explaining that he hadn’t been sleeping well since the attack. A police officer drove him home. “Very kind, you know,” Sato reflected. As a Japanese-Scottish New Zealander, Sato told the New Zealand Herald that he’s seen plenty of racism in his life. “It’s under cover, usually.” He’s a member of a humanitarian organization, and believes that most people really “care for each other.”

Torah: This week’s parsha of Tazria opens thus: a woman who gives birth to a son is unclean. A woman who gives birth to a daughter is unclean for double the amount of time. And when relevant, circumcise! It’s passages like this that cause a girl to say — what the what, God? So much easier to focus on the hilarious commandments just a few lines later, like “If a man loses the hair on [the back of] his head, he is bald. He is clean.”

We can turn to feminist Torah scholars to help us through these confounding lines. Meet our friend, feminist theologian Judith Plaskow, our pals at the Jewish Orthodox Feminist Alliance (JOFA), and Keshet’s “Torah Queeries”, which offer Torah commentary from a queer perspective.

And remember, this Shabbat and into the week — your friendly countenance.