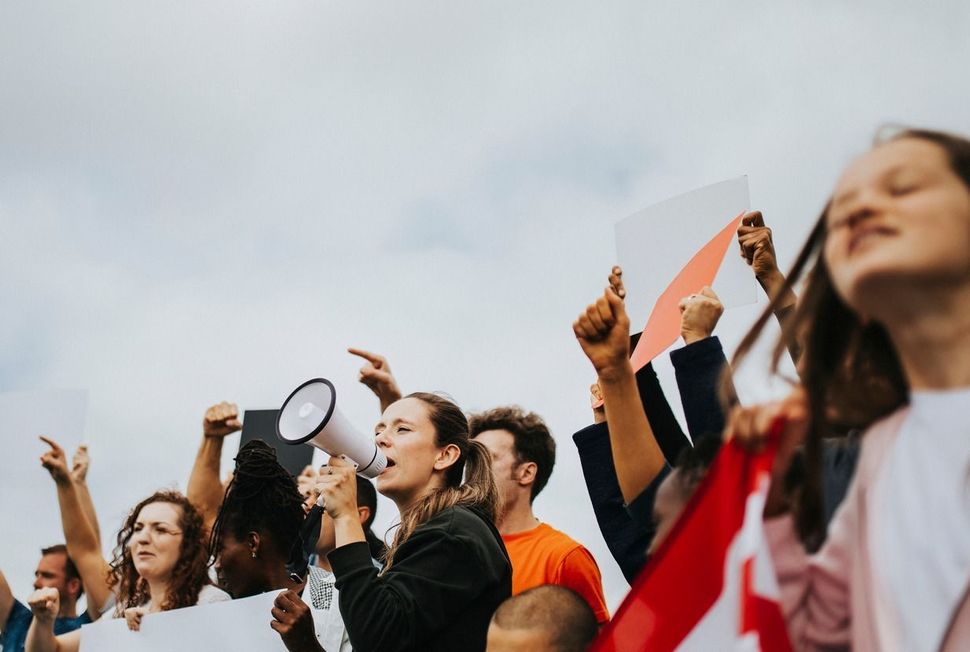 Group of American activists is protesting Image by iStock

Every year at the Passover seder, I make a point of recounting a midrash I once read about the Haggadah’s Four Children casting each child as a different generation of American Jewry. The wise child is the pious immigrant. The wicked child is the assimilated rebel who refuses their parents’ foreign language and customs. The simple child is the offspring of the wicked generation, those Jews who were never taught Yiddish or Talmud. And finally, there’s the child who doesn’t know how to ask.

For a while this seemed like a good description of my generation of American Jewish millennials, so far removed from Jewish identity that we don’t even seek it, don’t even ask to learn about it.

But in recent years, with the emergence of some of the deepest fissures in our communities, this cute metaphor has changed. We young Jews — the most assimilated in American Jewish history — have learned how to ask.

We’re not just asking about religious traditions. We’re asking the more existential questions of being Jewish, like why has American Judaism become this pastiche of light spirituality and fervent Zionism? What does being Jewish in 21st Century America really mean? What are the Jewish values that have been lost since our ancestors arrived on these shores, and are there some that it may be worth resuscitating?

And we won’t stop asking until we get some good answers.

Surveying the young American Jewish landscape today, this phenomenon of questioning is immediately apparent with regards to Israel. From the Open Hillel movement to the anti-Occupation group IfNotNow, young Jews are increasingly questioning the no-daylight closeness that institutional American Judaism has maintained towards Israel for decades. One of IfNotNow’s signature initiatives is the You Never Told Me campaign, in which young alumni of Jewish summer camps, day schools, and youth groups demand our alma maters start to teach us about and answer for the Occupation.

This isn’t surprising. We’re a generation too young to remember the Oslo Accords’ hope for peace. We came of age at a time when Israel invaded and blockaded Gaza, acting with increasing impunity in building West Bank settlements. When the Prime Minister of Israel garners heaps of praise from anti-Semites around the world, and courts an American government indifferent to white supremacy, it’s hard not to question Israel’s place in American Jewish identity.

But it’s not just about Israel and Zionism. A spirit of questioning the established systems of power flows throw much wider trends in millennial Jewry, which has flocked to radical groups both officially Jewish and not. At meetings of the New York City chapter of the Democratic Socialists of America, I’m rarely the only Aaron in the room.

Of course, young Americans as a whole are embracing the political spirit of questioning. More of us prefer socialism than capitalism. We all came of age in the shadow of the “War on Terror,” the Great Recession, and Donald Trump’s election, upending much of the conventional wisdom around politics, the economy, and society more generally. When everything you’re taught about how the world is supposed to work is clearly not true, the only option is the radical project of questioning, of demanding better answers for why things are how they are, and what we must do to make them better.

But for American Jews there is more to it than that. Our trend of assimilation in the 20th Century has dovetailed with rising prosperity, both for America at large and for Jews specifically. As we reaped the material and social benefits of postwar America, including the fall of most institutional anti-Semitism, it was easy to embrace the vision of an exceptionalist America whose tide of liberal capitalism lifted all boats. The distinctly Jewish identities that our forbearers brought with them from the Old Country slipped off into an ever more distant past.

Yet with the great upheaval of the past decade, including a recent surge in anti-Semitic attacks, America’s siren song to the Jews has played out.

As we crash into the rocks, we young Jews are looking back to the Jewish identity that sustained and empowered our ancestors to once again do so for us.

This hasn’t meant a return to religion, necessarily, but to the great anti-capitalist, radical Judaism of early 20th century immigrants. Of course this generation was hardly monolithic. As communists, socialists, and anarchists, they fought intensely among themselves, divided by their attitudes on assimilation, Zionism, and fealty to the Soviet Union.

But what the Jewish radicals of yore shared was a commitment to questioning the capitalist society they lived in, even when it meant arrest and even deportation.

To question is not easy, but to live an honest life in dishonest times, it is necessary.

This heritage is personal for me. For the ancestor in my own family who I look back to as embodying the “wise child” was not Orthodox but a radical: my great-grandfather Samuel. A raincoat factory worker, Samuel was active in the leftist scene of 1910’s New York, editing a Yiddish anarchist newspaper. He and my great-grandmother Rose even raised their children in the radical Ferrer Colony in rural Stelton, New Jersey, whose progressive Modern School encouraged my grandfather’s self-starter interest in machinery at a young age. His sister, my great-aunt Clara, would remain a committed anarchist her whole life, even hitchhiking to Canada to visit Emma Goldman in exile.

Jewish radicalism runs in my family. But even stronger for me and many of my fellow millennial Jews is a powerful tradition that runs not only separate from but contrary to the American capitalist mainstream that has been so thoroughly discredited.

It gives us a community we can be part of without excluding others based on race, religion, or nationality. It is a way to be Jewish without compromising our values by mixing them with America’s capitalism, Orthodoxy’s piety, or Zionism’s nationalism.

In short, it is a Judaism urgently needed in this moment.

Aaron Freedman is a writer based in Brooklyn, NY. Follow him at @freedaaron