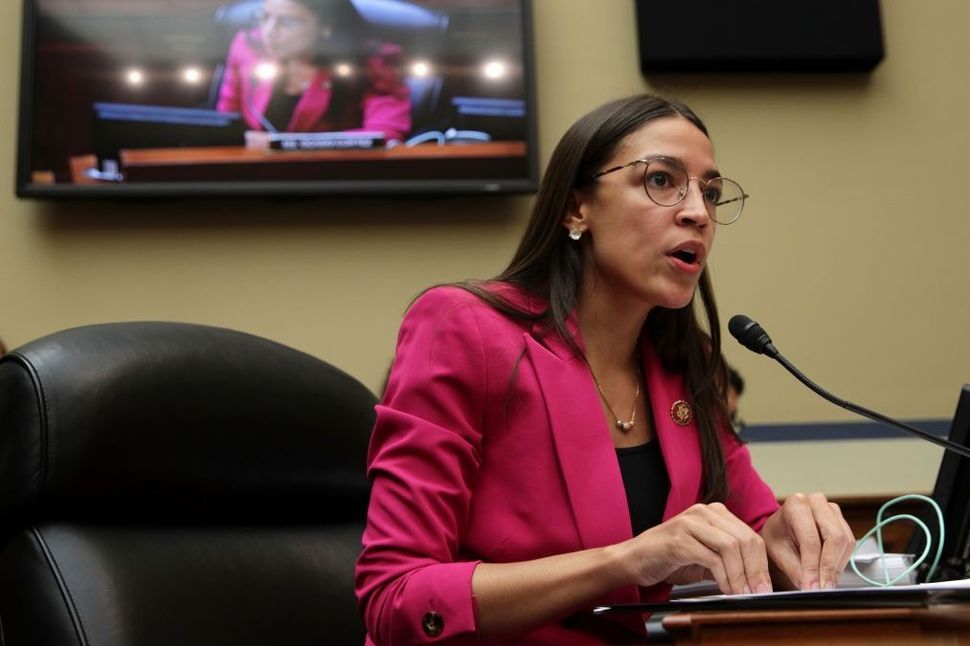 WASHINGTON, DC - JUNE 26: U.S. Rep. Alexandria Ocasio-Cortez (D-NY) speaks during a hearing before the House Oversight and Reform Committee June 26, 2019 on Capitol Hill in Washington, DC. The committee has voted to subpoena Conway after she failed to appear at a hearing focusing on “Violations of the Hatch Act Under the Trump Administration.” (Photo by Alex Wong/Getty Images) Image by Getty Images

In a recent piece titled “Why Is AOC Tokenizing A Fringe Jewish Group?” Seffi Kogen, the Global Director of Young Leadership for the American Jewish Committee, argued that Congresswoman Alexandria Ocasio-Cortez committed the “cardinal sin of progressivism” when she voiced support for IfNotNow, the anti-occupation group; the group is not “representative of American Jews,” wrote Kogen.

To back up his point, Kogen relied on a single survey, from which he extrapolated that most Jews either do not support the anti-occupation work done by IfNotNow or the organization itself.

The survey found that 92% of American Jews call themselves “generally pro-Israel.” But this same survey found that two-thirds of all respondents are also either critical of “some” or of “many” of the Israeli government’s policies.

But Mr. Kogen concludes from this survey that the majority of American-Jewish voters who are openly critical of the Israeli government’s actions can’t possibly be supportive of IfNotNow — which draws its support from those respondents who call themselves “generally not pro-Israel.”

He’s wrong. IfNotNow, by its own language, merely “seeks to end American Jewish support for the occupation.” That’s it.

While I am aware of no specific polling concerning IfNotNow, when one unpacks the legal, military, and political elements of “the occupation,” the evidence shows that most American Jews do not support its constituent elements, and, in fact, they share a significant amount in common with IfNotNow’s perspective against the occupation.

For example, AJC’s own survey from 2019 found that nearly two-thirds of American Jews supported an independent Palestinian state in the West Bank. In other words, they oppose the occupation.

Furthermore, more than two-thirds surveyed answered that either some or all of the settlements should be evacuated when a Palestinian state is established. The transfer of civilians from one territory to another is one element of the legal wrong of the occupation, and this survey makes clear that most American Jews agree that even beyond the purely military aspect, other aspects of the occupation need to be resolved, contrary to the Israeli government’s current position.

Put a different way, they agree that the transfer and settlement issue needs to be resolved roughly in line with IfNotNow’s position of conclusively “ending” all aspects of the occupation.

Notably, Americans of all religions also broadly agree that the continued occupation of Palestinian territories is simply wrong. Take, for example, a University of Maryland survey of Americans from 2018, which showed that less than 20% polled wanted either an indefinite occupation of the Palestinian territories or annexation without equal citizenship.

In fact, there was more support for a democratic one-state solution than there was for the current Israeli government’s position of annexation (of some fashion) or indefinite military occupation.

But even if Mr. Kogen was correct on the theory that a majority of American Jews do not broadly support anti-occupation sentiment (and he is not), it would still be appropriate for AOC to support them in furtherance of her duties to her district.

AOC was duly elected, and has an inherent duty to represent her constituents.

Just like Republican members of the House are permitted to represent the legitimately minute (and objectively wrong) pro-occupation views not shared by most American Jews, so too, AOC is permitted to represent her local constituents in the manner she sees fit. And that includes anti-occupation groups whose goals actually have widespread or majority support of Jews — certainly Jews in her district.

Jonah Nelson is a labor lawyer based in New York City. He is not a spokesperson or member of IfNotNow, and was not paid or encouraged by any organization to write this article; the views are his own.

Jonah Nelson is a labor lawyer based in New York City.