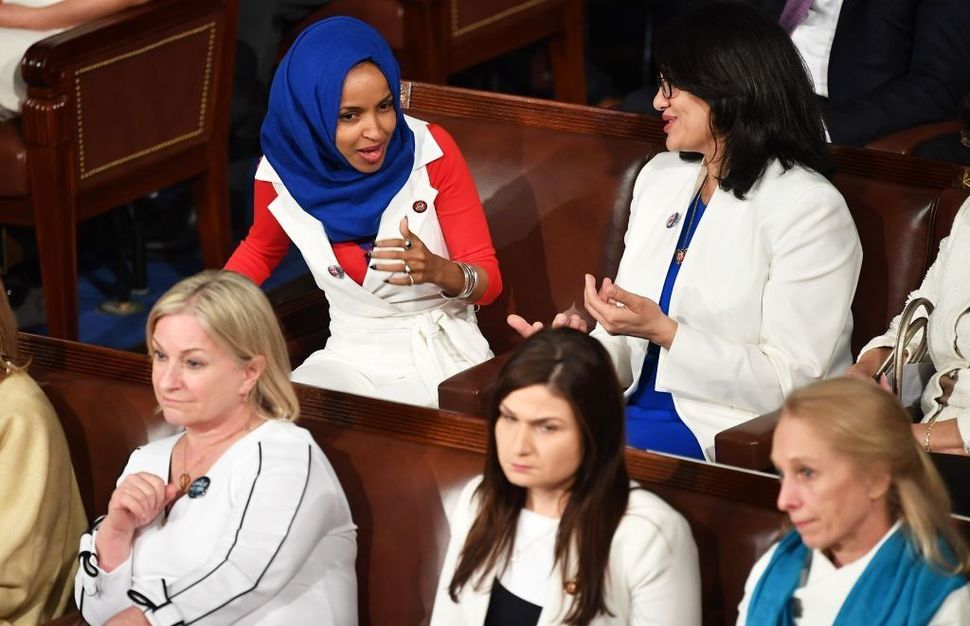 I just heard today that you won’t be arriving in Palestine this weekend. Israeli Prime Minister Benjamin Netanyahu reversed his decision, upon President Trump’s request, and will not be allowing you into the country.

You are heroes to us, for you are women who have since the day you were sworn in devoted all of your energy to improving both the country you belong to — America — and the entire world, including occupied Palestine.

I am writing this letter to you from one of the places that you were planning to visit during your time in Palestine — Hebron. My family has always lived in Hebron. We have been here for centuries, just as the indigenous Jews of Hebron, and we lived in harmony with our neighbors. In 1929, when Palestinians led a horrible riot and killed 67 Jews in our city, 19 Palestinian families hid their Jewish neighbors, saving their lives. One of those Palestinian families was mine, and today, we carry the memory of those acts with pride.

We were also here in 1948, when over 700,000 Palestinians fled their homes and land, many into the West Bank. We were here in 1967, when the occupation of the West Bank began, and my family fled into caves in the hills around our city. My father was shot trying to bring food to his family in the caves, and remains disabled to this day.

I was born in Hebron before our main street, Shuhada Street, was closed by Israeli military order, along with all the bustling shops. Now, settlers drive and walk freely on the street, while checkpoints stand at each end manned by soldiers who degrade and harass us Palestinians, making us show our ID cards and remove our shoes and belts.

They try to steal our dignity. But we are still here.

It was such great news to hear that you were coming to Hebron, not only because you would be the first Members of Congress to see the Israeli Apartheid in the West Bank first hand, but because the American Israel Public Affairs Committee just just brought 71 Members of Congress on a one sided trip to Israel. The members met with Israeli Prime Minister Netanyahu, his political rival, Benny Gantz, and even Palestinian Authority president Mahmoud Abbas, but they saw nothing of the occupation. They did not visit the checkpoints, the wall around Bethlehem, or my city of Hebron — the only city in the Occupied West Bank after Jerusalem where violent and ideologically extreme settlers have forced themselves into the city, protected by Israel’s military. They have their own streets and walkways in Hebron; one side is for Israeli Jews, the other side for occupied Palestinians.

What excellent news it was to hear you were coming to Hebron. My whole city was looking forward to the lunch you were going to have with the with women in Hebron. They are the backbone of our community, sustaining their families despite the daily humiliations we face. Daily, young children must walk through checkpoints in order to get to school. Sometimes on the way home, they are tear-gassed by soldiers. They flee into their mothers’ arms, crying both from the pain of the gas and from the terror of being attacked by soldiers. Their mothers console them. And they begin their daily homework.

The other day I was arrested. It was the night of Eid Aladha and I was walking home. At the entrance of Shuhada Street, I was stopped by Israeli soldiers and before I knew it, violently handcuffed. One of them hit me, and the rest dragged me forcefully to a military jeep, put me, inside and blindfolded me, though it violates the army’s rules.

When the settlers in the street saw me being detained, they started dancing, chanting, and celebrating my arrest. What happened to me happens to many other Palestinians — even to women and children.

I wanted to talk to you about what we can do together to make the occupation costly, to force Israel to give us equal rights. I wanted our women to learn from your leadership, to learn from your resistance and stubborn spirit as strong women, in spite of the difficulties of your life.

You aren’t the first to be denied. Many Palestinians in the Diaspora are routinely denied entry. So are some activists. Right now, Israel is trying to deport Human Rights Watch’s Omar Shakir. Even American Jews are being denied entry. Last year, my friend Ariel Gold was barred entry, and even Peter Beinart, a Forward columnist and CNN contributor, was interrogated at Ben Gurion airport when he came to Israel for a Bar Mitzvah.

But we know why Israel is doing this. As Palestinian Member of Knesset Ayman Odeh put it, “A country with nothing to hide wouldn’t have banned the entrance of two members of Congress.”

He’s right, and what you would have seen in Hebron is exactly what Israel has to hide — abuses and restrictions that call to mind the Jim Crow south, or Apartheid South Africa.

Despite how sad I am that you won’t be able to see all these things with your own eyes, I know that this sacrifice — an especially big sacrifice for you, Congresswoman Tlaib — will not be in vain. Already since entering Congress, you have changed the conversation in America from one of blind support for Israel to one of growing support from Democrats for Palestinian rights. Now you have revealed to the world just how repressive a state Israel is.

For all that I will miss getting to see you here in my hometown, I am heartened to know that two such incredibly strong women are part of our struggle.