Israel Was Right to Ban Tlaib and Omar 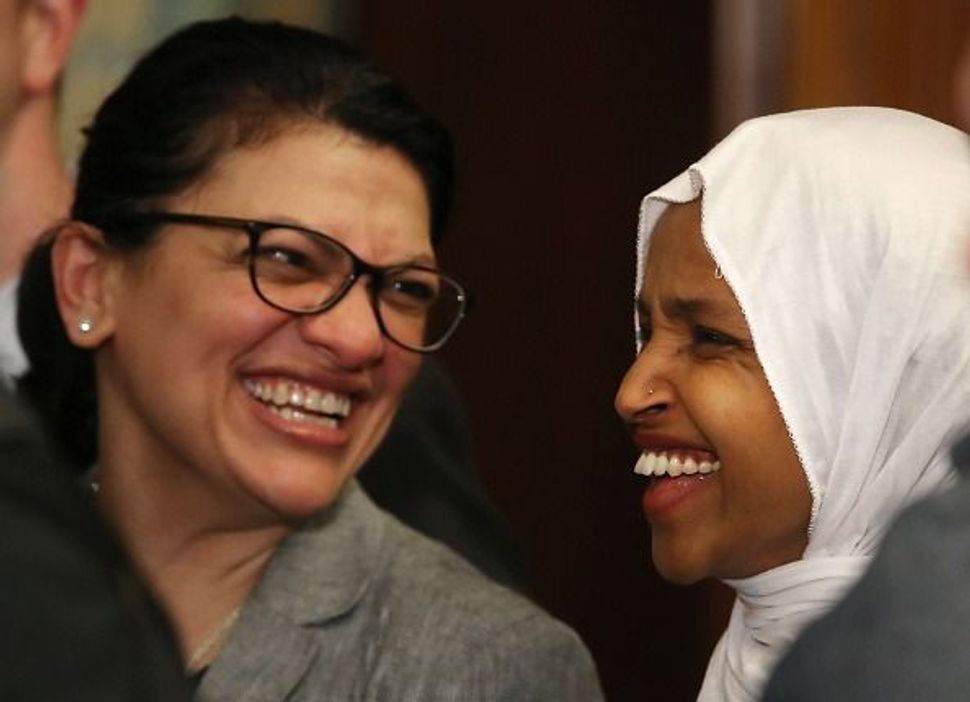 There was no elegance to the messaging, but Jewish sovereignty is not a matter of slogans. The decision to deny Democratic Representatives Ilhan Omar and Rashida Tlaib entry to Israel, which was announced on Thursday, came after their visit had already been approved. It also appeared to be in response to a remarkable tweet from President Trump urging Israel to refrain from “showing weakness” by allowing the two Congresswomen into the country. The response has been predictably brutal, from all quarters. It’s amazing that the response on Twitter has been so vociferous, given the need to multitask with so much handwringing.

It was the right call. Omar and Tlaib were visiting Israel to do it harm. Their visit was not one of critical engagement, and like the disastrous episode of the spies in the Hebrew Bible, they came not to strategize towards a better future but to wound.

If there is cynicism in this episode, it is not on Israel’s part, which was forced to make a difficult decision under impossible circumstances, facing pressure from its own democratic commitments and the elected leader of its most vital ally.

Rather, Tlaib and Omar demand both their cake and the right to consume it: Yes to boycotting, and yes to visiting. Yes to indulgence in anti-Semitic tropes and fellow travelers, and yes to unfettered access to the State of the Jews. Yes to their Congressional prerogatives, and no to joining a bi-partisan group that just visited Israel, and spent time in Ramallah considering both sides in the conflict. These trips are well established, and members of Congress are never barred from meeting with a wide range of voices between the Jordan and Mediterranean.

The details that have emerged about their trip, on the other hand, are damning and unprecedented. They labeled their destination Palestine, rather than Israel. They refused to meet with any Israeli officials, in either the governing coalition or the opposition.

In truth, they were not visiting Israel at all. Their itinerary was to a fantasy where Israel does not exist yet is simultaneously an oppressor and catastrophe, where Palestinians are endlessly victimized and nuance and complexity is not on the agenda.

The organization funding their trip, Miftah, was founded by a woman named Hanan Ashrawi, who addressed the 2001 Conference on Racism in Durban that is remembered today as an obscene display of hatred towards Jews and has slandered Israel as a hotbed of “colonialism, apartheid, and racism.” Miftah regularly decries “Judaization” and accuses Israel of “summary executions”. Its Arabic version publication averred that “much of the chatter and gossip about historical Jewish blood rituals in Europe are real and not fake as they claim; the Jews used the blood of Christians in the Jewish Passover,” a blood libel for which its founder initially refused to apologize.

Jews have no need of a travel agency that specializes in tours of Jew hatred. We remember the sights and sounds well enough ourselves.

Would you allow an arsonist to measure your home, to determine just how might lighter fluid he would need to burn it to the ground? Even if you were a welcoming person, hospitable to a wide range of visitors, would you admit those who despised you, usher in those who wanted to destroy everything you had built? Would you extend your hand to those who despised the life you had built for yourself, against all odds? Would it matter that such a person was a high official, and they demanded that your puny desire to live happily yield to their capricious whim?

The Jewish people have one home, and our house is still fragile; its foundations are still singed. The spectacle of bad faith that would have ensued from their visit alone justifies the ban, democratically passed by Israel’s Knesset against those who advocate boycotting the Jewish State.

But there is a moral case to be made as well, one deeply rooted in Jewish history. The difficult lessons of power and sovereignty mean that our door can’t always be open, and our guard must always be up. Building Israel is a project, and there is a simultaneous project to destroy Israel. If you cannot speak our name, and you treat us as a pariah, and you refuse to talk to our leaders, you are not welcome.

We must strive never to oppress the stranger, but it would be rather strange, and a peculiar sort of self-inflicted tragedy, to see Israel made strange to the world through being conscripted as a prop in the Omar-Tlaib Middle Eastern adventure. Better to cancel the show before it begins.

Ari Hoffman is a writer and lawyer. He holds a Ph.D. from Harvard in English Literature and a J.D. from Stanford. He writes widely on culture, Jewish ideas, law, and politics. His first book, This Year in Jerusalem: The Israel Novel and Why it Matters, is forthcoming from S.U.N.Y. Press.

Israel Was Right to Ban Tlaib and Omar