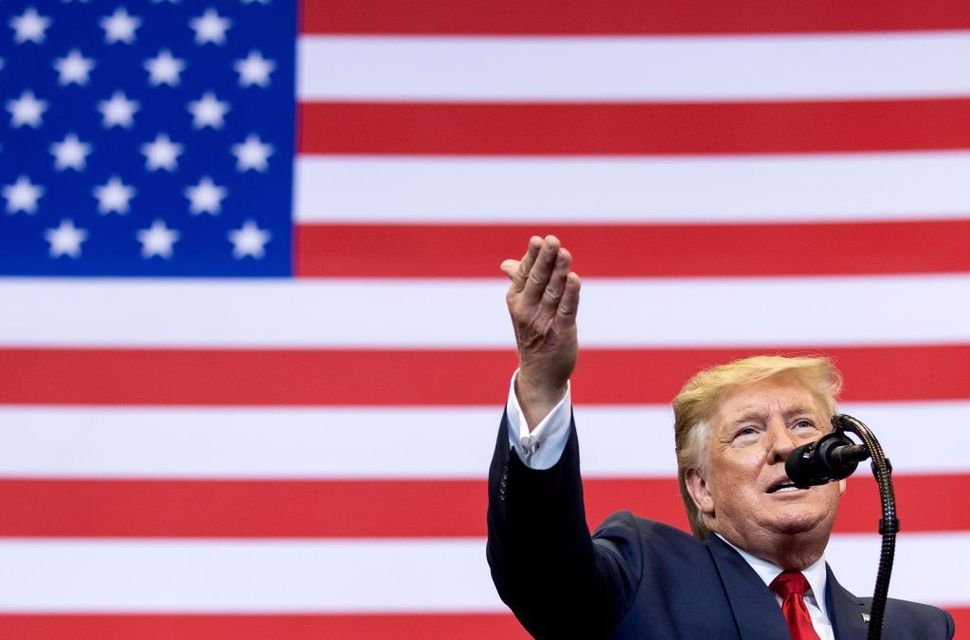 On Tuesday afternoon, President Trump called the vast majority of American Jews disloyal. “I think any Jewish people that vote for a Democrat — it shows either a total lack of knowledge or great disloyalty,” he said. And while he didn’t specify disloyalty to whom, on Wednesday, he doubled down, explaining that a vote for Democrats, which is where 70-80% of American Jews place their vote, means “You’re being disloyal to Jewish people and you’re being very disloyal to Israel.”

These remarks rightly have the Jewish community in an uproar — precisely as intended. The man loves uproar. But he intended the uproar to come from a different direction; he meant to say that any Jew who votes for a Democratic Party which includes Congresswomen Rashida Tlaib and Ilhan Omar is insufficiently loyal to Israel. Since these boycott-supporters are present and tolerated within the party, any vote for it harms Israel. Therefore, all Jews should vote Republican and show loyalty to the solid Trump-Netanyahu agenda.

But he flubbed the point. The words President Trump used immediately invoked the old “dual loyalty” charge against Jews, a classic anti-Semitic canard which implies that Jews are foreign agents, unable to be loyal to the countries they live in because of their loyalty to each other.

It is no surprise to see this President confuse loyalty to the United States with loyalty to Donald J. Trump. He has done it many times before. Even after three years in office, he continues to view his role as that of owner of a privately held company, not even understanding those pesky congressmen who have the nerve to think that they might be members of a non-existent board of directors.

It must annoy the president terribly that 79% of us Jews continue to vote Democratic. This persists despite the appointment of an ambassador to Israel who is an avid supporter of West Bank settlement and annexation, the moving of the U.S. embassy to Jerusalem, and lots more. “Why don’t they love me?” this needy man seems to cry out.

Mr. Trump must understand that we American Jews, fully engaged in the democratic process that is this nation’s pride, are not one-issue voters. All that we have achieved in this country has been due to the equal playing-field created by America’s welcoming of ethnic and religious diversity. We tend to identify with the rights and needs of minorities because we are, and hope to remain, a distinctive minority group in America.

Our worst nightmares, recently realized in Pittsburgh and elsewhere, are of his white nationalist buddies, not of congress members Tlaib and Omar. We are a people raised on the memory of our ancestors’ liberation from slavery, celebrated each year in our people’s most widespread religious practice.

Yes, we care greatly about Israel, and this, too, is an element in our Election Day choices. But there, too, we do not necessarily think that unwavering support for the Netanyahu agenda is for the long-range good of that country.

Israel exists within the Middle East. It must make peace with that fact. A two-state solution, rather than the creeping annexation openly supported by Trump, Netanyahu, and Ambassador Friedman, is the best road toward that future.

Our opposition to Trump’s divisive antics represent our great loyalty – to American democracy, to the values of Judaism, and to a sensible future for Israel. We proudly stand by all of them.

Rabbi Arthur Green is the founder and Rector of the Hebrew College Rabbinical School.