Hasidic Schools Have No Intention Of Providing An Adequate Education 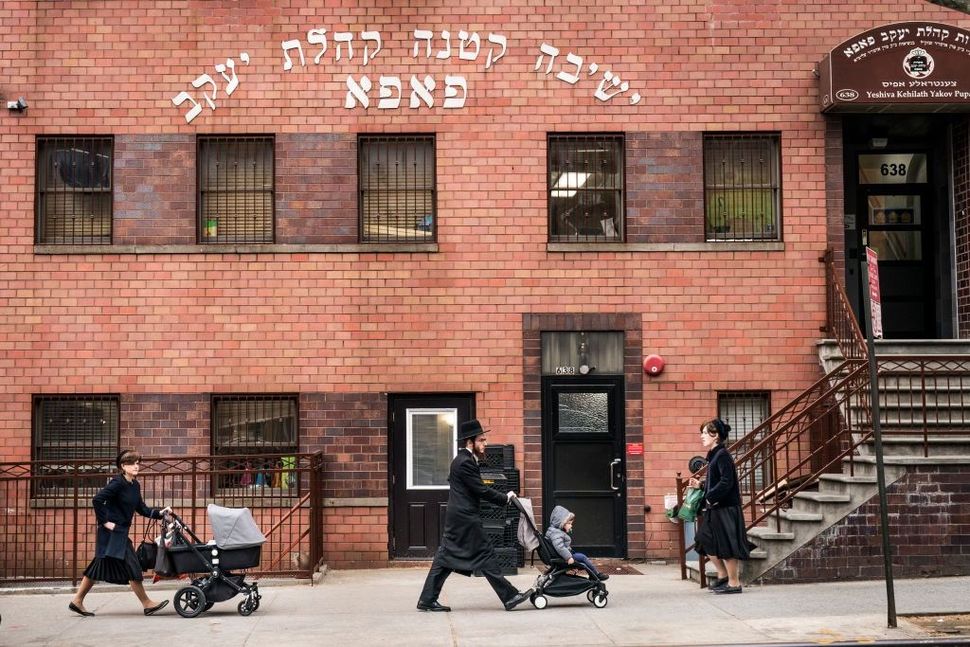 A yeshiva in New York state. Image by Getty Images

In his speeches, Rabbi Aaron Teitelbaum, the grand rebbe of one of the largest Hasidic factions in New York State, has openly and repeatedly acknowledged the lack of secular education in Hasidic Yeshivas.

In a 2018 speech he said, “We all know the truth, that in our primary Torah schools for boys, they studied at most an hour and a half, and in the [high schools], there were no secular studies at all.” He went on to assure his followers that “the Jewish People will not surrender to the wicked, whoever they may be, even the state education commissioner.”

Rabbi Teitelbaum’s public confession only confirmed what yeshiva graduates, parents, reporters, and researchers have been saying for many years about what really goes on inside New York State’s highly insular Hasidic yeshivas: The state of general education in Hasidic boys’ yeshivas is abysmal, and often non-existent — and that is where it exists at all.

Hasidic boys’ private elementary and middle schools typically offer only six hours of instruction a week in English and arithmetic. Secular instruction is typically contained within a single 90-minute period at the end of a long school day, taught by unqualified teachers who are often graduates of the same system. Almost all of these yeshivas lack instruction in history, science, and most other legally required subjects. In high school, secular studies for boys are generally dropped entirely.

What this means is that many yeshivas that receive millions of dollars of government funding annually and educate tens of thousands of Hasidic students fail to adhere to the most basic guidelines of the state’s Education Department, which require non-public school curricula to be “substantially equivalent” to that of public schools.

The consequences of this poor education has also been well-documented; it includes economic dysfunction, poverty, and extraordinarily high rates of reliance on government welfare programs like food stamps and Medicaid.

Faced with the abysmal state of affairs, New York State proposed regulations to address the problem. But yeshiva leaders and their advocates weren’t going to just give up. They attempted to strong arm government officials into ignoring the problem, including Mayor Bill de Blasio, to whom they denied entry to 15 schools. In April of 2018, state Senator Simcha Felder held up the entire state budget to try to force an exemption for yeshivas that have not met the “substantial equivalency” guidelines, which are required for all non-public schools in the state.

That strategy of stonewalling, unfortunately, worked for longer than it should have. To its credit, the New York State Education Department finally rolled out a clear enforcement mechanism in May 2019, which was supposed to take the matter out of the political realm and make oversight continuous and automatic.

But in an effort to ward off the forthcoming regulations, yeshiva leaders shifted to a new strategy: They have launched an aggressive misinformation campaign. Yeshiva leaders have begun to promulgate a series of arguments to sway public opinion in their favor. They have started to argue that Yeshivas already meet substantial equivalency, that yeshiva students outperform public school students on Regents exams, that “substantial equivalency” was never intended to mean similar subjects for similar hours but rather “substantial in rigor,” and that the high poverty rates in Hasidic communities and attendant reliance on government programs is simply false. They have also argued that Hasidic households have only single earners, and thus earn less than non-Hasidic households, and that large family sizes are to blame for inadequate income, and — most stunning of all — they argue that their yeshiva education prepares graduates for Harvard and other Ivy League schools.

All of these claims rely on the same conflation of non-Hasidic yeshivas with Hasidic ones, even though the differences between them are monumental. Modern Orthodox yeshiva students do indeed perform well on Regents exams, and are well prepared for entrance into elite universities. To claim the same is true for Hasidic yeshiva students is an utter farce.

I know this because I attended such schools, in the Belz Hasidic community, for elementary, middle, and part of high school. I was provided with an unlawfully substandard education until high school, after which I received no general education at all — despite going to school every day.

My experience is not unique or an outlier, but par for the course for Hasidic boys in the community’s education system. Unguarded, the yeshiva leaders have admitted as much. For example, the principal of Satmar’s United Talmudic Academy admitted to the news site DNA Info in 2013 that secular studies were not provided after eighth grade. Yeshiva Oholei Torah, the most prestigious of the Chabad-Lubavitcher yeshivas, is known not to provide instruction in essential secular subjects even in elementary school. In a recent speech, the dean of this school openly talked about tricking and intimidating city inspectors.

It’s nothing short of astonishing that these people are now arguing that poor education does not lead to poverty among Hasidic households, which is ironic given a long history of efforts by Hasidic leaders to obtain government funding for their communities on the basis that they are exceptionally in need of assistance. Kiryas Joel and New Square, two large Hasidic enclaves in New York State, are among the poorest areas in the state and the country.

Even if we accept the claim that large families and single incomes are the main reasons for poverty in the Hasidic community, there is still no conceivable rationale for continuing the willful neglect of basic educational standards. The fact that Hasidic communities have large families and single incomes — and therefore greater needs — is an argument for improving secular studies, and thereby expanding the economic opportunities available to them.

The misinformation campaign by yeshiva leaders must be seen for what it is. The dozens of people who have spoken out publicly — through formal complaints and interviews in the media — are not liars, and neither are the yeshiva leaders who have admitted to the problem. There is a good reason why half of the yeshivas under investigation by the city were too afraid to let inspectors in for three years: The problem is very real.

Unfortunately, the broader yeshiva community has chosen to provide cover for Hasidic ones, which are the worst offenders.

Please join me in my attempts to cut through the smoke of misinformation and insist that every child gets the education they deserve.

Naftuli Moster is the executive director of YAFFED, a non-profit that advocates for increasing secular education taught in ultra-Orthodox schools

Hasidic Schools Have No Intention Of Providing An Adequate Education