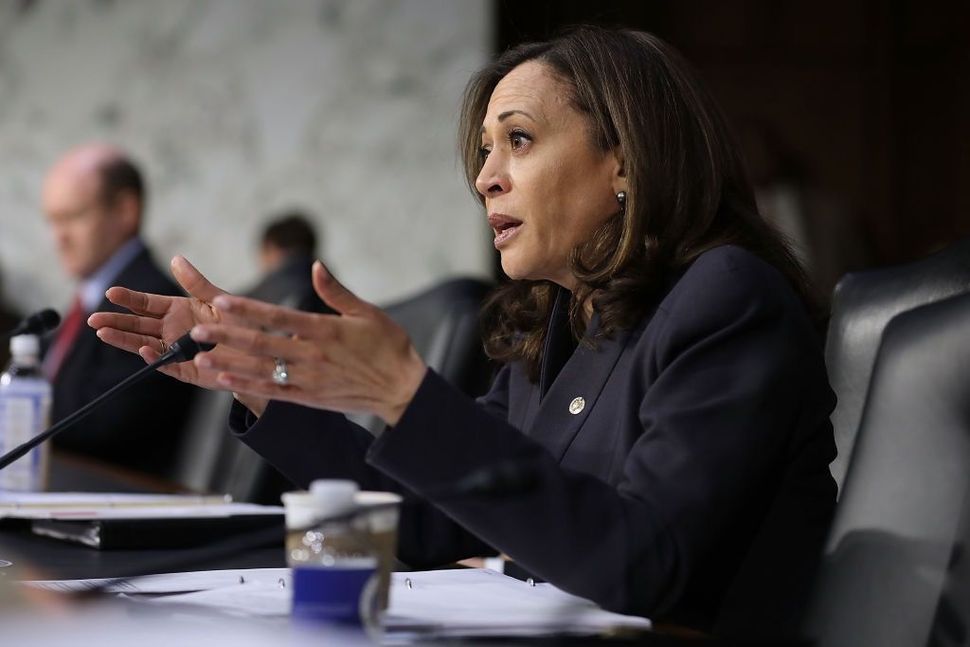 Kamala Harris recently called for Trump’s Twitter account to be suspended for violating the site’s own terms of service against hate speech. Many in the media mocked her for focusing on what they saw as a trivial issue. However if you’re a member of a marginalized group, subject to the constant onslaught of Twitter harassment, you know that stronger rules against hate speech are vital to our safety. 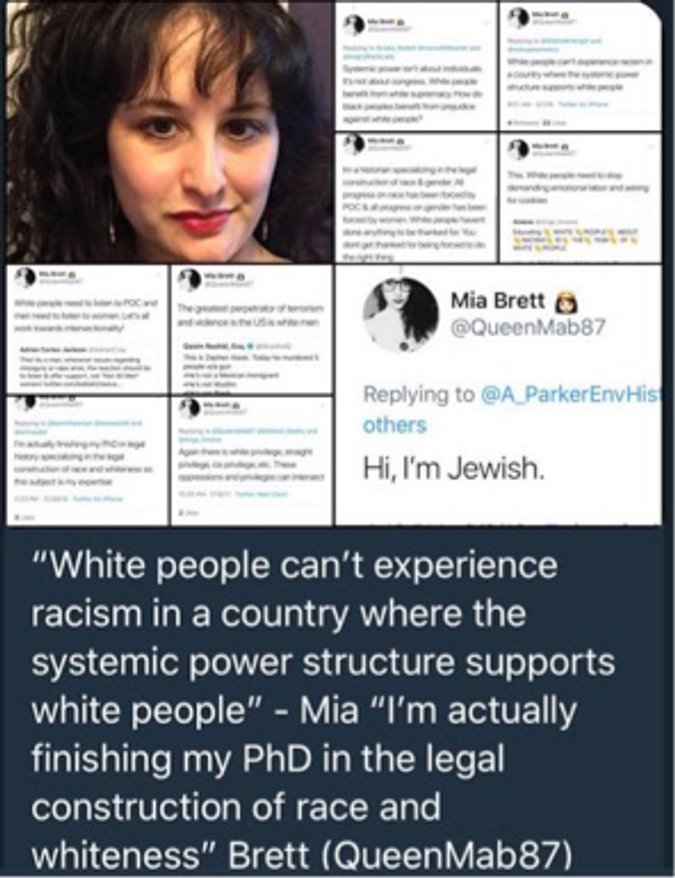 If you spend any time on the internet it should be obvious that women receive an outsized amount of harassment just for publicly existing and having an opinion. If you read the Forward regularly you might have some idea about the increased levels of anti-Semitic harassment lately from white nationalist accounts. A group on Telegram was recently in the news for publishing a list of Jews and information about them, myself included.

What you might not be aware of, is how sexism and anti-Semitism intersect, causing women like me to be subjected to tweets like the one below demanding to see my “Khazar milkers.” Yes — white supremacists can hate Jews but still demand to see my boobs, which according to stereotypes must be very large. 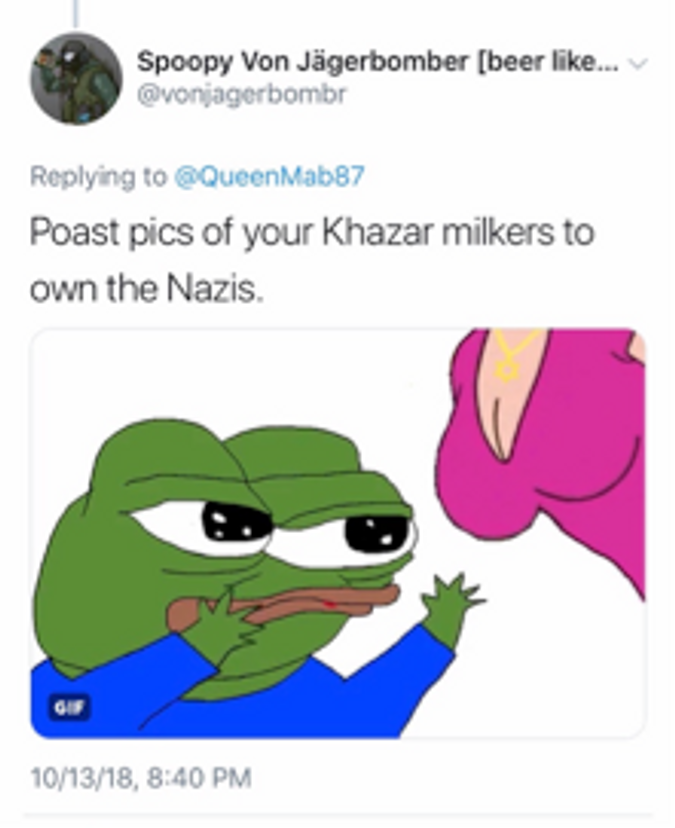 Anti-Semitism becomes sexualized Image by Courtesy of the Author

You also might know by now how white nationalists like to mock Jewish women’s looks. When I’ve been targeted by white nationalists, one particularly violating thing they did was dig through photos of me to find the ones that were the least flattering to use my appearance against me and all Jewish women. I have a stereotypical Jewish nose and frizzy hair and I’m also not the skinniest person. White nationalists aren’t the only sexist men to mock my looks but their use of this sexist low hanging fruit of an insult hits extra hard when coupled with seeing my looks as a bad reflection on my entire community.

I felt a lot of shame for letting these comments about my looks get to me until I realized it was more the fact that I was reduced to my looks than that they thought I was ugly.

Bullying women by attacking their appearance meets anti-Semitism. Image by Courtesy of the Author

Unfortunately I don’t only face the combination of sexism and anti-Semitism from men on the right. Often when I am discussing women’s rights and feminism, men on the left demand I answer for Israel as part of my feminism or I’m not a true women’s rights advocate. It doesn’t matter that I’m not Israeli and have never even set foot there: to them, my Jewishness means I’m responsible for their actions.

Alternatively, Jewish men hold me accountable for possible anti-Semitism in women’s movements. As someone who is active in politics and activism, I had a lot to say about the controversies involved with the Women’s March when they first attracted attention. However, my priority in those conversations was to women’s rights and solidarity. For Jewish men who didn’t need to worry about the women’s movement fracturing, I often wasn’t prioritizing my Jewishness enough.

One of the worst, and still ongoing, Twitter harassment experiences I’ve had came from a 2017 tweet where I casually mentioned that Ashkenazi Jews were vulnerable to rape by Cossacks. I have since learned this narrative isn’t accurate, something I didn’t know that at the time.

Due to this one off tweet, I am to this day, regularly subjected to men supposedly on the left calling me “Cossack rape girl” whenever they disagree with any stance of mine. As a woman who has been sexually assaulted it can be very upsetting to see these tweets randomly show up in my mentions. Whatever mistakes I made, no woman deserves to have men who call themselves allies bring up rape so casually.

Two years after an erroneous Tweet, the author still gets responses like these from men who disagree with her. Image by Courtesy of the Author 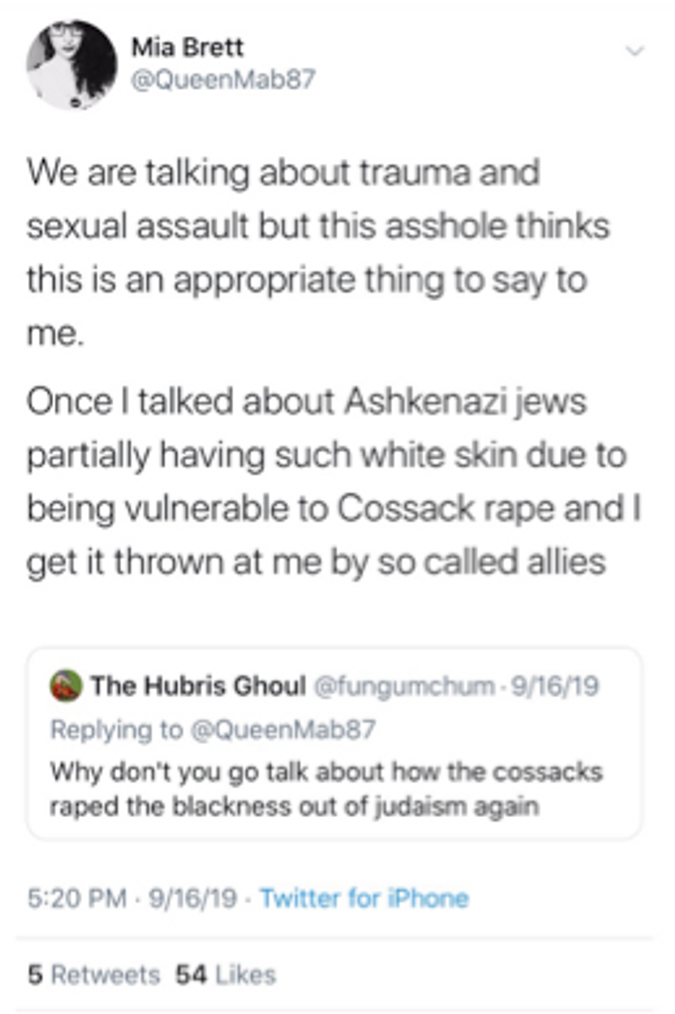 The author responds to an online harasser. Image by Courtesy of the Author

While the sexist comments, rape threats, and general condescension are bad enough on their own, the addition of anti-Semitism in this harassment makes me feel like I am somehow letting my community down through mistakes on my part. I also feel more vulnerable from anti-Semitism as I face the constant sexist onslaught just walking down the street: Unfortunately Jewish men don’t always stand up for Jewish women on our terms.

While this extreme harassment takes a toll on me, so does the erasure of Jews and Jewish values by Christians and atheists raised in Christianity. There is no such thing as “Judeo-Christian” values, despite many in the US suggesting so to subsume Judaism, encourage Islamophobia, and distract from the Christian hegemony often at play. I’ve seen so many rabbis — particularly women — have their expertise as a religious leader questioned simply for explaining Jewish support for abortion.

Another example of this double-bind occurred at the start of the impeachment inquiry at the end of September. I spoke out about the need for the holiday recess so Jewish members of Congress could go home to observe Rosh Hashanah and Yom Kippur. What I thought would be an innocuous reminder for people who didn’t know about the holidays spiraled into me defending Jewish religious and cultural practices from an assault from all sides.

Many of the responses implied it was unpatriotic to take a break at the beginning of the inquiry for a “vacation,” while others proudly held onto their ignorance that missing these days with ones family was no big deal. People who hold themselves out as allies to marginalized groups thought it was completely acceptable to tell me I was being ridiculous. Some even accused me of being against workers rights because I was arguing for “elite” Jews to have the time off while others were forced to work on holidays.

This kind of forced assimilation into a Christian society and their calendar, as well as the dismissal of our customs, feeds into Jews seeming more othered by society, which further supports anti-Semitic narratives of dual loyalty. It was suggested that those who didn’t prioritize impeachment could go home to their families if they chose to, bringing up a forced choice between Jewishness and patriotism.

If you belong to the corner of Twitter I do, or if you read a lot of Jewish women writers, none of this will be a surprise to you. The behavior is so ubiquitous I almost didn’t want to write yet another article on the harassment faced by Jewish women on the internet. What else could I say that other women hadn’t said before me?

The problem is that no matter how many articles we write, how much we scream about this harassment, it continues. And people still don’t believe us.

Every time I get harassed I save the screenshots before reporting and blocking. I do that because I know my word won’t be enough for people to believe me and sympathize. Even among people who do believe us, too many of them dismiss it as “only trolling” that I should just ignore.

That attitude also ignores the very real problem that there are people behind these accounts who feel this way and enact both emotional and physical violence on the women in their lives. And, as many women have noted before, the constant stream of misogyny and anti-Semitism is demoralizing and takes its toll. As a freelance writer and political activist I spend a lot of time on Twitter, I have to for my work. Ignoring my experiences there and telling me “it’s not real life” isn’t helpful.

We know that people, especially white men, are being radicalized online using sexism, racism, and anti-Semitism. We are seeing the affects of this in mass shootings, rising anti-Semitic hate crimes, and alt-right media. So much of this starts with violence against women. Misogyny and gender based violence are the canaries in the coal mine of white, male terrorism.

We need our institutions to start taking this online harassment seriously, if not for the women being hurt, then for society at large. These men should not be dismissed as harmless trolls sitting in their mothers’ basements, taking their anger out on women because they’re too scared to talk to any in real life. Many of these men are otherwise normal, functioning members of society who also might be hurting the women in their offline lives, or might be planning to use their guns for a political statement.

Many of these accounts go unpunished on Twitter: if the site used their algorithms to catch white nationalists they would also likely have to suspend Republican Twitter accounts.

When Kamala Harris calls for suspending Trump’s Twitter she is drawing attention to these exact issues. Holding Trump’s tweets accountable will also make it easier to hold other white nationalists accountable and make the internet much safer for marginalized groups.