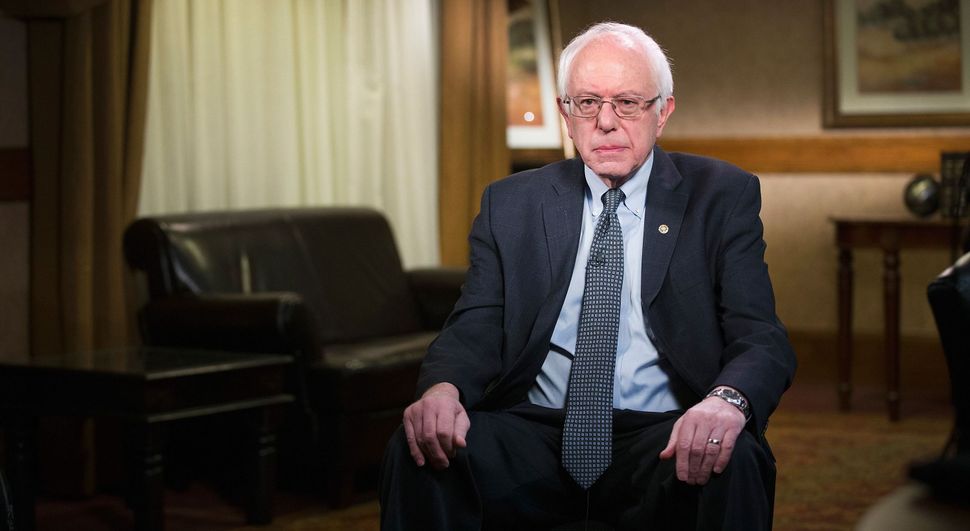 Bernie Sanders reminds me of Moshe Dayan. (Read on please.) He’s got a patch on one eye. Dayan wore his patch because of military injury. Sanders wears his for ideological purposes. It’s on his left eye and it prevents him from seeing what’s going on next to him. However, it leaves him eagle eyed for correctly seeing events across the political transom.

In a recent essay in Jewish Currents, a magazine that describes itself as “a magazine committed to… thought, activism, and culture of the left,” Sanders expressed his concerns about the rising tide of antisemitism. He correctly analyzed the expressions of antisemitism on the far right: “They accuse Jews of coordinating a massive attack on white people worldwide, using people of color and other marginalized groups to do their dirty work.”

He also correctly identified antisemitism for what it is: an absurd “conspiracy theory that a secretly powerful minority exercises control over society.” It serves, Sanders correctly observes, “to divide people from one another and prevent us from fighting together for a shared future of equality, peace, prosperity, and environmental justice.” It is, Sanders notes, “what drove the Pittsburgh murderer — that Jews are conspiring to bring immigrants into the country to ‘replace’ Americans.”

Reading the essay, I was pleased at his accurate analysis of the situation. I even allowed myself to think that maybe he used my recent book, Antisemitism Here and Now, as a resource.

But, as I read on, I realized that if he had actually relied on my book, he had read selectively. His selective view of the situation became clear when I read his statement that “opposing antisemitism is a core value of progressivism.”

That may have once been an accurate assessment. Today it is no longer the case.

The sentence should read, “Opposing antisemitism should be a core value of progressivism.” It should be. But today, it is not.

Anyone who has followed the exploits of the Labour Party in the United Kingdom and the way in which Jeremy Corbyn and those around him have not only cavorted with antisemites and Holocaust deniers but have adamantly refused to take antisemitism seriously and have outrageously blamed the victims for their own travail, knows that this is not soley a problem of the right.

Though the antisemitism of the right and the left rely on the same tropes and stereotypes, they constitute different threats. The right has become overtly violent. Pittsburgh, Poway, and Halle. The names come rolling off our tongues easily and with an eerie familiarity. There are, of course, so many other places where similar tragedies have been prevented by good police work.

Some people, particularly those on the right, dismiss these assailants are representing a fringe element. But this fringe has been motivated by others who do not commit such violence but know how to stir it up.

On the left, the antisemitism is more structural in nature. It expresses itself in institutions and organizations, such as the UK Labour party. But it, too, can lead to violence.

When Jeremy Corbyn welcomes Hamas and Hezbollah leaders to the Parliament and describes them as “our friends,” he is openly supporting violence. When Linda Sarsour and Tamika Mallory embrace Louis Farrakhan, whose words drip with antisemitic incitement, they are helping fuel the violence that is so evident in places such as Crown Heights, where some African Americans have declared it open season on Jews. When the founders of the BDS movement call for the destruction of the state of Israel, they are supporting violence.

It was good to see him come out in favor of a two-state solution — though, according to him, the only thing necessary for such a solution is for Israel to make concessions; the other side is free from any wrong.

But for him to take this myopic view of such a pernicious problem leads to only one conclusion: He is more interested in scoring points against the right than he is in helping alleviate the results of this longest hatred.

Sanders, of course, is not alone. He has many compatriots on the right who do not see the hatred brewing right next to them. Nor do they acknowledge the role President Trump, who I have no reason to believe is an antisemite, plays in dividing Americans into “us” and “them.”

For the moment, Jews are among the “us.” But history teaches us not to expect that to last.

It is time to stop the use of antisemitism as a cudgel to score political points. Politically weaponizing this longest hatred does, at its best, nothing to stop it. At its worst, it gives comfort and cover to the very antisemites people like Sanders, on the left, and those on the right claim they want to stop.

Both sides should take off their eyepatch and see — however painful it may be — what is happening right next to them.