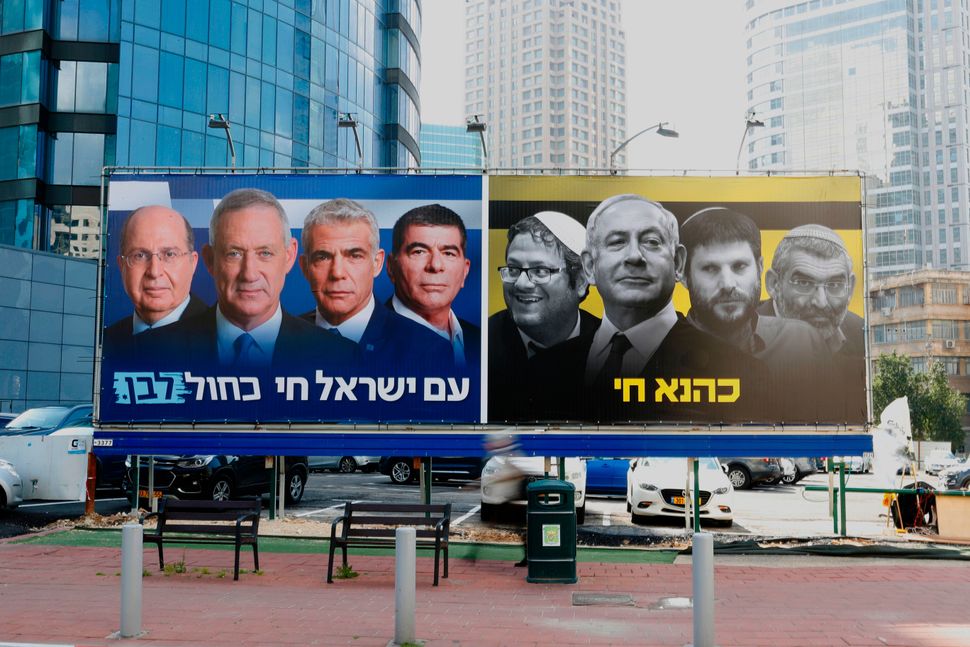 (L to R) A picture taken on March 17, 2019 in the Israeli city of Ramat Gan in the suburbs of Tel Aviv shows a billboard bearing portraits of Blue and White (Kahol Lavan) political alliance leaders Moshe Yaalon, Benny Gantz, Yair Lapid and Gabi Ashkenazi, with a caption below reading in Hebrew “The nation of Israeli lives”; alongside another billboard showing Prime Minister Benjamin Netanyahu flanked by extreme right politicians Itamar Ben Gvir, Bezalel Smotrich and Michael Ben Ari, with another caption in Hebrew reading “Kahana Lives” in a reference to a banned ultranationalist party in the 1994. (Photo by JACK GUEZ / AFP) (Photo credit should read JACK GUEZ/AFP via Getty Images) Image by JACK GUEZ/AFP via Getty Images

Today marks Yom HaShoah, Israel’s Holocaust remembrance day. It’s one of the most solemn days in the country, and falls precisely a week before our Memorial Day, followed by Independence Day a day later; the state’s history condenses into a week in April each year.

But this year, a number of unprecedented circumstances came together to allow self-serving politicians to form a government that leaves most voters disappointed and will cause massive damage to our democracy.

On Monday night, after Yom HaShoah officially began, Prime Minister Benjamin Netanyahu and his rival, Benny Gantz, agreed to form a unity government. It came as something as a shock, given that Gantz ran three elections on ousting Netanyahu, getting the historic support of the Join List and Balad, the first time the Arab nationalist party has ever endorsed a candidate.

So it was a shocking betrayal when Gantz broke his party back into its small factions and formed a unity government on the grounds that “these are not normal times, and they call for unusual decisions.” He was of course referring to the country being on lockdown due to the coronavirus pandemic.

The coronavirus has been Netanyahu’s lucky strike. Without it, Gantz would not have felt pressured to join forces to form a government — any government. Netanyahu’s corruption trial has also been postponed to May 24 — for now. For Netanyahu, the coronavirus is his political and legal immunity.

Netanyahu, whose nickname is “the wizard of Balfour Street,” showed that even with corruption charges, a public health crisis and unemployment at an all-time high, he still had a card up his sleeve. And Gantz, a former chief of the staff for the Israeli Defense Forces, proved that you can hold the highest military post and still be a rookie when it comes to politics.

Netanyahu still controls his own legal destiny, mostly by having his emissaries attacking the judicial system.

But amazingly, Gantz and Netanyahu are not alone. While they have behaved in unimaginably brazen ways, Israeli politics has seen outrageous levels of cynicism and self-serving shenanigans in the past year.

Just look at the Labor party: After the second election, Labor, which merged with Gesher, a self-described “social-rights” party led by Orly Levy, merged with Meretz, the left-wing Jewish party. Both Levy and Amir Peretz vowed that they would not sit with Netanyahu in a government, and that they would enter a government supported by the Arab-led Joint List. Of course, after she didn’t deem it to be politically expedient to oppose Netanyahu, Levy went back on her word, and Peretz dissolved the merger with Meretz. Both are expected to join the new government.

Or take Yoaz Hendel and Tzvika Hauser, two backbenchers from Telem, one of the factions that made up Blue and White. Both represented the hard-right faction of the alliance. However, as MPs, their electoral weight is almost nonexistent. That didn’t stop them from acting as a fifth column within Blue and White, threatening to go against Gantz if he dared to accept an endorsement from the Joint List. They ended up breaking with Telem, and forming a two-person party.

The audacity of Israeli politicians in the wake of three elections and the coronavirus is astounding and sickening. When governments all around the world are cutting pay for ministers and members of parliament, the new government is set to have a record number of 36 cabinet members. In comparison, there are 22 in the UK and 15 in the US. This means forming new ministries for the new cabinet ministers, which is projected to cost roughly 700 million shekels over the next three years.

Beyond the economic damage, this unprecedented government has left Israeli society fractured and weak. The people who voted for Gantz, for his promise of clean, civil politics are feeling betrayed. Labor voters who are seeing their party vanish from the political map completely are left without a political home. Even some right-wing voters are disappointed that Netanyahu chose to opt for a more politically center government than a more right-wing one that would forcefully annex the West Bank and put the chains on the judicial branch.

The government has already drawn up plans reopen the country. But while Israelis may see the country getting better from the coronavirus, most don’t have much hope for fixing for society’s ills. This government signifies what Israel has become: a state of a constant and unprecedented emergency.