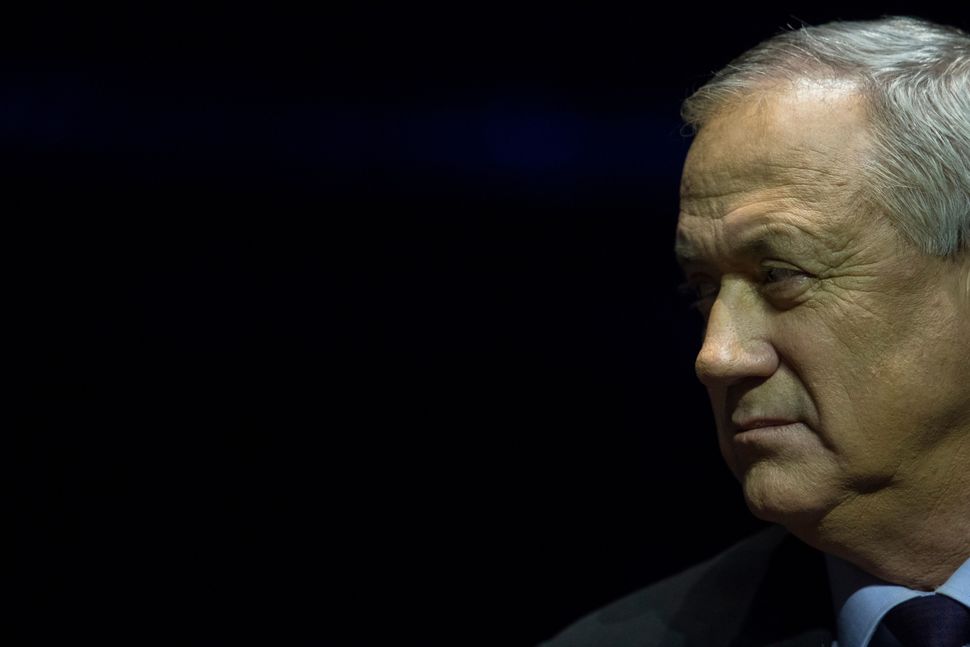 Israeli politicians, with their famous lack of principles and shifting priorities, often make fools of prognosticators trying to discern the direction in which the country is headed. Along the way, they also tend to make fools of their own supporters, or anyone who placed a cautious amount of faith in them. Still, opposition leader Benny Gantz’s astonishing display of political fungibility yesterday managed to shock even the most hardened observers.

Gantz, who has spent the last year being pilloried by Netanyahu and his sycophants as a weak and mentally deficient man set on making deals with “terror sympathizers,” decided to drop his ostensible bid to become prime minister and support an “emergency” unity government with Prime Minister Benjamin Netanyahu. The incumbent, facing trial in May for bribery, fraud, and breach of trust, is safe in his place for at least the next several months.

Most of all, though, this was a dispiriting moment for Israelis who had hoped for a brief moment that Netanyahu’s divisive and allegedly criminal tenure would come to an end. The new hope, if there is one, is to fully demolish what remains of the wall that separates the Zionist Left from non-Zionist Arab Israelis.

To recap: a broad majority coalition of former IDF generals, Avigdor Liberman, ex-Likudniks, liberals, leftists, and Palestinian citizens of Israel came together on March 15th — two weeks after an election that Netanyahu’s Likud Party appeared to have won — and recommended Gantz as their candidate for prime minister.

That the entire Joint List of parties representing the country’s Arab minority supported the army chief who directed the last major Israeli military campaign in Gaza, Operation Protective Edge in 2014, was of huge consequence; that he was also supported by Liberman, a buffoonish anti-Arab racist, spoke to the widespread desire to see the end of the Netanyahu era.

Realizing they had lost their majority in the Knesset and were facing the prospect of legislation blocking Netanyahu’s path to another term, the Likud, through its Knesset Speaker, Yuli Edelstein, tried to use the coronavirus pandemic as a pretext to close the Knesset and prevent the election of a new Speaker (electing a Speaker is a prerequisite for establishing a majority and enacting laws).

On Monday, Israel’s Supreme Court ruled that Edelstein could not defy the majority in the Knesset and would need to hold a vote for his replacement on Wednesday. Rather than implement the unanimous opinion of Israel’s highest court, Edelstein resigned, which delayed the vote until Thursday.

This brings us to Gantz’s decision to unexpectedly throw his hat into the ring in the Speaker’s race. Previously, Gantz intended to support a different candidate from his Blue and White coalition, but Likud threatened they would close the door on a “unity government” if he proceeded with the plan to elect a Speaker and pass legislation prohibiting someone under indictment (such as Netanyahu) from being prime minister, which is already the case for every other seat in the cabinet. So Gantz’s entry into the race signaled to the Likud and Netanyahu that he was ready to capitulate.

We are now only days away from Gantz formally backing Netanyahu in exchange for a dubious promise that Gantz will assume the premiership in September 2021. Gantz’s partners in Blue and White, Yair Lapid and Moshe Ya’alon, both of whom previously served in senior positions in Netanyahu governments and know the value of his promises, abandoned Gantz.

Israelis, Jews and Arabs, who trusted Gantz not to enter a government with Netanyahu feel betrayed. It is true Gantz is not the first opposition leader to break such a promise. But he willingly ceded power at a moment of unexpected strength: He had a broad majority in the Knesset to pass a law preventing someone like Netanyahu from ever forcing the entire country to carry the weight of their personal legal woes again. Even the two members of Gantz’s own party who said they would vote down a government headed by him that was supported by the Joint List wanted to at least support the law.

Yet the emotionally drained and defeated Israeli opposition shouldn’t be too surprised by this betrayal. In rationalizing his abrupt turnaround, Gantz tweeted, “Israel before everything else.” This was his original nationalist campaign slogan, and a reminder that by even contemplating a coalition government backed by the Joint List, he was also breaking a campaign promise to form a government only from the “Zionist majority.”

Benny Gantz will not be the Israeli leader who brings to an end the national political boycott of the country’s largest minority group. In these times, it is hard to be optimistic there will ever be one.

But if another consensus center-left figure emerges to challenge the Likud’s hold on power, they will have to reject from the outset the self-defeating notion that only Zionists have a say in the country’s future.

Abe Silberstein is the Associate Director, North America, of The Abraham Initiatives, an Israel-based NGO working to achieve equality between Jewish and Palestinian citizens of Israel. He tweets @abesilbe. His views and opinions do not reflect those of his employer.