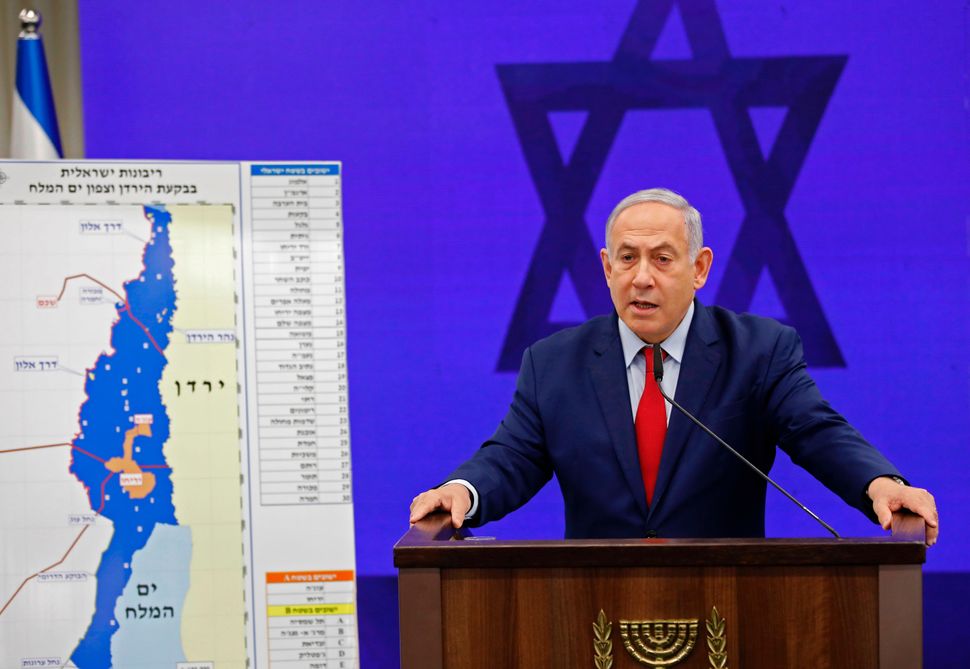 Israeli Prime Minister Benjamin Netanyahu speaks before a map of the Jordan Valley as he gives a statement in Ramat Gan, near the Israeli coastal city of Tel Aviv, on September 10, 2019. – Israeli Prime Minister Benjamin Netanyahu issued a deeply controversial pledge on September 10 to annex the Jordan Valley in the occupied West Bank if re-elected in September 17 polls. He also reiterated his intention to annex Israeli settlements throughout the West Bank if re-elected, though in coordination with US President Donald Trump, whose long-awaited peace plan is expected to be unveiled sometime after the vote. (Photo by Menahem KAHANA / AFP) Image by MENAHEM KAHANA/AFP via Getty Images

The most serious setback to peace in the Middle East has taken place under the cloud of the coronavirus and the internal Israeli political scene. A chance, however, still exists for a unified Arab coalition with action by American Jews to create a firewall that will help preserve a chance for Israeli-Palestinian peace.

As part of the deal for the emergency government between the Israeli caretaker Prime Minister Benjamin Netanyahu and his political rival and former IDF Chief of Staff Benny Gantz, an Israeli government-in-the-making is on the record as supporting unilateral annexation of large swaths of the West Bank.

Israel appears to be set on a dangerous anti-peace act that will destroy the very fragile and quickly lapsing chance for a Palestinian-Israeli two-state peace deal.

The April 20 Netanyahu-Gantz agreement calls for legislation paving the way to unilateral annexation of enormous parts of the West Bank to start as early as July 1, based on the controversial Trump Mideast peace plan.

Articles 28 and 29 of the Israeli coalition deal condition such annexation on the consent of the Trump administration and state that such measures would be possible only if the annexation preserves the security and strategic interests of the state of Israel, including the need to keep regional stability, keep existing peace agreements and pursue future peace agreements.

It is unclear whether the Trump administration, embroiled in America’s most difficult challenge in decades, will have time or political capital to invest in a controversial issue that is opposed by nearly the entire world and much of the Israeli public.

The fear, however, is that an erratic President Trump, who will be fighting an uphill challenge for his re-election, will be highly unlikely to publicly oppose Israel so as not to upset his right-wing base and especially his most loyal Christian fundamentalist supporters.

Jordan and Egypt, the two Arab countries that signed a peace treaty with Israel, could potentially stop this disastrous development. But to do that, they will need the backing of the international community, and especially American Jewish groups who overwhelmingly oppose annexation.

The Arab League met last month to address the threat of annexation, and adopted a position stating, among other things, that Arab countries will support by all political, diplomatic, legal and financial means any decisions taken by the Palestinians to confront it. The Palestinian government is likely to push the Arab League to adopt the position that the existing peace treaties with Israel will be in jeopardy if the Netanyahu-Gantz government carries out this internationally rejected act.

But even such backing from the Arab League will not be enough to protect vulnerable countries like Jordan or Egypt. Arab countries will need active anti-annexation backing from the international community, including the U.S. public, in order to take the courageous stand of putting their strategic peace agreement with Israel on the table to block annexation.

Israeli right-wing extremists are concerned that their adored American leader might not be around for too long and are therefore trying to speed up West Bank annexation. While U.S. Democrats will most likely oppose any Israeli action that threatens the two-state solution, vulnerable Arab countries will need active, solid support from Americans.

Pro-peace American Jewish groups, who strongly oppose annexation, must vociferously ramp up their efforts to foil the plan, making common cause with other Americans who support the two-state solution. These groups have partners in Israel, including a coalition of five Israeli peace movements, who vociferously oppose the Gantz-Netanyahu annexation plan. A unified Arab opposition to the deal, the only possible firewall to prevent annexation, deserves the support of anyone who supports Israeli-Palestinian peace, including progressive American Jews.

The Israeli government and its allies in Washington must understand that the choices ahead have never been clearer than they are now. A move to unilaterally annex the West Bank or parts of it is a formula for pushing Israelis and Palestinians further into perpetual occupation and conflict, while furthering instability across the entire Middle East.

Playing into the hands of annexationist extremists could annul prospects for a negotiated Israeli-Palestinian peace settlement. Annexation would lead to a situation of not only de-facto but also de-jure apartheid in the West Bank.

As the Israeli Peace Now movement has stated, “It will send a message to the citizens of Israel, the Palestinians and the entire world that Israel favors the continuing bloody conflict and apartheid policy over democracy and peace.”

Daoud Kuttab is an award-winning Palestinian journalist and former Ferris Professor of journalism at Princeton University. His twitter handle is @daoudkuttab

Ori Nir, an Israeli-American, is a spokesperson for the Washington-based Americans for Peace Now and a former reporter with Israel’s Haaretz Daily and the Jewish Forward. Twitter: @orinir_APN