My fellow white Jews: We can’t sit this one out. 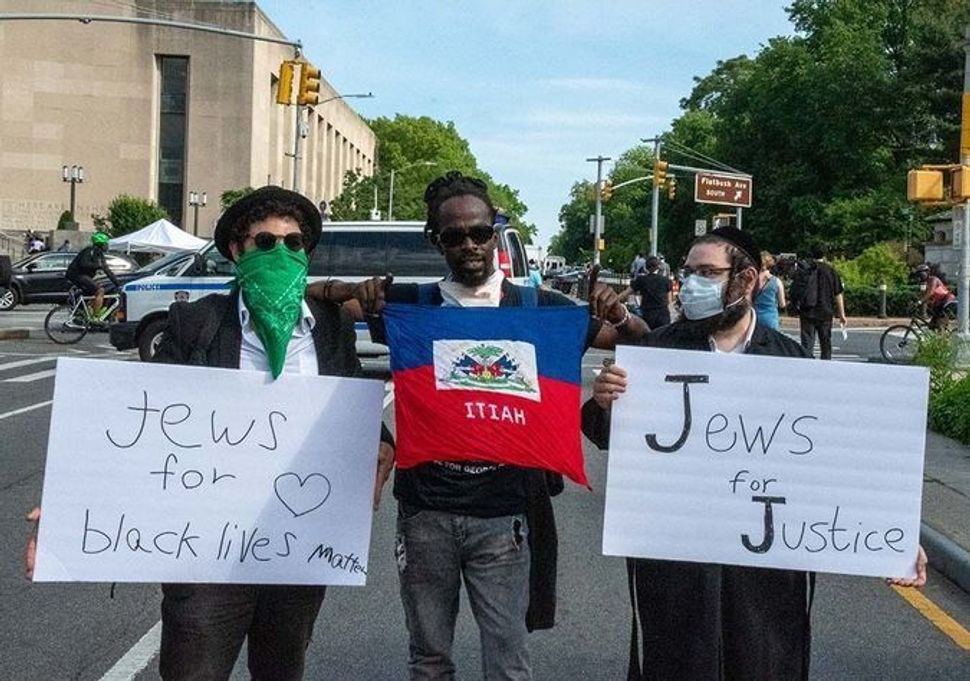 Jews for justice protesters take part in a demonstration at Grand Army Plaza in Brooklyn, June 4, 2020. Image by John Kunza

I want to speak to my fellow white-skinned Jews. You may be among the majority of us who are generally liberal and definitely do not think of yourself as racist. You may be more politically conservative and feel ambivalent about where racial equity fits in your political identity. Or you may be a single-issue voter around Zionist causes and feel this is not your fight.

Please understand, though: White Jews cannot sit this one out.

This moment of racial reckoning has directly to do with us — with both our Jewishness and also with our whiteness.

In the past, I’ve had a hard time checking “white” on forms requesting my race because I am Jewish, and in our history, “white” were the people who oppressed mine. But I also know that I get to pass as white on streets, in schools, and in business. We must reckon with that privilege and how it affects our lives and the lives of others.

Our history of suffering cannot be an excuse now. And it’s not just our Jewish empathy with oppression that should move us to action; it’s also our whiteness.

Here are some steps that have helped me try to take account of my white privilege and its interplay with anti-Semitism and Jewish identity. I humbly offer them to you and hope they may be helpful.

We must start at home

Put aside notions that you have to become an expert on policy and historical facts or march in the right protest. Some of us are able to do this and more but for many, this is not feasible, or leaves us feeling paralyzed by what we must eventually admit we do not know.

Start by confronting whiteness and how it operates in your congregation or community. Do the stock photos in your publicity feature exclusively white faces? Do your adult-education classes focus solely on a Euro-centric, Ashkenazi culture? Does your Hebrew school curriculum feature a significant exploration of Sephardi, Mizrahi and other Jewish histories and religious experiences?

Does your library feature authors and faces of color? Does your nursery school have dolls and toys of a variety of complexions?

If one of your responses, even inside your own head, is “Well, we are trying to pick things that look Jewish,” interrogate your assumption that Jews are white. Jews look like everyone.

We are a multiracial people

If you are upset by stereotypical portrayals of Jews in culture and media, let that extend to critiquing the portrayal of Jews as exclusively white — whether by non-Jews or within our own communities. When you ask that Jewish diversity be respected, include skin color and ethnic heritage. It’s inconsistent at best to say “Jews aren’t white!” when accused of white privilege and simultaneously deny the centrality of Jews of Color in the Jewish story.

Our assimilation is a story of chasing whiteness

If you are a white-skinned Jew, you know the ways your community, and likely your own family, assimilated after arriving in North America: name changes, hair straightening, nose jobs, dieting away those peasant hips, elocution lessons.

But it was not just assimilating to fit into America or Canada. Every act of assimilation white Jews have done has been to become more white — because white meant belonging, protection, access, success, and acceptability.

And it still does. That is white supremacy at work; we’ve internalized that white equals desirable and have mostly succeeded over the generations to become white. Our non-white or less-white or less-passing fellow Jews can’t. Sit with this.

White Jews are targeted and privileged at the same time

White Jews are not ignorant of oppression. Our people have been refused work and entrance to restaurants, universities, hospitals, clubs and whole towns for being Jewish. We have been beaten and shot and burned and made into soap for being Jewish. And we have been slaughtered while praying in our synagogues.

But right now, in this moment, white Jews aren’t followed in stores, systematically purged from voting rolls, assumed to be janitors, murdered by the police while sleeping in our beds or by vigilantes while jogging in our neighborhoods. That’s what we mean by white privilege: the way we’re visually categorized in a split second by the power structures of our society.

You can be Jewish and the child of Holocaust survivors and still benefit from white privilege — a privilege that accrues to you whether you’ve chosen it or not. White-skinned Jews are now visually classed as white almost all the time. Somewhere in us a voice protests, “How can you say that I and the people who murdered my people are the same!?” But in a society that values white skin above all other skin, this is indeed the case.

White supremacy is founded on anti-Semitism. Recall that in Charlottesville, they chanted, “Jews will not replace us.”

In white-supremacist and white-nationalist ideology, the success of non-white-led movements for equality is attributed to Jews. They believe we are the chaos-agents who have spawned all efforts to tear down the white way of life. Jews are seen as sneaky interlocutors seeding the race war and inciting black, Indigenous, and other people of color to rebel against white control. (Consider as a mild example the recurring conspiracy theory that George Soros, a white Jew and Holocaust survivor, is paying protestors by busloads.)

Black and Jew are uttered in one breath by white supremacists. This is essential to understanding our linked history and our place in it right now.

We don’t need to be at the center of this. But we shouldn’t be absent.

A common Jewish response to emergencies is to try to direct the action for the outcome we want. This has historically served us well, as we couldn’t really rely on anyone else to ensure an outcome that protected us. This is why when we arrived in a country or city, historically, we erected entire parallel civil society institutions; we take care of our own because we don’t trust anyone else to do it for us.

In this case, though, white-skinned Jews are absolutely not the center of this fight. We need to step back, to listen more than we direct, to amplify the voices of black, Indigenous, and other people of color, and — especially in our own communities — the voices of Jews of Color. We need to educate ourselves about how white privilege operates, and not impose on people of color to explain it to us.

But just because we are not the center doesn’t mean it’s not our fight. We must, however imperfectly, find our way by understanding how we both benefit from and are damaged by white supremacy and anti-black racism, by taking a hard look at ourselves and our history, and by finding our own individual role to take one more step towards justice.

Rabbi Julia Appel lives in Toronto and is the founder of Bina Community Circles. She leads progressive training workshops about anti-Semitism for universities and Jewish community organizations, and is grateful to her many teachers about equity and anti-Semitism, including Yavilah McCoy, Cherie Brown, Eric Ward, and the Facing History and Ourselves team.

My fellow white Jews: We can’t sit this one out.