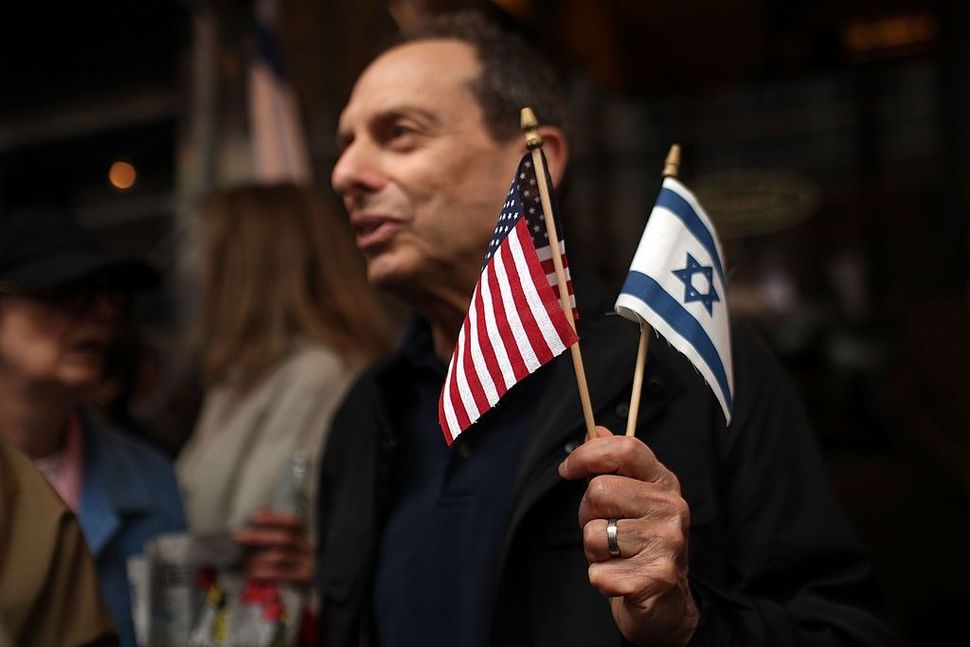 So, I make this plea to the Jewish ecosystem that raised me. Rise to meet this fraught moment. Image by Getty Images

I owe everything I am to the ecosystem built by visionary Jewish communal leaders. My life’s story is practically divided into chapters organized by Jewish experiences: forming an identity during starlit conversations at summer camp; deferring college to serve as an international president of the Jewish teen movement; volunteering around the world on Hillel-sponsored trips, rushing for my Jewish fraternity; visiting Poland as a fellow with the Jewish Council for Public Affairs; and leading the inaugural iTrek trip to Israel at Georgetown Law, to name a few. I even met my wife at a Moishe House.

I bring this all up to show that, in many ways, I’m an archetypical product of our community’s effort to engage millennials in meaningful Jewish experiences.

Unfortunately, I’ve also had to struggle with another experience common among Jews my age: feeling increasingly alienated from Jewish institutions that accommodate Israel’s creeping illiberalism.

But this is not another piece about the looming breakup between millennials, Israel, and the Jewish community.

This piece is about the urgent need to build a Jewish ecosystem that won’t crumble under the weight of Israel’s potential unilateral annexation of the West Bank.

We have made Zionism a centerpiece of American Jewish Identity through trips, conferences, and the messaging that we are connected to Israel in a deep, spiritual way. And unilateral annexation is antithetical to that same identity. It demands Israel sacrifice either its democratic or its Jewish character. It hastens the collapse of bipartisan support for Israel in the United States. It doesn’t make security, economic, or diplomatic sense. It further alienates a diaspora Jewry deeply committed to fighting injustice at home and abroad.

So, I make this plea to the Jewish ecosystem that raised me: Rise to meet this fraught moment.

That begins with acknowledging that we all played a role in letting things get this far. I lived this firsthand. I became a Zionist on trips to Israel during my formative years and an advocate at AIPAC events. Learning more about Palestinian living conditions, as well as my community’s response to them, tested my beliefs. I was shocked as my local JCRC voted to exclude J-Street from its membership under the pretense that it was not a Jewish organization. I was discouraged that a panel I attended about outreach to progressives at a mainstream conference labeled Black Lives Matter as radical activists and ignored good-faith objections from American Jews.

Indignant with Israel’s traditional champions, I hoped emerging liberal organizations could better represent my Zionism. But I left my first and only IfNotNow event appalled when the local chapter leader dismissed the question of where Jewish refugees were supposed to go in 1948 as unimportant. I tried more groups but continued feeling dejected. Regrettably, I disengaged from “the Israel conversation” for years. I wish I did more.

My personal journey illustrates how the broader Jewish ecosystem opened up space for annexation to become a credible policy position. Organizations are understandably hesitant to tell the Israeli government how to act. But this instinct cedes the floor to groups that appropriate Zionism to advance their own agendas.

On the right, groups paternalistically question whether Democratic Jews (i.e., most Jews) are disloyal to Israel and euphemistically cite “Judeo-Christian” values to justify policies most American Jews abhor. Meanwhile, on the left, bad-faith actors masquerading as concerned Zionists support or ignore efforts to delegitimize Israel and villainize organizations critical to Jewish continuity for even minor affiliations with Israel.

In the meantime, mainstream American Jews — and their policy preferences — have moved further away from the center of the U.S.-Israel relationship. Our key communal organizations have lost credibility and influence. And polarization and fragmentation have empowered those with extreme views, like annexation.

But now is not the time to despair. The threat of unilateral annexation is calling me to action. I recognize that Jewish institutions have different missions and politics, but these are historic times. Those committed to racial, economic, and social equity are responding to an unprecedented failure in leadership with righteous and rightful fury. They have helped the public see that performative allyship and toothless solidarity perpetuate injustice.

We must meet this moment by creating a healthier Jewish ecosystem. One strong enough to discuss current events with integrity and courageous enough to confront them unequivocally.

First, Israel advocacy organizations must unite to create space for effective progressive Zionism. Mainstream groups are caught in a trap of their own making, stuck between their values and current events. Still, organizations defined by opposition to these groups need to recognize that the battle to represent Jewish voices is not the one that matters.

Israel is in danger of becoming a partisan issue. The only remedy is building a bipartisan coalition. Now is not the time for progressives to pile on and dilute our aggregate political power, and we’re well past the time where mainstream groups can evade fair criticism with whataboutism. We must make room for all in the fight against anti-Zionism.

Second, more Jewish organizations must be vocal about the implications of an antidemocratic Israel. Annexation affects everyone. What will happen to even the most benign trips to Israel in this new context?

I have friends leading a trip to Israel that already had to stop recruiting on social media because activists argued the trip was complicit in oppressing Palestinians. Just imagine how much worse this will get if Israel begins resembling an apartheid state. Organizations cannot ignore reality by claiming they are apolitical in an increasingly politicized space. So, weigh in. Your words pressure decision makers and signal authenticity to our own community.

Third, funders must encourage grantees to embrace the above behaviors. Support groups fighting against Israeli illiberalism. Allow them to spend money on political events and work with organizations that criticize Israel. Replace funds right-wing donors withdraw. Demand grantees plan for a post-annexation world. Help diversify grantee leadership structures and lower barriers of entry for those not touting the party-line on Israel. Give the ecosystem permission to evolve, or at least get out of the way.

A growing number of organizations are already taking a stand and thinking about these issues. But it’s time for the rest of us to catch up. The leadership I see now is not the leadership I was taught years ago.

Unilateral annexation threatens to break an American Jewish experience centered on Israel, and one that I hold dear. We cannot let it.

Brandon Rattiner is an environmental attorney and the former Denver Area Regional Director for U.S. Sen. Mark Udall. He is a past international president of BBYO and currently a member of Washington DC’s IPF Atid Steering Committee.