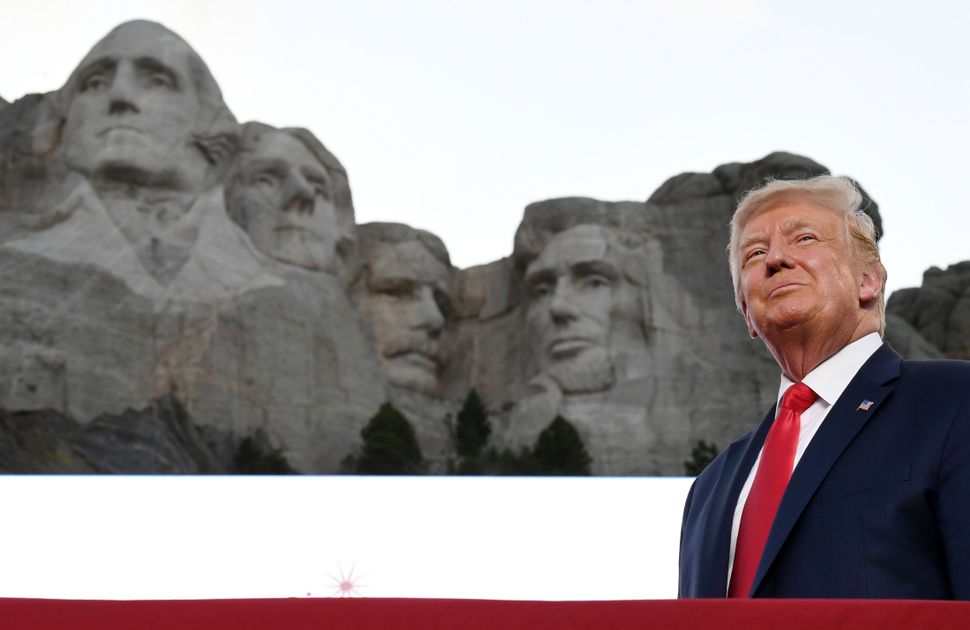 On Friday, President Trump rang in Fourth of July weekend with a speech and fireworks display at Mount Rushmore in South Dakota, a stark contrast with the large number of fireworks displays that were canceled across the rest of the country due to the coronavirus pandemic. Though the Rushmore celebration attracted much attention for the lack of social distancing and masking required of attendees, commentators also noted the striking content of the president’s speech. While most other presidents have used the occasion of the nation’s Independence Day to urge public unity and goodwill, Trump instead delivered a “dark and divisive speech” in which he warned about “a new far-left fascism” seeking to destroy the history and values of the United States, a “left-wing cultural revolution… designed to overthrow the American Revolution.” A far cry from “Yankee Doodle Dandy” indeed.

The president’s Rushmore address was not good news for the Jews. While Trump did not, of course, mention Jews explicitly during his speech, I could not help but hear in his warnings against “years of extreme indoctrination and bias in education, journalism, and other cultural institutions,” echoes of the “cultural Marxism” conspiracy theory that has taken hold on the American far-right in recent years.

The president’s defenders at Fox News certainly heard it that way, praising Trump’s attacks on “cancel culture and the rise of the Marxist ideology.” And this language of “cultural Marxism” can all too easily slide into anti-Semitism.

To understand why, we need to review a bit of history about this term, and the way it functions in American far-right mythologies. The right-wing Christian journalist William S. Lind, a key proponent of this particular conspiracy theory, defines “cultural Marxism” as “political correctness” or “Marxism translated from economic into cultural terms.” According to classical Marxist theory, when the Russian Revolution broke out in 1917, workers all across Europe should have joined together to overthrow capitalism and create a new socialist society. But when the more heavily industrialized nations of Western Europe failed to join in the revolution, Marxist theorists needed an explanation for this failure. And so, they turned to popular culture.

As Lind would have it, whereas classical Marxist theory was wholly focused on economic relations between classes, seeing culture as no more than an outgrowth of economics, this new brand of “cultural Marxism” taught that “Western culture and the Christian religion had so ‘blinded’ the working class to its true (Marxist) class interests that Communism was impossible in the West until traditional culture and Christianity were destroyed.” Thus, Marxist theory after the Russian Revolution would have to seek cultural as well as economic transformation.

To a limited degree, Lind was correct: An array of diverse thinkers from different backgrounds were involved in this rethinking of Marxism after the Russian Revolution. And the most famous circle crystalized in Germany in the early 1920s around the newly-formed Institute for Social Research, more commonly known as the Frankfurt School. The Frankfurt School was instrumental in the development of critical theory, a school of thought that critiqued both cultural and economic structures in society with the explicitly political goal “to liberate human beings from the circumstances that enslave them.”

In practice, this often meant analyses of culture that integrated Marx with insights from that other great European Jewish intellectual, Freud. And significantly, nearly all of the thinkers associated with the Frankfurt School, including such famous luminaries as Theodor Adorno, Herbert Marcuse, Max Horkheimer, Erich Fromm, and Walter Benjamin, were Jewish.

You can see where this is going. In 1933, the rise of Nazism forced the Jewish anti-fascist intellectuals of the Frankfurt School to flee Germany for New York, where they set up shop at Columbia University. And from there, as the Southern Poverty Law Center explains, the conspiracy theory took hold of a hidden group of foreign émigré Jewish intellectuals who “devised an unorthodox form of Marxism that took aim at American society’s culture, rather than its economic system… to try to convince mainstream Americans that white ethnic pride is bad, that sexual liberation is good, and that supposedly traditional American values — Christianity, ‘family values,’ and so on — are reactionary and bigoted.”

The theory was so successful because it was so adaptable. Any rapid change in American cultural norms could be blamed on these Marxist Jews seeking to undermine white Christian culture from within. The theory became especially popular in the 1960s, when students associated with left-wing movements like the anti-Vietnam War movement and the movement for sexual liberation cited the Frankfurt School thinkers as an influence. David Neiwert, who has researched cultural Marxism, writes that for those who believe in this theory, “nearly all of the modern expressions of democratic culture — feminism, the civil rights movement, the ‘60s counterculture movement, the antiwar movement, rock and roll, and the gay rights movement — are eventually all products of the scheming of this cabal of Jewish elites.”

It’s a perfect conspiracy, really. According to Alana Lentin, cultural Marxism relies on long-time anti-Semitic tropes about a cabal of foreign Jews pulling strings behind the scenes, to advance the idea that “the West is subject to manipulation from foreign forces within.” And that, in turn, lets the far-right avoid confronting the real grievances driving movements for cultural change. Easier to blame the Jews for new standards of sexual morality that emerged in the 1960’s, as many right-wing voices did.

Easier for President Trump to blame schools that supposedly teach our children “to hate their own country” as the real motivation for the movement to tear down Confederate statues across the United States. That way, he doesn’t have to acknowledge the fact that most Americans in fact support removing these statues.

That’s the conspiratorial history that President Trump invokes when he blames schools and educational institutions for preaching a “left-wing cultural revolution” to destroy the nation’s history — just as those who spread the “cultural Marxism” conspiracy theory claim that this ideology “dominates both public and higher education.”

Of course, it’s entirely possible that Trump used these words without knowing their anti-Semitic history, and most Americans will no doubt hear this rhetoric without thinking about Jews at all. But for white supremacists, these words are a clear dog whistle. It isn’t coincidental that when William Lind first coined the term “cultural Marxism,” he did it in a speech to a Holocaust denial conference, in which he helpfully clarified that “these guys were all Jewish.”

And the rhetoric of cultural Marxism already has a body count. The far-right gunman who attacked a Chabad in Poway, California in April 2019 wrote before the shooting that he hated Jews for their “role in cultural Marxism.”

So when I hear the president of the United States go to Mount Rushmore, one of the great symbols of American culture, and warn in dark tones about a “left-wing cultural revolution,” I can’t help but worry that such words are bad for the Jews. Trump may not have explicitly mentioned Jews at Mount Rushmore. But for a certain segment of the far-right, he may as well have.

Joel Swanson is a contributing columnist for the Forward and a Ph.D. student at the University of Chicago, studying modern Jewish intellectual history and the philosophy of religions. He identifies as culturally Marxist, but not actively practicing. Find him on Twitter @jh_swanson.